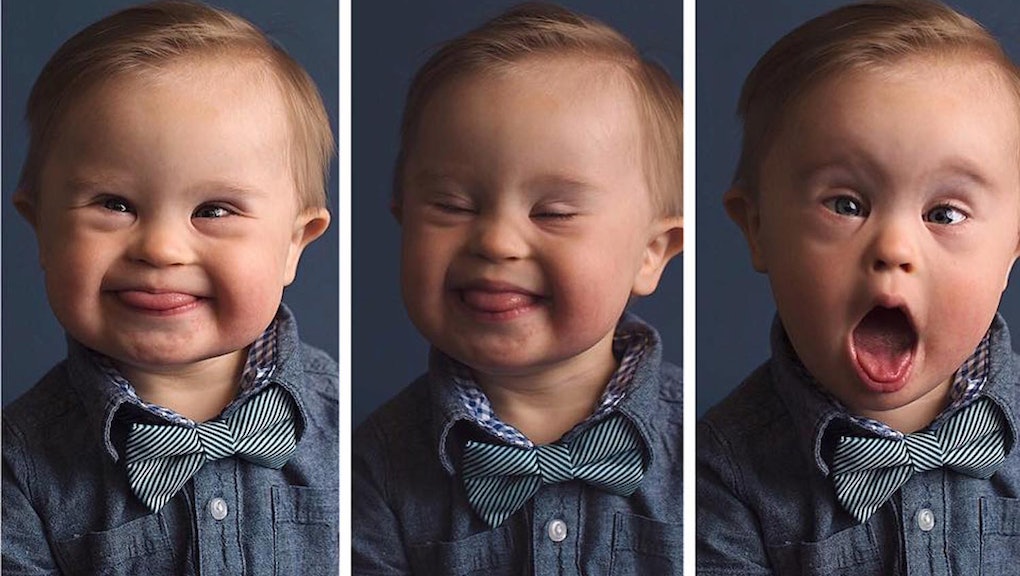 Meagan Richter Nash thinks her 15-month-old son, Asher, would be the perfect child model. After all, he has the chubby cheeks, the bright blue eyes and the winning, contagious smile.

So over the summer, in an effort to get his career started, Nash sent a series of photographs of Asher to a local online modeling agency that had put out an open casting call for a children's clothing company. But then, a modeling agent told her that she wouldn't be submitting the images of her son.

"She emailed back staying she wouldn't be submitting him because the criteria didn't specify they were looking for a baby with special needs," Nash said in an interview with Mic. "That puzzled me and so I asked if they had said they did not want a baby with special needs. When she said no, that they didn't specify either way, I asked why we wouldn't always sending [them] then."

What was their reasoning? The agency just assumed that the children's clothing company, Carter's, wouldn't want a child with special needs in their ads.

And that, of course, was frustrating to Nash. Although the agent agreed to stop not sending out Asher's photos, Nash still wanted people to know about her son. So she posted a photoset of him to the Facebook page Changing the Face of Beauty, which aims to promote the idea of including people with disabilities in ad campaigns.

"We aren't giving up!" Nash wrote on the page. "This handsome boy is ready to show the world what #ChangingTheFaceOfBeaty is!" She then asked for specific brands, like OshKosh B'Gosh, which is owned by Carter's, to take notice of her son and kids like him.

Shortly thereafter, the popular Facebook page Kids with Down syndrome reposted the image.

So far, the original post has been liked more than 800 times and shared 200 times, and on Kids with Down syndrome, it's been shared more than 125,000 times.

The reasons why Nash is so passionate about getting her son and children like him into modeling all boil down to her belief that inclusion and representation in fashion leads to more acceptance by society as a whole.

"It's important to feature people with special needs in advertisement for three reasons. The first reason is inclusion," Nash said.

"People with disabilities want to be included amongst their peers in life in general and being seen in advertisement is apart of that. The second reason, which is very near and dear to my heart, is acceptance. Without truly accepting my son and others with special needs, there can be no inclusion for them in the future. And the last reason is respect. Using people with special needs shows the world that these people have value and worth just like any typical person does."

What would make all the difference, according to Nash, is if a large children's company, such as OshKosh B'Gosh cast a child like Asher in its ads, but not just because he has Down syndrome.

"I don't want them to use him because of this fuss we are making on the internet," Nash said.

I want them to use him because they value him and see how much he could contribute to their advertisement. Asher was born to be in front of the camera, just look at his pictures! With that said, children with Down syndrome and all other disabilities are incredible human beings and we want Oshkosh to help us change the worlds perception.

And according to Nash, OshKosh has officially heard her call. Earlier this week, she and Asher met with the company and according to the Georgia mom, we'll be seeing the results of that meeting soon.

"My goal was to spread awareness about the issue and my hopes were for OshKosh and many more brands to start including people with disabilities in their brand," Nash said. "The world is always changing, and so is our perception of people with Down syndrome and other disabilities. I want people to be able to see my son or others like him in an ad and not instantly say, 'Oh, he has Down syndrome.' I want them to say, 'Oh I love that shirt that baby is wearing, I want that for my child!'"