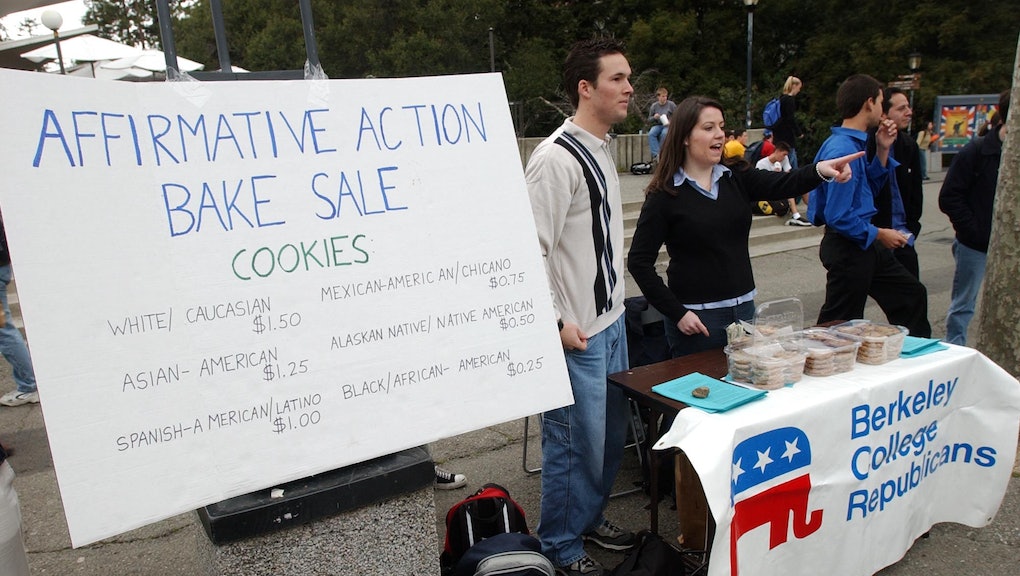 On Wednesday, the Young Conservatives of Texas group at the University of Texas at Austin held an "affirmative action" bake sale charging prices for dessert based on different ethnicities, the Huffington Post reported.

"Our protest was designed to highlight the insanity of assigning our lives value based on our race and ethnicity, rather than our talents, work ethic, and intelligence," Vidal Castañeda, the group's chairman said in a press release. "It is insane that institutional racism, such as affirmative action, continues to allow for universities to judge me by the color of my skin rather than my actions."

In response, more than 100 students counter-protested the bake sale. Ashley Choi, a senior at the University of Texas, filmed the entire bake sale on a Facebook live and captured crowds of students confronting inaccurate myths about affirmative action.

"An elderly Latina woman, who is a student here at UT, and a black student wearing a black and red dress were trying to explain to the young conservatives why affirmative action was implemented in the first place," Choi told Mic's Emily Watson.

In response to the uproar, the organization released a statement blaming "liberal elites" for attempting to silence conservative voices.

"The First Amendment to the U.S. Constitution guarantees our organization freedom of speech and expression," Castañeda said. "YCT-UT will not be deterred by liberal elites that would love nothing more than to silence conservative, common sense voices on campus."

The conservative group claims that "affirmative action," a policy where colleges can use race as one factor for admission, is inherently racist and discriminatory for attempting to increase diversity in schools and providing opportunities for students who belong to "historically disadvantaged groups," the Huffington Post reported.

The University of Texas at Austin was the battleground for affirmative action over the last several years when a white female applicant, Abigail Fisher, sued the university for denying her admission. Fisher, who had poor grades to begin with, lost her Supreme Court case in June. As a result, the court upheld affirmative action in the college admission process.

White women benefit the most from affirmative action policies. According to the Huffington Post, white students are in the majority at the University of Texas at Austin at 45.1%. The enrollment includes 19.5% Hispanic students, 17.2% Asian students, 3.9% black students and only .2% Native American students.

"We believe the Constitution is colorblind and everyone should be treated equally regardless of race, gender, orientation, whatnot," Castañeda said to Choi in the Facebook Live video. "Everyone should be judged based on merits."

Well, if they truly believe that an individual's qualifications should be based on merits rather than race or gender, then let's hope the next bake sale is one to bring awareness to the wage gap.