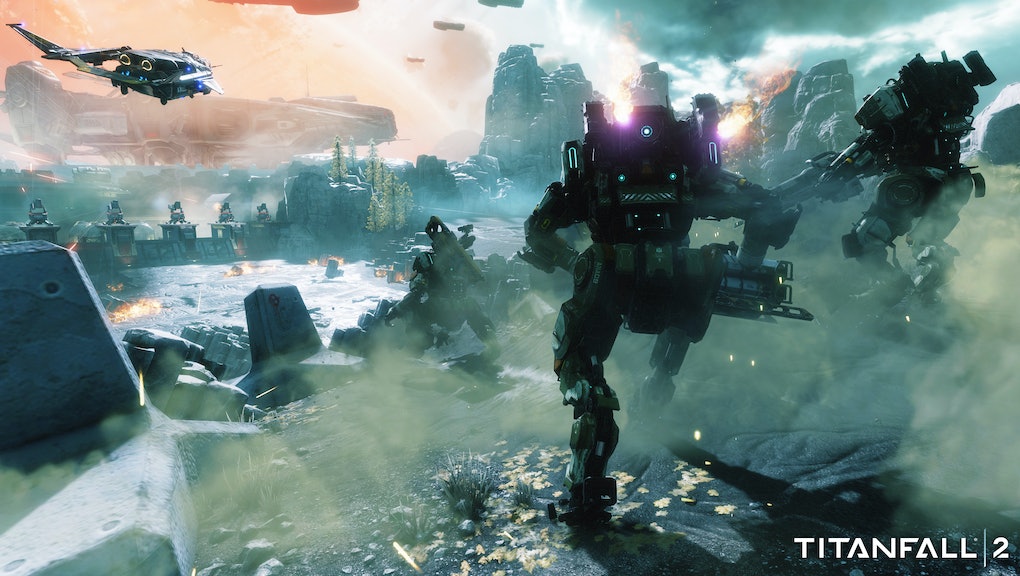 'Titanfall 2': Gameplay, trailer and what to expect from the new game out Friday

Titanfall 2, a brand-new first-person shooter from Respawn Entertainment, is coming out this Friday for PS4, Xbox One and PC. Here's everything you need to know about it.

The story takes place in the near future and centers around Jack Cooper, a pretty plain, white-bread soldier who suddenly finds himself working with BT-7274 — a giant, super-advanced robot called a "Titan."

BT can function fully autonomously, fighting bad guys and making decisions of its own, but Cooper can also hop into BT and command it from within, like this:

Typically, only highly qualified "pilots" can command these Titans, so Cooper has to learn how to handle BT on the fly.

Together, they fight back against the oppressive colonization of the Interstellar Manufacturing Corporation, a kind of stereotypically evil militarized corporation that pillages and plunders planets, killing whomever gets in their way.

In terms of actually playing Titanfall 2, you'll spend about an equal amount of time outside BT as you will inside.

When you're on foot, the game plays like a pretty standard first-person shooter, but with a surprising amount of really fun platforming. You can double jump, run on walls and sprint blindingly fast.

For example, here's a GIF of my own gameplay footage, where you can see me running along a wall, hopping to another and then knocking out a few enemies right as I land:

I have yet to play the multiplayer mode of Titanfall 2, but here's a basic overview.

Like in the campaign, the multiplayer will have you play both on foot as a soldier and inside giant Titans. BT is nowhere to be found, though. Instead, you'll be able to play as six different types of Titans, each of which have different strengths and weaknesses. The Titan called Ronin, for example, wields a giant sword. Another, called Scorch, can shoot jets of fire.

There are a few different multiplayer modes to choose from — nothing really worth describing in extreme detail. The biggest change here relative to the first Titanfall is the addition of those new Titan archetypes.

Also of note is every new map and mode added to Titanfall 2 multiplayer after launch will be available for free. The first Titanfall charged players for additional maps and modes, which fragmented its players based on who bought what. If your friend bought the latest map but you hadn't, for example, you wouldn't have been able to play there together.