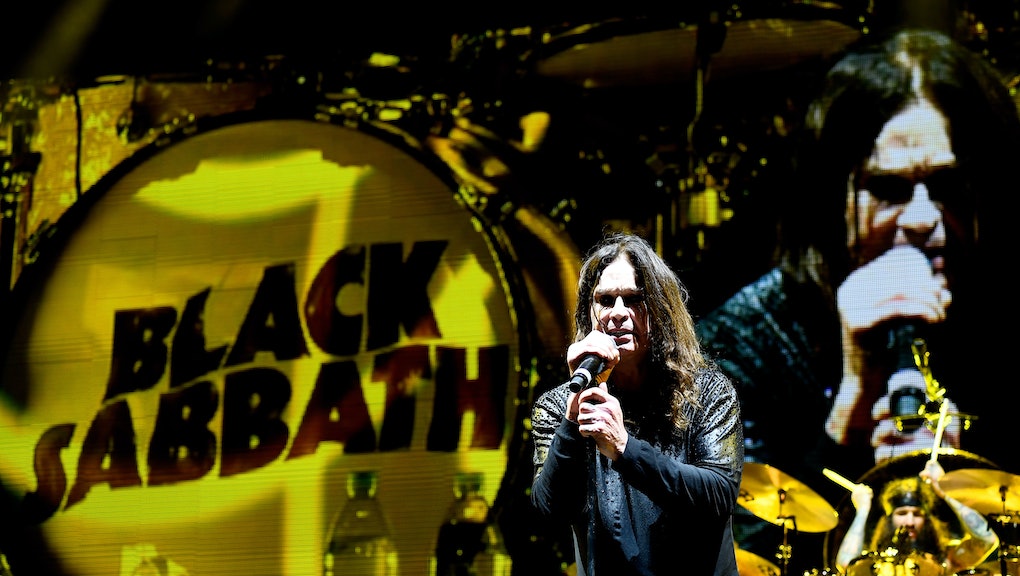 Rock 'n' roll has always been the devil's music. From its very blues beginnings, opponents have always decried the genre as being here to corrupt the America's youth and turn them towards the infernal powers of the world.

If all those parents horrified by Elvis only knew what the genre would become.

Artists have played into the rock 'n' roll's inherent occult connection to varying degrees throughout rock history, and it's helped lend the genre a certain transformational power. In his book Season of the Witch: How the Occult Saved Rock and Roll, Peter Bebergal argues exactly that if artists from Black Sabbath to the Beatles had never embraced rock's occult roots, it never would have become the global cultural phenomenon it became.

There's no better time of year to celebrate all the infernal powers of the world have offered the genre than Halloween. Below is a track list of the some of the most ghoulish hymns in rock history. They prove one doesn't have to pull out a full guttural pig voice to make a dark rock track.

Originally intended to be a soulful ballad, blues godfather Screamin' Jay Hawkins recorded something very different after entering the studio after consumed a pile of wings, ribs and booze. He let those take over. "I don't even remember making the record," Screamin' Jay once said of it. "Before, I was just a normal blues singer ... I found out I could do more destroying a song and screaming it to death."

Now remembered as one of the most important acts in rock history, responsible in part for the birth of metal, when Black Sabbath first came on the scene critics derided their work. Rolling Stone's Lester Bang described them as "velocitized speedfreaks all over each other's musical perimeters yet never quite finding synch — just like Cream! But worse." But their music still found its audience and it haunted them thoroughly enough to keep them coming back for more.

With "Helter Skelter," the Beatles set out to make the loudest, raunchiest rock song possible — and they succeeded. Very little about it comes off as conventional, easy sing-song Beatles. However, the darkest aspects of the song's lore came long after the recording and release. That was Charles Manson's doing. The infamous cult leader became fascinated by the song and interpreted it as being a sign of a coming race war that was his responsibility to instigate. His interpretations scared the shit out of the authors, and it was the last hard rock song they'd ever do.

Punk act the Misfits took the relationship between horror and rock 'n' roll to entirely new levels of commitment. Their debut is like Sam Raimy's beloved campy gorefest the Evil Dead translated into punishing 4-chord rock. The band has been trying to put aside their differences this year to play a set of reunion shows, but haven't had the easiest time keeping themselves together.

Instead of playing out a straightforward horror fantasy like so many of the other acts on this list, California punk outfit the Dead Kennedys take aim at the social conventions surrounding the holiday. Why is there only one day a year when it's acceptable for people to act like the freaks they really are? Why not all year? "Why don't you take your social regulations/  And shove 'em up your ass?" as frontman Jello Biafra sings.

Off Bowie's farewell album, "Blackstar" paints a dramatic scene of a black mass-esque execution. The singer describes a possession that takes hold of the song's central figure right before he dies: "Spirit rose a meter and stepped aside," he sings. "Somebody else took his place, and bravely cried: 'I'm a black star." They're words that are all the more eerie knowing Bowie was to pass only a few days after releasing the song into the world.

Radiohead's "Burn the Witch" borrows similar themes from Bowie's "Black Star." As the video reveals, the song seems to chart out a Twin Peaks-esque narrative in which some sort of inspector comes to explore a small village, only to find out them engaging in strange sacrificial practices. Nothing spells Halloween like a good claymation witch hunt.