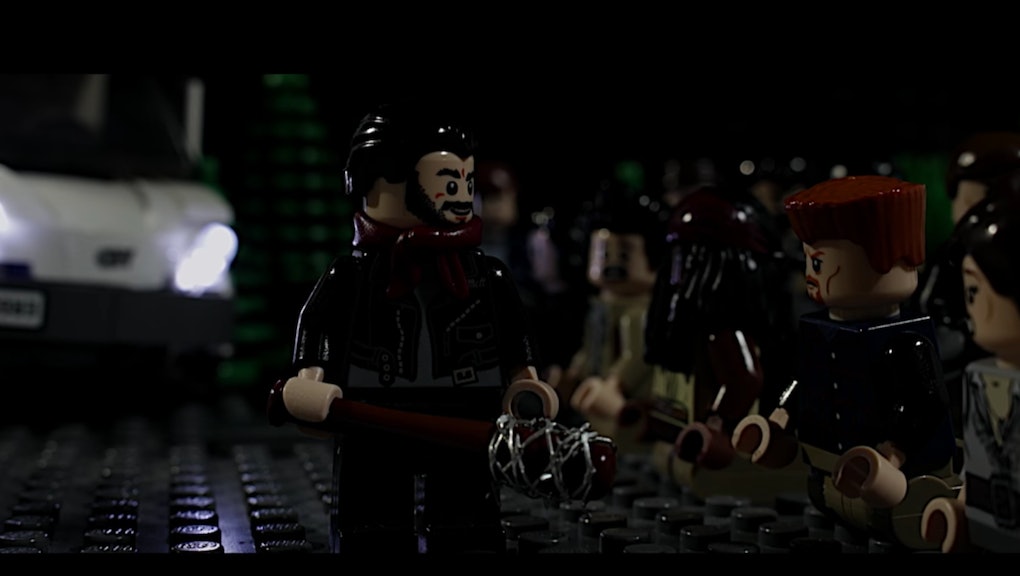 Someone recreated 'The Walking Dead' double murder with Legos — which is not cool, man

It's hard for fans of The Walking Dead to get the disturbing image of Abraham and Glenn's brutal deaths at the hands of Negan in the show's season seven premiere out of their heads, and the internet isn't exactly helping. There's Entertainment Weekly's "Dead Glenn Talking" cover for their next issue — a spoilerific reminder of what went down. Now, there's even a Lego recreation of the scene.

The work comes from YouTuber kristo499, who noted in the video description that it took "forever to make." It's easy to see why: In the place of Lego bricks, there's a ton of improvised blood and gore, such as Glenn's face after one of his eyes is popping out of his socket.

All else aside, the Youtuber deserves a lot of credit, as it's a faithful and detailed recreation of the scene, complete with the original audio from the premiere. As a few outlets that covered the video have noted, it's "just as gruesome" if one can "stomach the carnage again."

But there's a disturbing precedent in recreating such a violent scene (so graphic that it's been censored for the U.K.) by using children's toys. The show has already taken a lot of heat for fetishizing Negan's kills — and rightfully so — that fans needn't stoke the fire by embellishing it further.

This isn't a knock on using Legos for fan-created tributes. YouTube has a steady and passionate fan culture for recreating popular series and films in the form of the toys. The same user, kristo499, has done similarly terrific work with a Lego stop-motion for The Force Awakens trailer, in which no skulls are brutally bashed in.

If there's anything from The Walking Dead's seventh season that's worth a Lego remix, it's the forthcoming appearance of a CGI tiger named Shiva — who could be the lone bright spot in a drama seemingly devoid of hope.