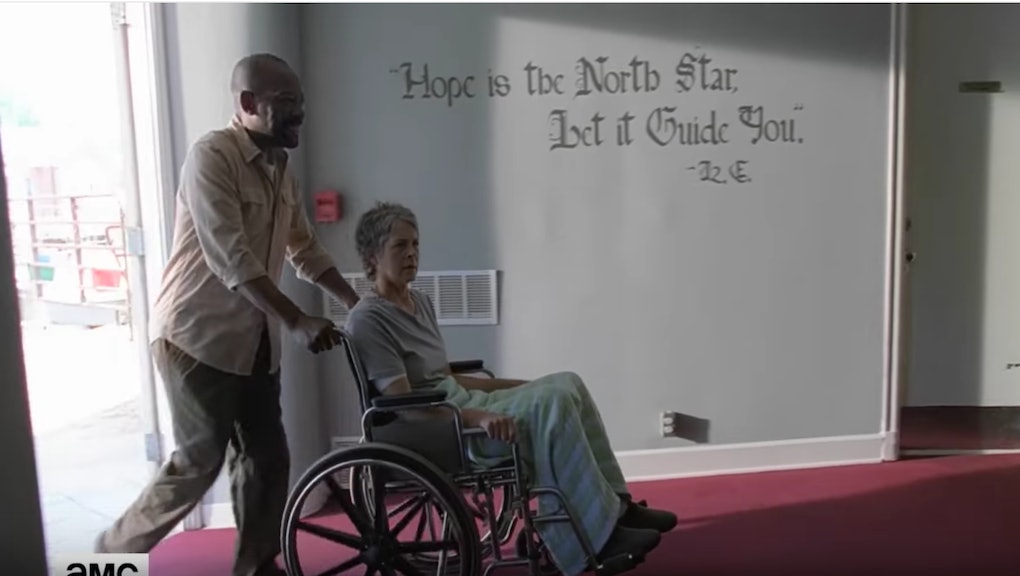 What will happen in 'The Walking Dead' season 7, episode 2? Here's what we know.

For the zombie series, we're going to go out on a limb here and assume that nobody from Rick's crew will be beaten to death with a baseball bat, which, on a show with an infinitesimal amount of hope, is probably a win. Instead, the show will move on from Negan's bloody introduction — remember, there's some kind of narrative here! — and likely catch up with the rest of the group that wasn't at Negan's mercy.

Based on an early sneak peek of the second episode by AMC, this means touching base with Carol and Morgan, who were picked up at the end of season six by a couple of guys clad in absurd-looking body armor. For fans of the comic books, that meant one thing: We're going to check out the Kingdom.

The Kingdom is where — in the AMC clip — we see Morgan explaining the community to an injured Carol as he takes her to meet their leader, King Ezekiel.

"Uh, what does that mean?" Carol responds.

Ezekiel's introduction eliciting that type of response from Morgan is exciting news, because it means we're very likely to also meet his pet tiger, Shiva. Yes, there's a tiger in the zombie apocalypse, which is awesome.

Imagine all the narrative possibilities with a tiger: We can learn about how wild animals fare after society falls; we could see Shiva eat a zombie. There has to be some type of protocol for other members of the Kingdom approaching this tiger — would a courtly bow suffice? — and trying not to get mauled. Of course, there's always the chance Ezekiel rides off into the distance with Shiva to face Negan and his barbed wire-covered baseball bat, Lucille. We're taking Ezekiel and Shiva over Negan and Lucille in this still-hypothetical brawl — delivering a monologue of rules will be Negan's downfall.

The Kingdom is an important part of the comic book storyline — they're an ally for Rick and the group in the inevitable clash with Negan and the Saviors. But before we can get to all of that, we have to be introduced to the new community. The forthcoming episode should, at a minimum, achieve this.