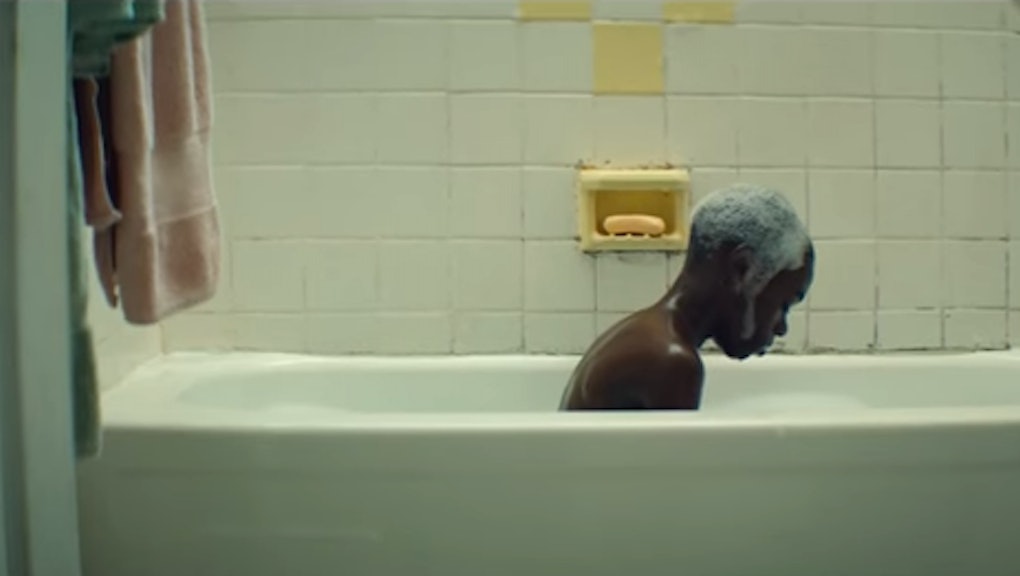 The Birth of a Nation, Nate Parker's slave revolt drama released in theatres Oct. 7, starts with Nat Turner as a child in the woods in Southampton County, Virginia. The year is 1809. At a campfire, enclosed by a ring of chanting black faces, an elderly shaman grabs the boy's hands.

"He is a prophet!" the man shouts. The chanting grows louder around them.

Barry Jenkins' Moonlight, released Oct. 21, begins with an ordination of sorts, too. Chiron, an elementary school-aged black boy, is chased through the overgrown yards and abandoned houses of Liberty City, Miami, Florida. It's a poor, predominantly black neighborhood. The present day, or close to it.

"Get his gay ass!" shouts one of the pursuers, all of whom are also young black boys.

Nat Turner — true to prophecy — grows up to be a man driven by a sense of divine purpose. In 1831, he meets his destiny at the end of a hangman's noose after leading a rebellion of enslaved black people that claims the lives of more than 60 white slave-owners.

Chiron's story is less cut-and-dry. He drifts from one stage of life to another — childhood, adolescence, young adulthood — dogged by a profound uncertainty about who he is, what he wants and where he'll end up.

It is significant that both films concern black boys as they grow into black men — and not just because the American film industry is dominated by white men who have provided little space, traditionally, for stories about black people (both films were also written and directed by black men).

It is significant because it is instructive. We learn how to perform who we are from those around us, but also from portrayals in popular culture. Both movies reflect and shape what it means to be a man — whether it's sure-footed, aggressive and driven, in the case of Nat Turner, or unsure, vulnerable and searching in the case of Chiron.

If we accept that masculinity is not innate, but is mediated and molded according to social norms, it seems clear that The Birth of a Nation and Moonlight — two of the few movies made by black filmmakers that will enjoy a wide release in 2016 — reflect versions of how black manhood should be expressed. They are fingers on the pulse of the culture.

"I refuse to allow any piece of work to emasculate me," Nate Parker — the writer, director and star of The Birth of a Nation — told MadameNoire in 2014. He was discussing his acting career to that point. Nearly all of his roles had been calculated choices that emphasized positive, uplifting portrayals of black men.

This attitude is apparent in his film. Black masculinity, as a rule, has for centuries been defined as an accommodation to whiteness. It's been a lethal dance, characterized by the expectation of servility and deference to white needs, desires and fears. The Birth of a Nation is Parker's retort. It centers a character who resists emasculation, who arms himself turns white violence against its original perpetrators.

As Turner's journey unfolds, it charts a familiar path to manhood as well. He fulfills the traditionally masculine role of protector and caretaker. In an iteration of the "damsel in distress" motif, Turner meets his wife, Cherry for the first time when he "rescues" her from a group of leering would-be slave-buyers by convincing his own master, Samuel, to purchase her. She'll make a good gift for your wife, Turner suggests. The ploy is successful, and the object of his desire becomes the property of his owner.

Turner's paternalistic relationship to Cherry later becomes kindling for his blood-soaked rebellion. In an audacious departure from anything we know about Turner as a historical figure — the film is based on true events but the record is unreliable, leaving Nate Parker with significant creative leeway — he decides to enact vengeance on local slave owners and their families after a group of white patrolmen beat and gang rape his wife.

Even as he chops and bludgeons his way through Southampton County, Turner is propelled by what he believes to be the moral authority of God — which lends him the ultimate veneer of certainty — justifying bloody retribution on behalf of his woman. He is an itinerant preacher by trade, teaching subservience and obedience to enslaved blacks on different plantations in exchange for cash paid to his master. But when Cherry is raped, the Bible verses he speaks shift dramatically, from advocating submission to one's masters to violent rebellion against them

All told, it is a standard, even boring male-driven Hollywood hero-martyr story, a poor man's Braveheart set in the antebellum South. It closes with Turner's original prophecy fulfilled — a far neater and more predictable ending than anything afforded Chiron, the protagonist of Barry Jenkins' Moonlight.

Where Nat Turner's childhood is marked by traditional masculine tropes and clear answers to what his future will hold, Chiron's boyhood, adolescence and adulthood are mired in questions, uncertainty and an ambiguity around his sexual orientation which sets him apart from the typical male Hollywood protagonist.

"What's a faggot?" Chiron asks Juan, a local drug dealer who becomes a father figure to the boy, in one of the earlier scenes. It is a term Chiron's young tormentors in the neighborhood have called him.

"It's a word people use to make gay people feel bad," Juan replies, after some hesitation.

"No," Juan says, tenderly, though he suggests that Chiron may be gay. "But," he adds, "you ain't got to know [what you are] right now."

Uncertainty about one's identity is a recurring theme in the film. It is never made explicit that Chiron is gay, but from the beginning, he is marked as an outsider by the other boys. He is smaller and more reserved than they are. Taunting him with anti-gay slurs seems more a method of setting him apart than a reflection of anything he's actually done. Only much later does he have a romantic encounter with another boy, Kevin, and even then, it happens just once and remains a secret between them. He never "comes out."

As Chiron navigates masculinity's rules and pitfalls, he learns his inability to meet the other boys' standards is a double-edged sword with violent consequences. As a teenager, he continues to be ridiculed and beaten by bullies with regularity. One boy is especially cruel: He shoves Chiron around, derides him for suffering from so-called "lady problems" and — in a test of the other boy's allegiance to the in-crowd — goads Kevin, Chiron's one-time lover, into punching Chiron in the face in front of his schoolmates.

"At some point, you got to decide for yourself who you're going to be. Can't nobody do that for you." — Juan in 'Moonlight'

Chiron is finally pushed to the breaking point and responds for the first time in his life with violence. He walks into his classroom one day and, without saying a word, smashes a chair over his tormentor's back.

He is arrested for the incident and ends up spending time incarcerated. The scene marks a dramatic turning point in the film — the moment Chiron transforms from a vulnerable youngster into a laconic grown-up drug dealer who buries his insecurities, and any hint of emotional intimacy with another person, beneath a facade of nice cars, gold fronts and a pistol.

That Chiron experiences these struggles in an entirely black space — there is not a single white character in the film — makes Moonlight one of the rare films to reckon with how queerness and blackness intersect. Rarely do we see such nuance applied in black-focused cinema, primarily because black cinema is so rare. It is a validating development. Moonlight gives a name and face to black experiences with manhood that almost never get screen time in a storytelling mode where machismo and resistance to so-called emasculation is the norm.

By depicting Chiron's struggle in all its raw honesty — and rendering it using such beautiful and tender craftsmanship as Jenkins and his cinematographer, James Laxton, apply — Moonlight assures us this is OK. Chiron's struggle to figure out who he is represents a departure from much of what we've been taught that being a man requires. But it gives us permission — instructs us, even — to make that choice for ourselves and forge our own identities despite gender norms, just as Juan does for young Chiron early in the film.

"At some point, you got to decide for yourself who you're going to be," he tells the boy. "Can't nobody do that for you."

The Birth of a Nation and Moonlight both give audiences a glimpse at what black manhood looks like when it does not exist to serve whiteness. As black Americans imagine and develop new ways to navigate the standards white society has hung around their necks, the roadmap provided by art such as these films remains a vital tool.

We find ourselves at a moment when the range of accepted gender identities — and performances of those identities — is broader than perhaps ever before. Intersectional race politics find itself at the fore of many national conversations. In the world of cinema, tense debate has arisen around representation, and the rarity of black writers, directors and actors in the industry.

But where Nate Parker's film valorizes a performance of black masculinity rooted in retrograde standards of manhood — an overall reification of how white people taught black men who and what they had to be — Jenkins' charts a path that more closely mirrors reality, while still managing to be the more imaginative film. Moonlight is at the vanguard of our culture. The Birth of a Nation is somewhere behind, fighting to catch up.