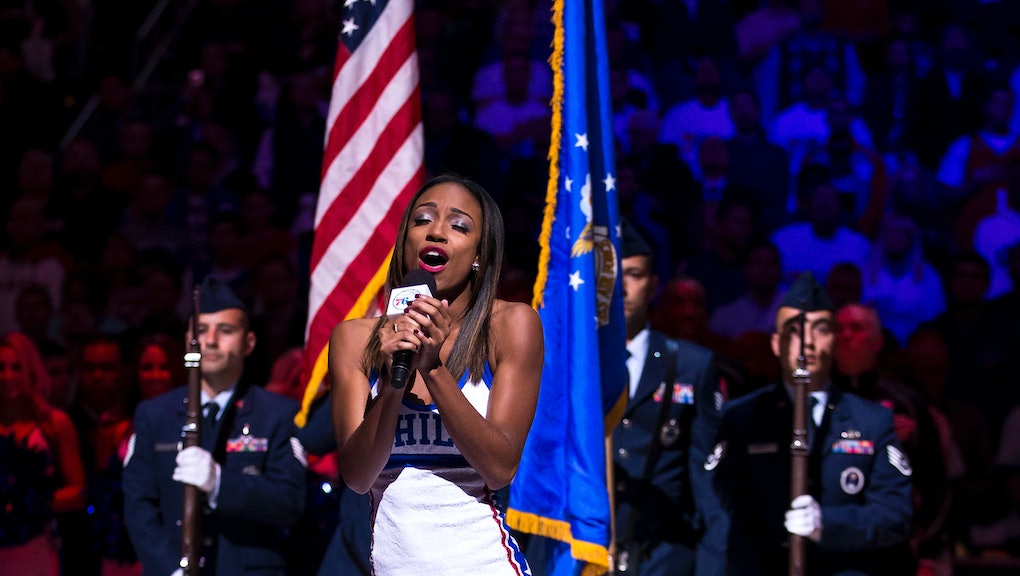 The Philadelphia 76ers issued an apology Friday to singer-songwriter Sevyn Streeter for prohibiting her from singing the national anthem at the NBA team's season opener because she wore a shirt that read "We Matter."

"We are sorry that this happened," the statement read. "After receiving feedback from our players, basketball operations staff and ownership group, we believe that the wrong decision was made, and Sevyn should have been welcome to sing. We apologize to her."

"The Philadelphia 76ers organization encourages meaningful actions to drive social change," the statement reads. "We use our games to bring people together, to build trust and to strengthen our communities. As we move from symbolic gestures to action, we will continue to leverage our platform to positively impact our community."

The incident in question began Wednesday when Streeter — wearing the "We Matter" jersey — posted a video on Twitter telling her fans the 76ers wouldn't let her perform the national anthem.

"I'm at the 76ers game to sing the national anthem and the organization is telling me that I can't because I am wearing a 'We Matter' jersey," Streeter said in the video.

After being pulled from the bill, Streeter told the Associated Press she was "angry and disappointed" over their decision.

"I was extremely, extremely angry, and disappointed and honestly brought to tears by all of it," Streeter told AP. "It broke my heart."

Streeter, who's penned songs for Ariana Grande and Alicia Keys, said she wore the shirt because she feels it is necessary to use her platform to raise social awareness on the issue of the use police brutality against black men and women.

"I also felt it was important to express the ongoing challenges and ongoing injustice we face as a black community within the United States of America — that's very important to me," Streeter told AP.

"Yes, we live in the greatest country in the world but there are issues that we cannot ignore. This can't be ignored."

In an effort to make amends, the Sixers also offered Streeter to perform the national anthem at any game of her choosing. Streeter has not responded to the apology yet. She also did not respond to a request for comment from Mic.

Her actions sparked a mild stir of controversy, which led the Miami Heat to clarify it was "unaware" of her plans ahead of time. In an op-ed for SB Nation, Lawrence wrote she was protesting systematic violence and institutional racism with her kneeling performance, citing San Francisco quarterback Colin Kaepernick as her inspiration.

"For weeks, I went back and forth deciding between kneeling or raising a black power fist," Lawrence wrote. "But kneeling was more significant. Colin Kapernick's original stance played a large part in my decision, but it was also my spirituality — I kneel to show reverence when I pray. But I knew, regardless, I'd be wearing a Black Lives Matter shirt."