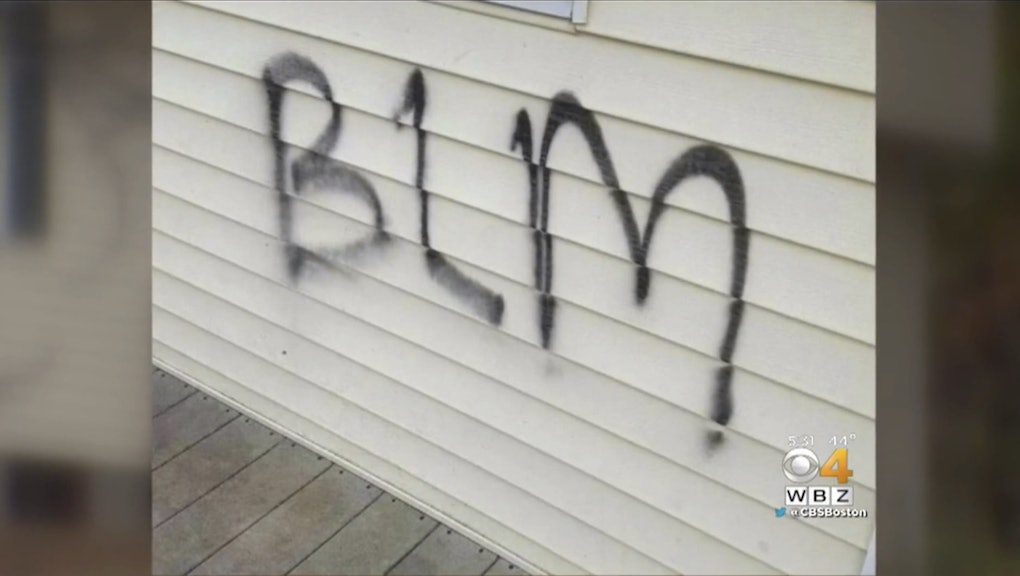 The wife of a Millbury, Massachusetts, police officer is scheduled to appear in court after it was discovered she staged a robbery and vandalism of her home that she had blamed on Black Lives Matter activists.

According to WBZ, Maria Daly reported a burglary of her home on Oct. 17. When police arrived, they discovered the outside of the house had been tagged with the letters "BLM" — an acronym synonymous with the social justice group.

But from the beginning, according to Millbury Police Chief Donald Desorcy, "something wasn't quite right."

"The officers did their due diligence and followed through with the investigation that we had," Desorcy told WBZ. "Basically we came to the conclusion that it was all fabricated. There was no intruder, there was no burglary."

Daly, the wife of Millbury Police Officer Daniel Daly, was committed to her story. On the day of the "burglary," she expressed on social media the shock and sadness of her family ostensibly being targeted by Black Lives Matter.

"We woke up to not only our house being robbed while we were sleeping but to see this hatred for no reason," she wrote in a now-deleted Facebook post obtained by WBZ accompanied by the graffiti on the outside of her house. "This is what we have to deal with these days and it makes me sick."

As word of the incident traveled around town, neighbors wondered how Daly, who is now facing charges of filing a false police report and misleading a police investigation, thought she would get away with the scam as the wife of a police officer.

"She must have tagged the place herself," one neighbor, Gusti Sauber, told WBZ. "I don't know why you'd do that, if you're gonna stage a robbery, I mean really come on, you're a cop's wife. You should know better."