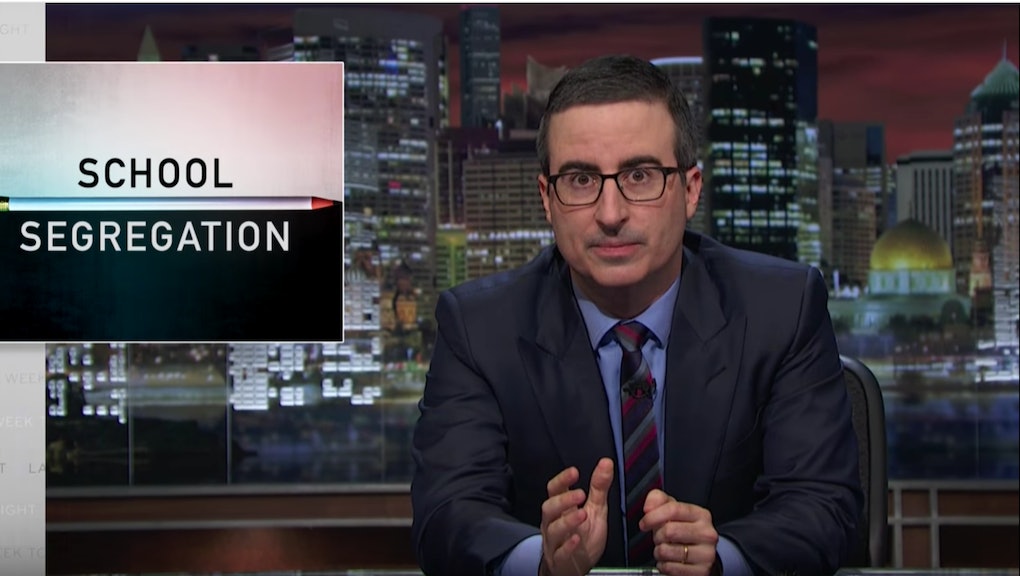 John Oliver devoted his main segment on Sunday's Last Week Tonight to school segregation — which, considering American history, you might surmise would be most prevalent in the South. But as it turns out, that's the region of the United States that happens to be the most integrated in its schools.

"Now at this point, if you are in a city like New York, you're probably thinking, 'Oh, splendid, I know where this is going: a story vilifying the backwards and racist American South, let me just grab a handful of kale chips that I can munch on while feeling superior,'" Oliver says. "Well, hold on. There is probably something you should know."

As Oliver explains, racial imbalance in schools has been a prevailing issue across the country, despite the Civil Rights Act of 1964 that is supposed to do away with institutions that are mandatorily segregated. In its place, per Oliver, schools have "never really bothered integrating in the first place," and this includes liberal areas like New York City.

"Of course racism exists in New York," he says. "Have you never seen West Side Story?"

Plus, when schools are desegregated, Oliver points to a study from University of California, Berkeley professor Rucker C. Johnson that notes that the effect is positive on black and Latino students, with no adverse affects for white students. Essentially, it's a win-win.

"While yes, you can absolutely teach kids about racism in the abstract, if your school is overwhelmingly white, important nuances can get lost," Oliver adds.

Oliver cites an example of a white second-grader who wanted to dress up as Martin Luther King Jr. for a school project focusing on historical figures. But the well-intentioned kid was in blackface — and obviously, he didn't understand why it was problematic. And that's the point.

"The benefits of truly diverse schools are obvious," Oliver concludes. "The problem is often just our willingness to do it at all."