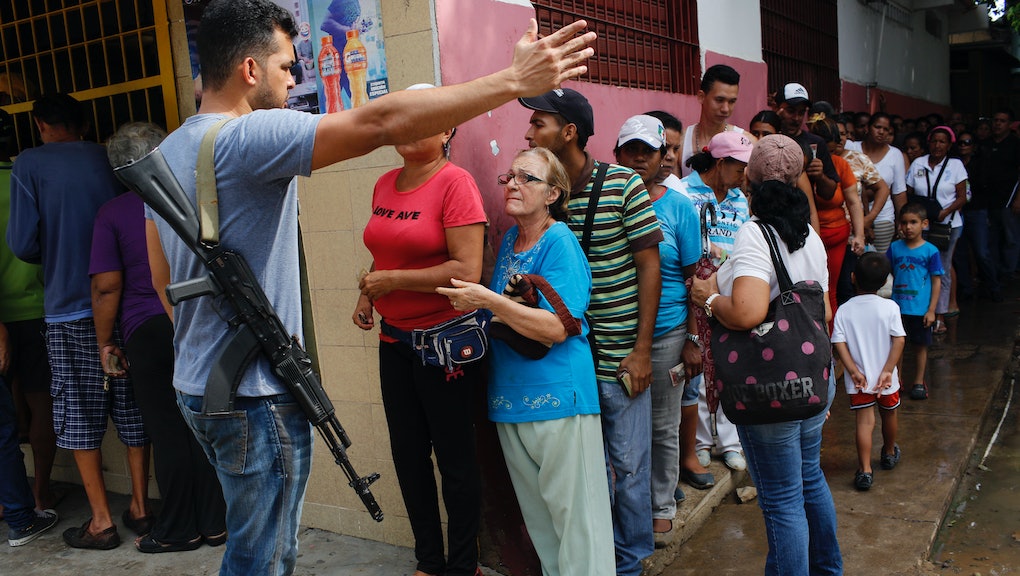 In Venezuela's "food apartheid," if you don't support the regime — you starve

The current "food apartheid" in Venezuela means that if you don't support the president, you won't be getting any help from the government. Food is in short supply in Venezuela, where falling oil prices and inflation have caused an unstable state.

But reports from the country, which has a population of over 30 million, reveal that the government is selectively handing out subsidized food.

Since April 2016, a system called "CLAPs" (Local Committees of Supply and Production) has been going to homes in Venezuela's poorest neighborhoods peddling subsidized groceries, the Washington Post reported.

"I was told very clearly and straight to my face: We won't sell you the bag of food, this benefit is reserved only for chavistas," Carmen Villegas, a resident of Caita, a struggling neighborhood, told the Washington Post. "Chavistas" are people who support former president Hugo Chavez' socialist policies that are being carried out by President Nicolas Maduro. The socialist-affiliated organizations managing the CLAPs program are community groups that don't have much oversight and can do what they want, journalist Edgar Lopez told the Washington Post.

"Given the way that the country is courtly falling apart, [President Maduro] is using this as a way to shut up his opponents by starving them," Monica Baumgarten de Bolle, senior fellow focusing on Latin America at Peterson Institute for International Economics, said in an interview.

What is food apartheid?

PROVERA (aka Venezuelan-Action in Human Rights Education Program), a human rights watchdog group, has called the crisis a "food apartheid," Financial Times reported. This term refers to a situation characterized by food disparity, when a small number of people determines the quality or quantity of food that the general population can access. It occurs when communities of any race are "geographically and economically isolated from healthy food options," the Atlanta Black Star reported. In the U.S., food apartheid exists in so-called "food deserts" or any place where people cannot access or afford nourishing meals.

De Bolle explained that the concepts of supply and demand are nonexistent in Venezuela. "If you use what's happening with the exchange rate, there's no way that an average family of any income bracket can keep up its demand for basic items," she said, estimating that prices are inflating 100% on a month-to-month basis. Former president Hugo Chavez began controlling Venezuelan currency in 2003, and De Bolle notes that the black market exchange rate has devalued roughly 100% each month recently.

A food lifeline for select citizens

Venezuelans can purchase food from government-owned stores that have extremely long lines, private grocery stores with high prices or the black market, CNN reported in August. Basics like powdered milk and a box of pasta sold on the black market might set a Venezuelan back the equivalent of $703 and $301 respectively, according to exchange rates of 10 bolivars to the U.S. dollar, Mic previously reported. The Financial Times noted that the exchange rate was as high as 2,000 bolivars to the U.S. dollar in November and the Washington Post noted that it could be as high as 4,000 to 1 right now.

While most residents wait for hours in supermarket lines, government subsidized groceries are providing much needed aid to some residents.

"The CLAP bags are just enough for a few days, but at least I know that every two weeks or so I will receive my bag and won't be wasting entire days rummaging for stuff," Josefina Leonett, a Venezuelan citizen, told the Financial Times. It's unclear how many people are benefitting from these groceries.

De Bolle noted that it's hard to have a handle on how terrible the situation is or know data on how many people are food insecure.

While other countries like Brazil, Argentina and Uruguay experienced inflation that led to smaller food supply and public outcry in the 1980s, the Venezuelan food crisis is on a much more massive scale, De Bolle said, noting she's never heard of any other Latin American country selectively giving food handouts to citizens in this way.

She explained that residents are bartering on the black market instead of using cash at this point, explaining Venezuela is like a country that just had a war. "They're basically in a situation where the government calls the shots," De Bolle said, explaining Maduro has denied assistance from surrounding countries and NGOs like Oxfam. U.S. Secretary of State John Kerry met with President Maduro in September and many countries including Chile, Argentina and Colombia wanted to send drugs and food, the New York Times reported.

And while countries in the region have offered help, Maduro has refused because he thinks accepting help puts him in a weaker position, De Bolle said.

Yet his policies are leaving citizens weaker than ever. Lack of food will strip Venezuelans of their motivation for change. "The population is in no condition to fight this government anymore," De Bolle said.