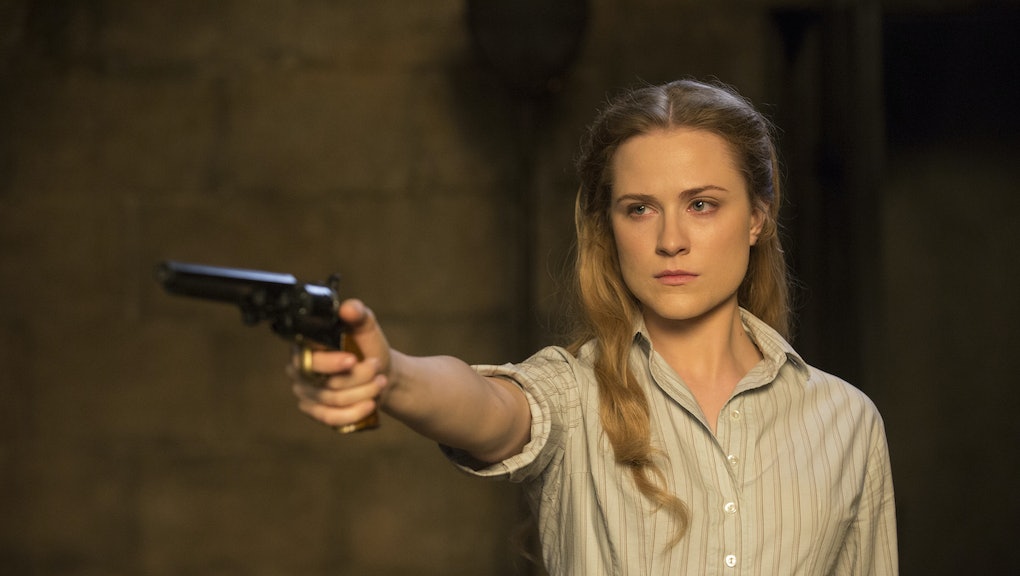 While Game of Thrones and Westworld don't have too much in common on the surface, aside from immense popularity on HBO, both fanbases share a fervid appetite for fan theories. With Game of Thrones it makes a lot of sense: We're several seasons into the show, and there's an entire series of books that can ostensibly support some of the audacious claims from fans.

But after just five episodes of Westworld — loosely based on a 1973 film from Michael Crichton — fans have already dived into a Lost-like level of intrigue, for better or worse. These theories range from multiple timelines within the narrative to the notion that Westworld doesn't take place on Earth, and the weirdest part is nothing feels off-base (yet).

Here are four of the most wild-but-probable Westworld theories provided by fans and critics alike.

Westworld is playing with multiple timelines. Initially, Vulture posited that the friendly and unassuming William was actually the mysterious Man in Black during his first visit to the park. That theory has since lost a lot of steam — though it's still a possibility — but fans were still onto something. It's possible we are looking at multiple timelines on the show.

Some eagle-eyed viewers have pointed to the fact that the theme park's logo is different when William and his lecherous soon-to-be brother-in-law Logan enter the park, as opposed to what we see from inside the park's headquarters. The show's fifth episode, "Contrapasso," added more fuel to the fire by having the robotic Host Lawrence appear as the leader of a band of rebels in the same episode that he was held prisoner, and eventually murdered, by the Man in Black.

From what we can gather from the park, if a Host dies, they won't be rebooted until the following day. By that logic, something is afoot that strongly suggests multiple timelines. But whether that rings true — and what the real purpose is for throwing out different time periods — remains to be seen.

Is there more than one Dolores in Westworld? Bernard continues to have secret conversations with Dolores in Delos's headquarters, which are only helping her question her reality. But how is Dolores actually getting there?

While the headquarters are within the confines of the park, Dolores is intermittently shifted between talks with Bernard, living out her daily loop and being recommissioned and fixed after any potential deaths. She's all over the place — and it could be because there is more than one Dolores on the show.

As HitFix's Donna Dickens explains, Dolores could have two bodies with the same consciousness, meaning we can see one Dolores interact with everyone in the park. Meanwhile, another Dolores — perhaps tucked away in Delos's cold storage facility for old, faulty Hosts — is talking with Bernard. Dolores had a similarly trippy moment when she passed out during a Day of the Dead-esque parade in Westworld during "Contrapasso," waking up to a discussion with Ford about whether she's holding any secrets.

Maybe there's another secret for Dolores to figure out: Her consciousness is traversing multiple bodies.

At least one human is a robot. Probably Bernard. It would be surprising, and disappointing, if all the humans in Westworld were actually human beings. A show featuring extremely realistic artificial intelligence feels destined to reveal that at least one of its characters isn't what they appear. After five episodes, our money's on Bernard.

The way in which Ford, in particular, treats Bernard is less like a peer and more of a subordinate he can bark orders to. This could simply be the case of Ford — the creator of Westworld — eschewing politeness for an authoritative approach. But it could be something more.

As Uproxx detailed extensively, the Hosts are given narratives to keep themselves grounded in their inane purpose, which is mostly to cater to the vices of the guests. Similarly, the way in which Ford refers to Bernard's family — his son tragically dying in some unforeseen circumstance — is suddenly incorporated into Bernard's conversations with Dolores. Before that, we had no inkling of any tragic backstory with Bernard (or any of the human characters, for that matter).

It's a callous reminder of a tragedy, yes, but it occurs within the same episode in which Ford uses a similar technique to Teddy to get the Host prepared for a new park narrative. Considering the vast technology at Delos's disposal for creating Westworld, having a faux-wife speaking with Bernard through futuristic Skype could easily just be a program running through a computer.

Bernard could be a lot of things: a complex Host, a human with robotic qualities or the Host embodiment of the park's co-creator, Arnold. But there's something about him that's suspect.

Westworld is out of this world — literally. It's safe to assume Westworld is a big park, given that the Man in Black has visited for 30 years and is just beginning to learn about the game within the game. The map of Westworld, as provided on HBO, is gigantic. A natural extension of this is to wonder: Where on (literal) Earth can the park exist?

Well, maybe it's not on Earth at all. HitFix's Dickens was the chief theorist for this concept, which suggests that Westworld could exist on another planet — quite possibly Mars. The Delos headquarters is probably the biggest tell. Employees can only speak with loved ones in a special communications room, and all the employees work at the park in stationed shifts, as evidenced by one worker asking another, "When do you get to rotate home again?"

Another important clue came from an Entertainment Weekly interview with Westworld's co-creators, Jonathan Nolan and Lisa Joy. When Entertainment Weekly reporter James Hibberd begins to ask a question about the possibility of Westworld not taking place on Earth, he notes that the showrunners "laugh heartily, and I'm dying to know why." So are we, but we have a good idea of what the show will ultimately reveal: Westworld is, quite literally, out of this world.