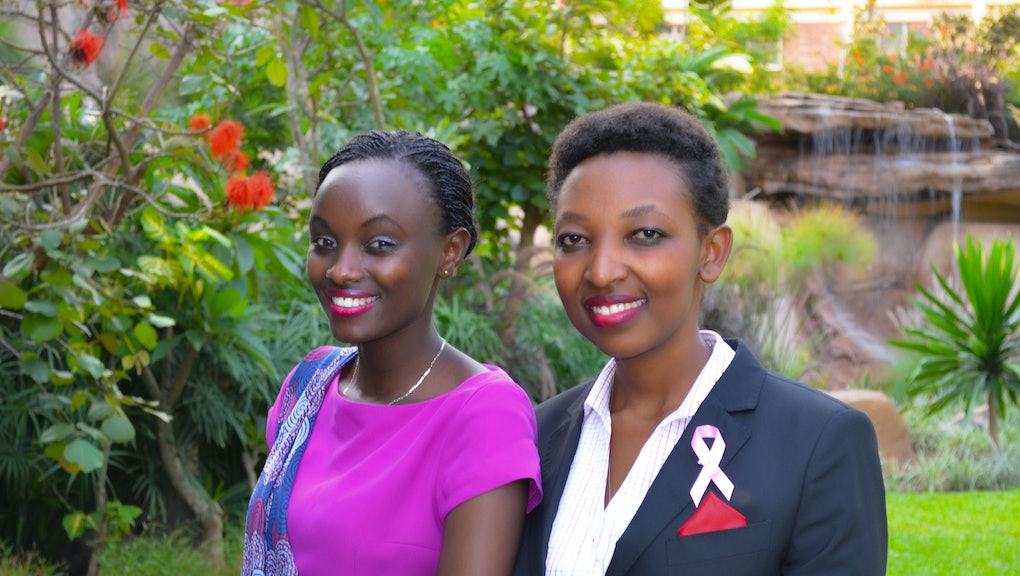 Rwanda reborn, brought to you by women

Ask Aline Kabanda the key to Rwanda's future success, and she will tell you: educating and empowering women.

"I like to quote Nelson Mandela, who said, 'Education is the most powerful weapon which you can use to change the world,'" said Kabanda, country director for the Akilah Institute for Women, a college based in the Rwandan capital, Kigali. "I believe education gives women the tools for success."

According to the Global Gender Gap Report, Rwanda ranks seventh among nations in closing gender gaps, with about 7% of Rwandan women currently in tertiary school, compared to 9% of men. Women make up 64% of the parliament and are 81% of the agricultural workforce, but according to Rwanda's National Gender Policy Report, the majority of women employed in rural areas are still making the transition from unskilled labor, trade and crafts into more skilled positions. In urban areas, 53.5% of women are employed, many in "support staff" jobs.

The Akilah Institute is a pivotal driver of women's employment in Rwanda, offering diplomas in information systems, entrepreneurship and hospitality management. Working with employers in the hospitality industry, including Marriott International, the Akilah Institute is helping to empower Rwandan women and build a future generation of the country's female leaders and professionals.

Rwanda is "the land of a thousand hills" and home to a third of the world's remaining mountain gorillas. But for many outside of Africa, Rwanda still conjures the traumatic events of 1994, when close to one million people died in a 100-day paroxysm of ethnic violence.

The genocide left some 50,000 women widowed and a country in crisis. According to the SURF Survivors Fund, there are 10 times more widows in Rwanda than widowers. Another two million Rwandans were displaced. Many children lost one or both parents to the violence, and many women were left to raise their sons and daughters alone.

As Rwandan women increasingly assumed the role of primary caregiver, joining the workforce as educators and government employees, they have played an integral part in rebuilding Rwanda into the peaceful country it is today. Women in Rwanda play an important role in helping to give back financially to their community. On average, women generally reinvest 90% of their earnings back into their families, compared with men, who contribute back 30-40% of their paycheck — further evidence of the potential impact of educating women.

Now, the young children, particularly the girls, who grew up after the genocide, are entering the workforce, representing a new generation of entrepreneurs, business owners and professionals helping to lead Rwanda's growth as the country opens up to foreign and regional investment.

Tourism was, and still is, a leading sector in Rwanda's economy. In the last year alone, three new international hotels have opened in Kigali (including, most recently, the Kigali Marriott Hotel), providing local jobs and revenue from taxes. In addition, the companies provide high-level training, giving young women marketable skills they can take anywhere.

Hospitality is an ideal industry for young women in Rwanda to pursue, according to Allen Kazarwa, 25, who graduated from the Akilah Institute in 2012 and now works as a human resources officer at the Kigali Marriott.

"Hospitality didn't come from nowhere," Kazarwa said in a Skype interview. "It came from our heritage and our ancestors." Akilah built on the tradition, she added, and provided "a chance to go out there and practice."

The Rwandan government has also spearheaded new development projects to bring regional and foreign investment back into the country, including the construction of the new Kigali Conference Centre, which hosted the World Economic Forum in May and the 27th African Union Summit in July. In just a short time, Kigali has emerged as a major African destination for international meetings, conferences and regional events — and the Akilah Institute has seized on the opportunities this growth offers to women.

On a practical level, Akilah addresses the main barrier to women's education — the cost — by giving students the option to pay back the majority of their tuition after they start earning an income. Some 90% of their students find a job within six months of graduation.

Akilah's students have found employment at Marriott International Inc., which partnered with the school early on. On Aug. 17, 2012, Marriott recruited 15 local students with diplomas in hospitality from the first graduating class of Akilah Institute. Those women went on to join the Marriott global team and enrolled in training programs in Dubai and Doha, some staying for as long as four years before returning to the Kigali property, where they now work. Since then, dozens of other Akilah graduates have joined the Kigali Marriott, which has created over 500 new positions.

Lydia Uwimbabazi, 23, is one of the recent Akilah graduates who was snapped up by the Kigali Marriott Hotel. Although her parents initially resisted when she expressed a desire to attend Akilah Institute in 2013, Uwimbabazi persisted. "I had to make my own decision," she said in a Skype interview.

Since she graduated, however, her parents have come around. "They have seen some benefits from Akilah because I have started being more responsible," Uwimbabazi said. In addition to paying for her younger brother's school fees, she is now "able to give my parents money for the maid or take them to the hospital when they are sick."

Akilah graduates also work at Azizi Life, a company where the majority of the employees are women, that works to support and promote local Rwandan artisans and specializes in décor, baskets, jewelry and accessories. Their head office is in Muhanga, about an hour south of Kigali, and they have a boutique in Kigali where they sell their products, mainly to tourists and expatriates. In total, Azizi Life works with around 400 artisans — 80% are women — most living in the south of Rwanda, all from rural communities.

"We found that recruitment in Rwanda can be hard — you get so many applicants to every single job, and it's a lot of work to go through the process of hiring," said founder Tom MacGregor, who has hired Akilah graduates to manage the boutique, as well as the company's social media marketing. "With Akilah, we know that their students and graduates have a high level of training in areas like customer service, which is very important to us. Through Akilah, it is easier for us to find someone that fits our culture."

With leadership training in community relations and public speaking, the Akilah Institute is helping to build a rising generation of empowered Rwandan women. Learning to speak publicly was especially transformative for Uwimbabazi. It gave her the confidence to assert herself in a traditionally male-dominated society. "As a lady, I wasn't supposed to look into a gentleman's eye when I was talking," she recalled. "Especially in our culture, it is something that is now changing."

More than two decades out from a traumatic past, women like Uwimbabazi are leading Rwanda into a peaceful and prosperous future.

"It is the love for our country that everyone puts in the energy into building our country," Uwimbabazi said. "No one else can build our country except us."