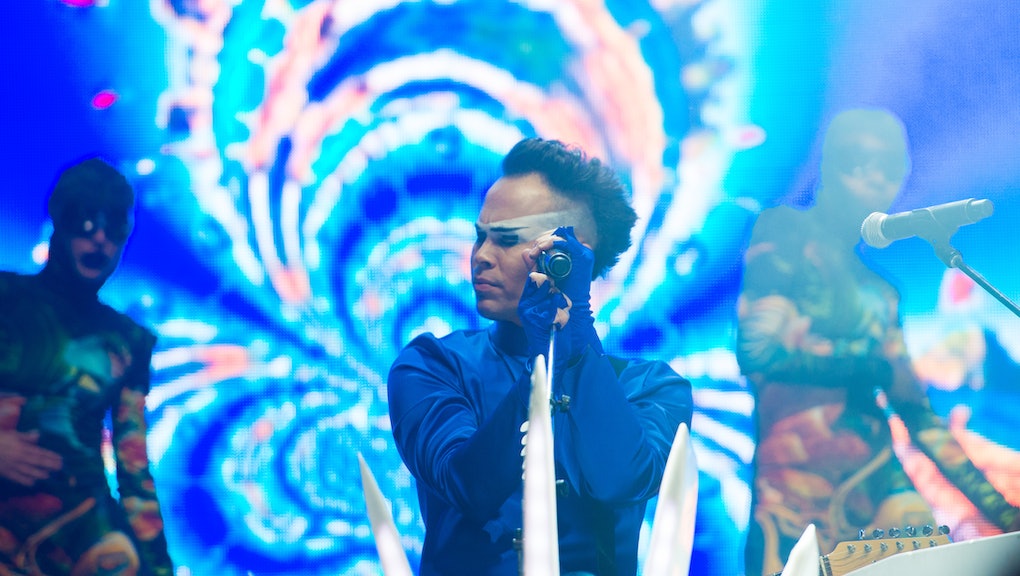 Empire of the Sun 'Two Vines' Review: The band trades urgency for weak synths and cheese

In "Two Vines," the namesake song of Australian synth-pop duo Empire of the Sun's third studio album, frontman Luke Steele exclaims: "Right in the prime of your life/ Struck by the force of us."

Unfortunately, for the new LP, describing the band's music as a "force" may be an overstatement. Although classically Empire of the Sun in its lushness, Two Vines is a collection of 11 indiscriminate songs that could very well be one long stream of empty lyrics endlessly recombining over tedious synth lines. It feels a contradiction in terms that the album can feel so tedious and still leave the listener wanting more.

The theatricality and ingenuity that made the band so magnetic in the first place, to such a degree that few other bands have been able to match since, just has to be around the next bend, the next song — but it never arrives.

It's hard to imagine the band, with their fantastical and surreal galactic outfits and visuals, performing anything off Two Vines with the same energy of 2013's Ice on the Dune or 2009's Walking on a Dream. While bands should always be looking for opportunities to re-conceptualize their sound, if you drain something vital from the work, you have to add something equally compelling in its place. Empire of the Sun doesn't do so on Two Vines.

The group seems to lean nostalgically on their typically infectious dance sound, but deny themselves the opportunity to fully indulge. The lead single, "High and Low," comes closest to recapturing their magic. In it, Steele cleverly sings, "Alice D. is on her way home/ She's been out all night again/ She don't want nobody's help now/ She sees stars and rocket ships," reminding fans of the band's trademark goofy psychedelia. But even then, it's still not as otherworldly as "We Are the People," the beloved second single off their debut.

Perhaps Hawaii is to blame for the lazy droning of Two Vines. The band, comprising of Steele and Nick Littlemore, were so inspired while on vacationing at the Pacific paradise that they recorded the album then and there. The tropical vibes appear expressed throughout the album, from the green flora on the cover to the extreme mellowness and lack of consequence in the majority of the songs.

In an October interview with Billboard, Steele explains that the new album is "about that unexplainable feeling of waking up on a long beach and the sun's rising," along with hearing the birds converse and dolphins swim. But that picture of vibrancy and bliss he describes never arrives. Their song "Before" is definitely summery, but in the way that season can sometimes feel maddeningly monotone and predictable: "Come wash the clouds away," he sings in one of the album's flattest lyrics. "Can't wait for summer."

That's not to say that Empire of the Sun shouldn't do mellow at all. The love song "To Her Door" is beautiful and dreamy enough to make you feel like you could be relaxing on some beautiful untainted beach with your loved one. But when so many other songs (like "First Crush") sound so eerily similar, longtime listeners will likely be left craving the unpredictability of their past works.

But then again, as Steele continues on "To Her Door," "I know it's simple but I don't care." Maybe that's the only way to enjoy the album — to simply stop caring about what their music has become and accept that all empires falter at some point.