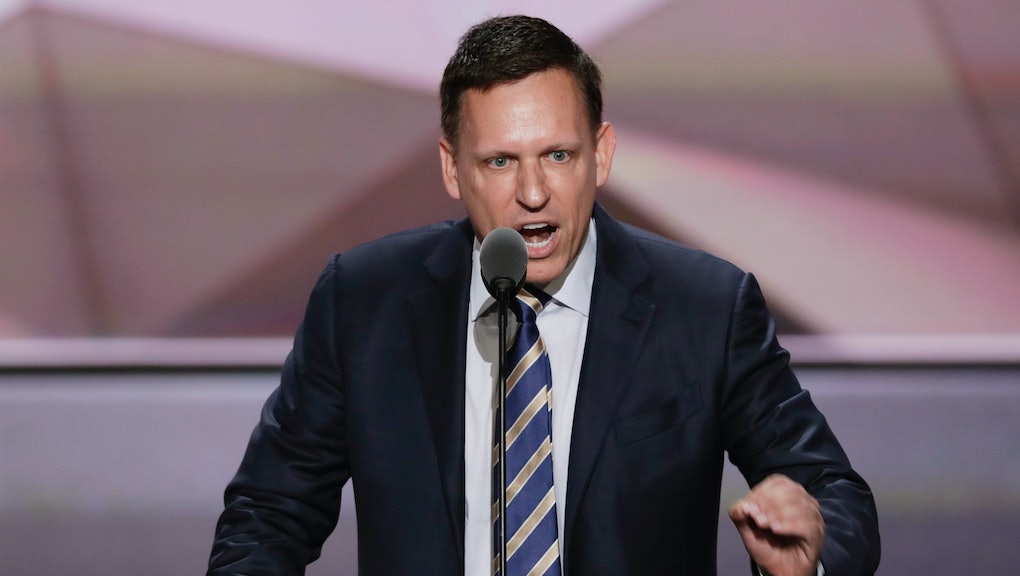 On Monday, Peter Thiel, the tech billionaire and Facebook board member who funded a lawsuit to bankrupt the news site Gawker, gave a 15-minute speech at the National Press Club. Thiel, who has pledged $1.25 million to Donald Trump's presidential campaign, defended his endorsement. He also defended Trump himself, arguing that while he's said some gross stuff about women, he gets the "big things" right.

For the most part, Thiel's speech was just, well, boring. He recycled old Trump talking points and went off topic to avoid answering questions about Trump's policies. He seems to sincerely believe Trump is America's great hope, our chance to make America "normal," whatever that means.

But Thiel's speech had one particularly hypocritical point that deserves closer inspection: his focus on accountability. National Press Club president Thomas Burr asked if Thiel's company had suffered any blowback because of his support for Trump. Thiel answered, "I'm not Trump. The founders of the companies I invest in are not me. Their employees are not the founders. ... If you hold people responsible for people who are two degrees or three degrees of separation, that way lies insanity."

Interesting argument. Who has notoriously attacked an opponent by targeting people two degrees of separation away? Donald Trump, Thiel's candidate.

One of Trump's common tactics in his campaign against Hillary Clinton is going after people outside of Clinton's immediate sphere in an effort to discredit her. Case in point: Trump's obsession with top Clinton aide Huma Abedin's separation from Anthony Weiner.

"If you hold people responsible for people who are two degrees or three degrees of separation, that way lies insanity," Thiel said.

"I only worry for the country in that Hillary Clinton was careless and negligent in allowing Weiner to have such close proximity to highly classified information," Trump said, as reported by Salon. "Who knows what he learned and who he told? It's just another example of Hillary Clinton's bad judgment. It is possible that our country and its security have been greatly compromised by this."

During the first presidential debate, Clinton told Machado's story: that Trump had made fun of her for gaining weight. "This is somebody who likes to eat," Trump is heard saying about Machado in a video, who was 19 at the time of recording. Trump responded by launching a series of tweets aimed at Machado, calling her a "con," "the worst" and "disgusting," and inciting his followers to "check out sex tape."

If Thiel believes his own words, he ought to believe Trump's strategy of attacking people two or three degrees of separation from Clinton, like Weiner, Abedin and Machado, is "insanity" too.