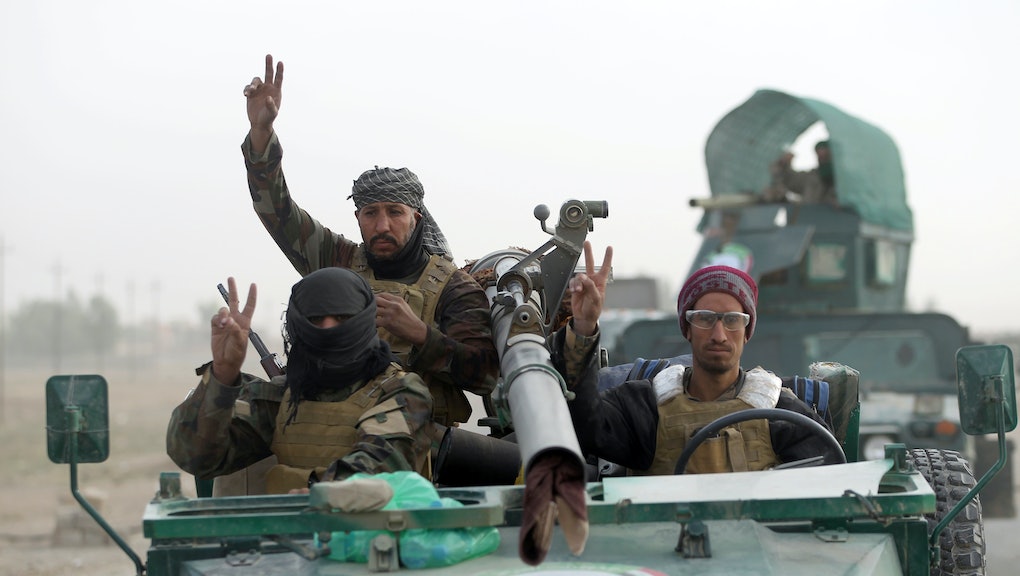 Is ISIS losing? Mosul is under siege as coalition forces move in for the kill

The U.S.-led international coalition against ISIS, the infamous terror organization which rules large swathes of Syria and is struggling to hold its territories in neighboring Iraq, is closing in on the ISIS' last major stronghold in the latter nation: Mosul.

On Monday, CNN reported Iraqi counter-terrorism chief General Talib Shegati said special operations teams were within a few hundred meters of the city center and coalition forces would begin the main assault not in a "matter of days but matter of hours." If coalition troops are able to drive ISIS out of Mosul, the self-declared caliphate will lose its capital in Iraq.

Why the worst may be yet to come

When coalition forces enter Mosul, they will likely encounter stiff resistance from ISIS fighters, who have shown pittances or worse regard for collateral damage or civilian casualties. According to CNN, members of the group have taken thousands of Iraqis living in the city to serve as human shields, and Mosul and the surrounding countryside are almost certainly covered with mines and IEDs.

ISIS has extensive tunnel networks in the city, lit large chemical fires at industrial and energy facilities and is regularly conducting suicide attacks, CNN reported. Its fighters are also indiscriminately executing real or suspected enemies in the civilian population.

As Al-Jazeera's Tallha Abdulrazaq wrote earlier this month, prior battles to take cities such as Tikrit, Fallujah and Ramadi all took significantly longer than projected, and ISIS has been in "unrelatively unmolested" control of Mosul for more than two years — ample time to fortify and booby-trap large stretches of the city. Nor have the Iraqi Security Forces and their allies, Kurdish Peshmerga and Shia militias, had a promising battlefield record. Despite billions of dollars in U.S. funding and outnumbering ISIS forces on paper by a huge margin, political problems have resulted in poor training, tactical skills and logistics capabilities.

Finally, air strikes in Iraq and Syria from the U.S.-led coalition had likely killed 1,500 or more civilians as of August 2016. The intense air campaign over Mosul will almost certainly result in more civilian deaths and injuries.

With up to 1.5 million civilians currently believed to be located in or around the city, these factors could mean the fight to retake Mosul becomes another slow-rolling bloodbath.

Why there's reason to be cautiously optimistic

Mosul is ISIS' last major stronghold in Iraq, meaning the group's fighters operating there will have little choice but to die in the city's defense or fall back into neighboring Syria.

U.S. Army Gen. Joseph Votel told reporters last week up to 900 ISIS fighters had died, and an estimated cadre of 3,000-5,000 was left in the city. While Iraqi forces face many challenges, up to 100,000 ground troops are involved in the operation, meaning they outnumber ISIS defenders by at least 20:1.

In late September, Rudaw reported ISIS' territorial losses had deprived it of all oil production capacity in Iraq. While the report has yet to be completely confirmed, what is clear is that ISIS has at a minimum lost the substantial majority of those facilities and the group is increasingly reliant on other sources of revenue.

Despite the possibility of an ISIS counter-attack on Mosul following the assault or further ethnic and political violence from other factions, NBC News reported Iraqi and Kurdish forces are "working together militarily for the first time since 2003" and "rival Shiite militia leaders, with an eye on the recapture of Mosul, held reconciliation talks last week."

Finally, while the long-term trajectory of foreign intervention in Iraq has been mixed, to say the least (if not outright disastrous), members of the U.S.-led coalition will probably commit substantial resources to ensuring the city remains under Iraqi government control.

But all this progress is tenuous and uneasy.

"If all the people who live there don't feel that the future government represents them, then in a year or two we might see the next iteration of [ISIS] roll in and take over Mosul," Karin von Hippel of London's RUSI defense tank told NBC News.