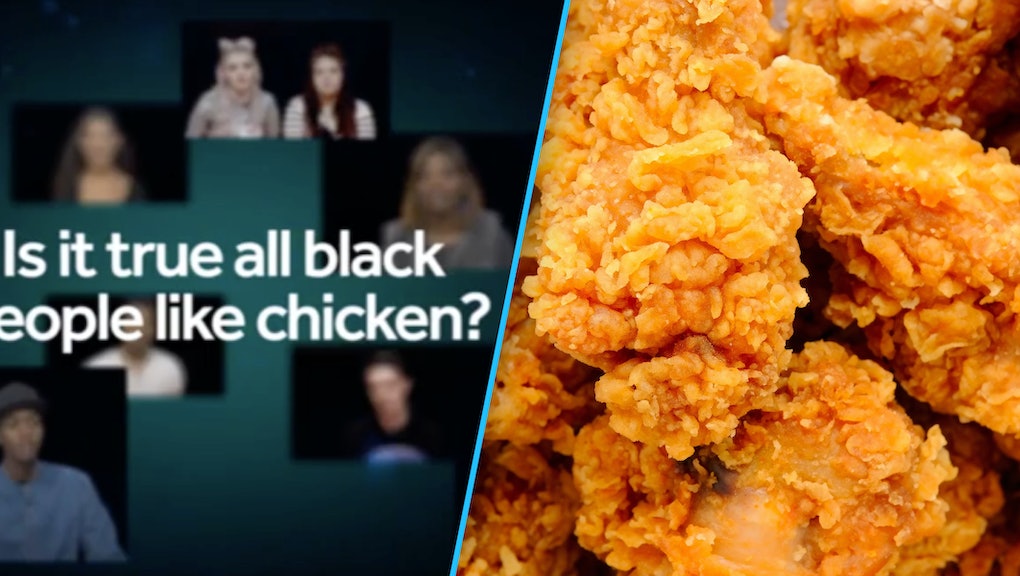 On Monday afternoon, the BBC Newsbeat tweeted and deleted a very awkward tweet that read: "Black people and fried chicken — is there any truth in it?"

At around 1:30 p.m., BBC Newsbeat reposted the video to Twitter with a new caption that read: "We're talking about being black and British http://bbc.in/2e4yf4x & the stereotypes you might face, like this one?"

As October marks the UK's National Black History Month, this could have been an opportunity for the BBC to ask black people how stereotypes are harmful.

In the video, the first scene shows two white young people discussing how there is a "stigma towards black people who want to eat a certain kind of chicken from a certain kind of restaurant." A bizarre sequence shows British people reinforcing stereotypes about black people in the rest of the video. One white person giggles as they say that black women eat fried chicken because it "makes your bum bigger."

So... black women want their butts to look bigger, and they eat a lot of fried chicken to achieve that look? Bravo, two stereotype birds with one stone.

A black man chimes in, "it's not the only food we eat!"

The last person in the video, a white person, says: "There's a stereotype but it's true." Nice food for thought to wrap it all up, huh?

This particular stereotype is deeply ingrained in American history. Fried chicken was a staple food in the south, and the dish was frequently eaten by slaves because it was cheap and a good source of meat, NPR noted, explaining that fried chicken is a "vehicle for racism because of the way people eat it."

"It's a food you eat with your hands, and therefore it's [perceived as] dirty," Claire Schmidt, professor at University of Missouri, told NPR. The fried chicken stereotype has a lot of racist baggage in the U.S. and it's sad to see that these harmful ideas have hopped the pond.

Unfortunately, the black people eating fried chicken trope isn't the only stereotype the Brits picked up from their American peers. Earlier on Monday, BBC Newsbeat also tweeted out a video in which young black and white people discussed how black people either don't or can't swim — a conversation that, again, perpetuates stereotypes instead of breaks them down. A history of segregated pools and beaches in the U.S. meant many black people did not have the opportunity to learn to swim, Take Part noted. Thus, the stereotype dismisses the marginalizing of a group of people and faults the group that was victimized in the first place.

Categorizing individuals based on skin color is patently wrong, and people miss opportunities to learn from one another's differences when they take stereotypes at face value without acknowledging the origins of said stereotypes.

Why is BBC dredging up these topics in the name of Black History Month? These videos don't move the conversation forward when it comes to racism.

"These short films show young people from various backgrounds discussing their experiences of dealing with different stereotypes, which accompanies a wider documentary looking at racism in the UK," a BBC spokesperson said in an email.