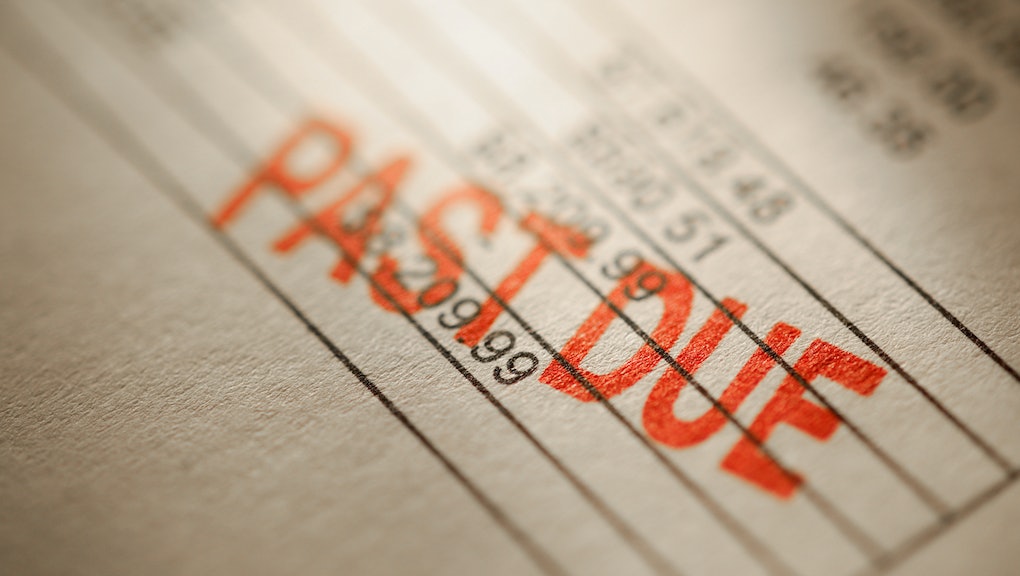 You may have heard a few scary terms thrown around about late student loan payments: There's "delinquency," for example, which is any payment a day or more past due — though late fees typically won't kick in until after about 15 to 30 days.

And then there's default, which happens after nine months of missed payments, means your entire balance comes due, and often puts you on the hook for extra interest and costs.

But less talked about is debt payments that are three months late.

The truth is, it takes less than default to hurt your finances and your credit score: After only 90 days, your debt servicer starts reporting late payments to the three major credit bureaus.

That's scary because 41% of student loan borrowers in the U.S. report they've fallen 90 days or more behind on payments, according to results of an exclusive study conducted for Mic. Personal finance research firm ValuePenguin surveyed 1,000 people selected to reflect the U.S. population per the latest census.

Non-white borrowers in the survey were even more likely to report 90-day-late payments, at a rate of 46%.

That's a huge number of people risking their credit score — which can lead to all sorts of financial consequences, including difficulty obtaining insurance, making utility payments or even finding an apartment or house to rent.

These late payments might also be one reason why 39% of young borrowers say they feel "embarrassed" by their debt, according to the survey — despite the fact that it's incredibly common: One study found that in 2012, more than  70% of graduates from four-year colleges reported having student debt.

Even those who make repayments on time may feel ashamed, ValuePenguin analyst Rebecca Wessell told Mic.

"I think the stigma might be more the amount of debt," she said. "[Borrowers are] going to be paying it off for the rest of their life."

Indeed, widespread student debt may have serious consequences for the Millennial generation.

Not everyone agrees that student debt is preventing young people from hitting adulthood benchmarks like homeownership and having babies — but there is evidence in the survey results that this might be true. ValuePenguin found that nearly half of millennials say they want to buy a home but have put the decision off due to the size of their student loan payments.

And a quarter of millennials surveyed say that their student loans have prompted them to put off having children.

While older generations did sometimes take out education loans, the scale of debt today is unprecedented, Wessell said.

"When you think about Baby Boomers ... if they did take out debt it was a pretty small amount," she said.

There may be some hope on the horizon. Both presidential candidates have proposed expanding student loan forgiveness to make it easier for borrowers to get out of debt — although experts have criticized Trump's plan as too costly and others have said Democratic presidential nominee Hillary Clinton's plan is more robust.

Young respondents in the ValuePenguin survey seemed to agree: More people aged 18 to 34 said they believe Clinton will do more to address the student debt crisis than Republican nominee Donald Trump — by a 20-point margin.