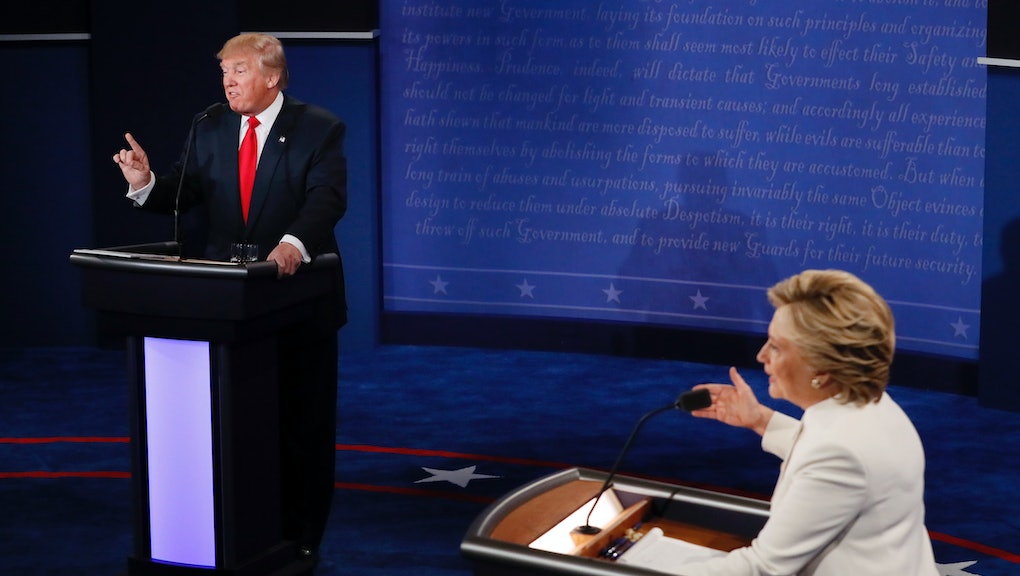 Donald Trump vs. Hillary Clinton: Where the candidates stand with voters right now

It's November 1, and that means the election is a week away. Both Hillary Clinton and Donald Trump incurred October drama — for Clinton, a renewed investigation of her emails, for Trump, leaked tapes of him talking about sexually assaulting women — that shook both candidates' campaigns.

Despite last month's blows to his campaign, Trump has taken the lead over Clinton by a single point in a new ABC/Washington Post tracking poll.

The poll was conducted via cell phones and landlines, bearing results with a three-point sampling margin of error, meaning that one-point lead could be superficial. But it paints a bigger picture of where the candidates stand with voters within days of the election.

Where Hillary Clinton stands with voters

Clinton got a raw deal. On Oct. 28, FBI Director James Comey announced plans to investigate a new set of emails potentially connected to his earlier investigation into Clinton's use of a private email server.

When Comey concluded that initial investigation in July, he declared "no charges are appropriate" in relation to the case — though he did call Clinton's actions "extremely careless." But just the notion of looking back into the emails, a move panned publicly by former federal prosecutors and Department of Justice senior staffers, was plenty of ammunition for the Trump campaign, which used the news to bolster an attack on Clinton's trustworthiness.

Where Donald Trump stands with voters

Trump, on the other hand, was recorded in a hot mic situation making blatantly sexist remarks about women, including, but not limited to, boasting about grabbing them "by the pussy." When confronted, Trump apologized — by dismissing the language as "locker room talk" and trying to shift attention to Bill Clinton's sexual assault accusations.

Somehow, Trump still gained favor. On Oct. 22, his enthusiasm among likely voters was at 49%, according to the ABC/Washington Post tracking poll. On Oct. 30, it rose to 53%.

If this news made you pack up a bug-out bag and look for tickets to Guam, take a breath. In 2004, polls showed Sen. John Kerry beating George W. Bush, who went on to beat Kerry by three points. In 2012, polls showed Mitt Romney with a one-point lead over Barack Obama — and Obama still went on to secure his second term.

If you're a Clinton supporter, these new polls no doubt look scary — but the race is far from over.