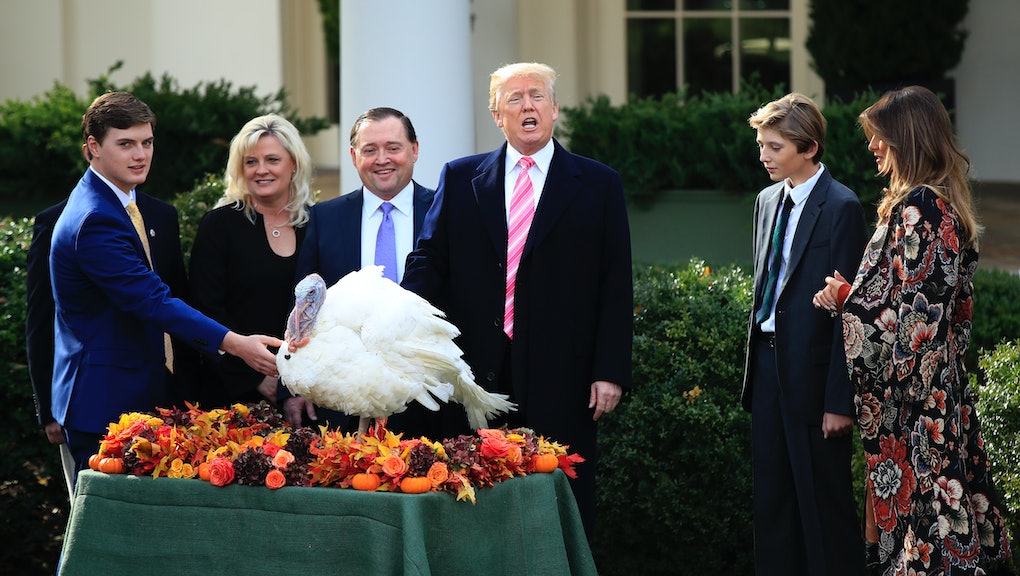 After Trump saved Drumstick, we still have to ask: Why do we pardon a bird every year?

While millions of Americans are picking out their perfect, plastic-wrapped turkeys at supermarkets across the nation, President Trump is protecting one lucky turkey from a roasted fate.

In his first poultry-pardoning act as president, Trump pardoned a turkey named Drumstick. (A turkey named Wishbone, the runner-up in a White House Twitter poll, was not publicly pardoned but will join Drumstick in turkey retirement at Virginia Tech). Trump made several attempts to deliver jokes during the pardoning, including a jab at President Barack Obama, who pardoned two turkeys named Tater and Tot in 2016.

"As many of you know, I have been very active in overturning a number of executive actions by my predecessor. However, I have been informed by the White House counsel office, that Tater and Tot's pardons cannot, under any circumstances, be revoked," Trump said during this year's turkey pardon.

But why does the commander in chief of the United States of America, whose responsibilities most of the year have absolutely nothing to do with farm animals, pardon a turkey before Thanksgiving every year? Though President George Washington officially declared Thanksgiving as a national holiday in 1789, the tradition of pardoning a turkey came decades later.

According to the White House Historical Association, the tradition of pardoning dates back to President Abraham Lincoln's clemency to a turkey, a speech given in 1863. "A live turkey had been brought home for the Christmas dinner, but [Lincoln's son Tad] interceded in behalf of its life. . . . [Tad's] plea was admitted and the turkey's life spared," White House reporter Noah Brooks wrote in an 1865 dispatch recalling the event. Leave it to Honest Abe's son to continue the family legacy.

In the 1870s, Rhode Island poultry farmer Horace Vose, known as "The Poultry King," sent slaughtered and dressed birds to presidents as gifts. Starting with President Ulysses S. Grant, these Vose turkeys, served at both Thanksgiving and Christmas, became a four-decade tradition, though there's no historical evidence that any turkeys were pardoned following the Lincoln era.

When Vose passed away in 1913, the gifting of turkeys became fair game, and "turkey gifts had become established as a national symbol of good cheer," the White House Historical Association wrote.

These gifted turkeys, however, were all dead and ready for roasting, until 1947, when the National Turkey Federation and the Poultry and Egg National Board gifted live turkeys to President Harry Truman. Making a show of it, Truman staged a photo op with his 42-pound Texas tom, in an image that has become iconic with historic presidential pardoning.

The Truman Library, however, notes it has "no documents, speeches, newspaper clippings, photographs, or other contemporary records in our holdings which refer to Truman pardoning a turkey that he received as a gift in 1947, or at any other time during his Presidency." That turkey's fate was to end up on a platter for Christmas dinner.

Several years later, President John F. Kennedy was said to have pardoned a live turkey at a 1963 celebration in which the turkey gifted to him had a sign hung around its neck reading, "Good eating, Mr. President." Nothing like a live turkey to put you off drumsticks! "We'll just let this one grow," Kennedy said of his gifted turkey and the LA Times headlined that event as a "presidential pardon," though it's unclear if the turkey actually survived beyond the holiday season.

During his term, President Richard Nixon chose to send the birds gifted to him to a local petting zoo rather than the White House kitchen, though, that was not deemed a pardon but rather perhaps an avoidance of guilt about eating an animal with which he had become acquainted. This event was not called Turkeygate, but it's never too late to go back and rename historical events.

In a Nov. 23, 1987 informal exchange with reporters, President Ronald Reagan became the first president in office to use the word "pardon," to distract from political conversation, specifically about the Iran-Contra affair. He referred jokingly to Charlie, a turkey gifted to him by The National Turkey Federation that was sent to a petting zoo, at the aptly named Frying Pan Farm in Fairfax, Virginia, and pardoned, the Guardian reported.

It wasn't until November 17, 1989, that the tradition of turkey pardoning as we now know it took place. In his first Thanksgiving in office, President George H. W. Bush officially pardoned a Thanksgiving bird. "Let me assure you, and this fine tom turkey, that he will not end up on anyone's dinner table, not this guy. He's granted a presidential pardon as of right now," Bush told reporters. He also noted that the turkey looked nervous, a comment that his son, George W. Bush would reuse in his own future turkey pardoning, TIME noticed.

Every November since 1989, presidents have continued to pardon American turkeys, though that hasn't stopped them from gobbling down turkey at the White House's annual Thanksgiving dinner. Politics, ey?