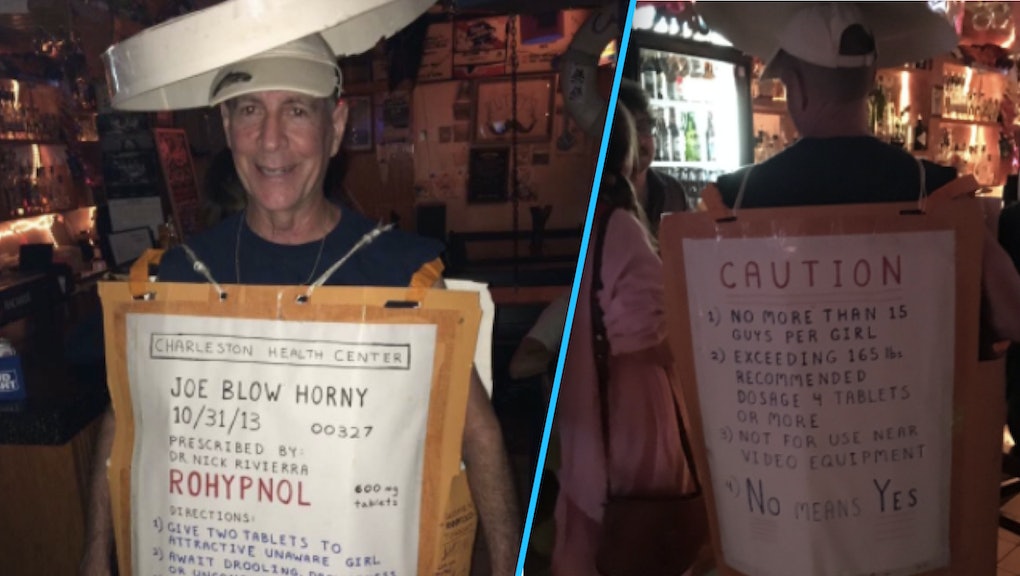 This man dressed as "roofies" for Halloween because — well, we just don't know anymore

Every Halloween, the idiocracy seems to try to outdo itself in a twisted quest to win the yearbook superlative for Most Awful. This year, competition was tight, what with a white college student going as Bill Cosby — blackface and all — and two high school girls going as "rape victims."

But in what could only be construed as a bold attempt to trump them all, this man entered a South Carolina bar Monday night dressed as a bottle of Rohypnol — better known as roofies, a common date rape drug.

SB Nation's Jim Lohmar was the first to spot him, tweeting out photos of the front and back of his costume.

The reverse side comes with some words of caution, which should read "Stay as far away from this man as humanly possible," but instead include rape culture's veritable slogan in bold: "No means yes."

Lohmar told Jezebel the unidentified man hung around the bar for about an hour before people realized he was dressed as a date rape drug. "After seeing it on social media, a group of eight or so women friends entered the bar and confronted him," Lohmar said. "He argued with them for a while before being escorted out. He left without issue and the bar applauded as he did so."

However, when Twitter user Alex McDaniel tweeted at Lohmar asking him to update his followers when the man "inevitably" tells everyone they're being too "uptight" about rape, Lohmar clarified that the man didn't go so quietly.

"He said that a lot as every woman in here told him he was full of shit and then he got walked out," Lohmar replied.

One misogynist down, millions more to go.