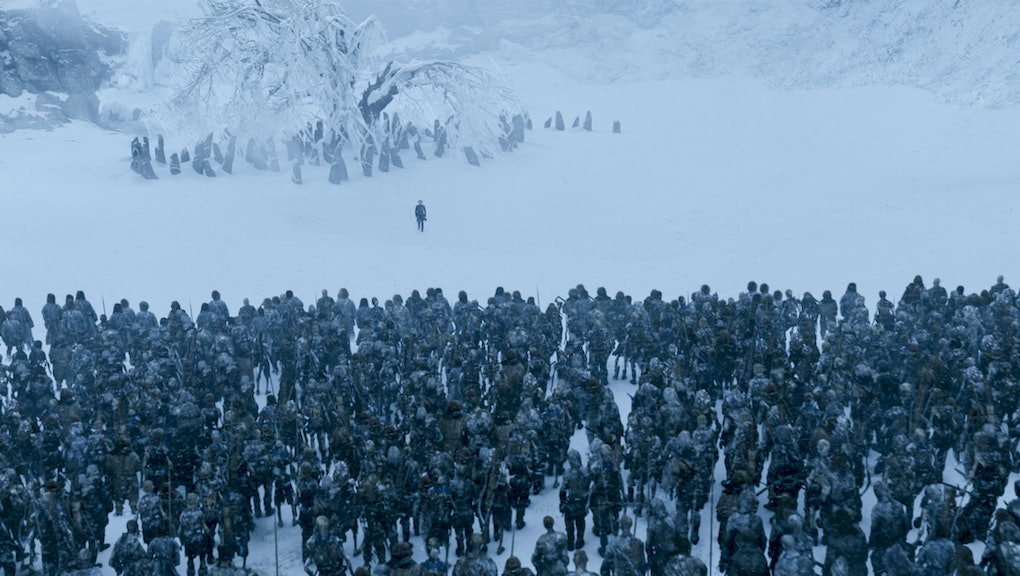 'Game of Thrones' theories: Every one we still want to see come true

In 2017, Game of Thrones will air fewer than 10 episodes in a single season for the first time. And that's not even the most despairing disclosure we've gotten in recent months: There are only two seasons left before we must bid adieu to HBO's Westeros.

This was quite evident in the show's sixth season, as the narrative picked up the pace after extending beyond the written source material of George R.R. Martin's novels. In that season alone, we learned about the origins of the White Walkers, how Hodor became Hodor, the real parentage of Jon Snow and saw a new monarch (Cersei Lannister) seated on the Iron Throne. Moments like these also helped confirm — or rebuff — some of fans' biggest theories about the series. (Kudos to whoever predicted R+L=J, the OG fan theory, way back when.)

But with Game of Thrones charging ever closer to its endgame, how many good fan theories are left? Thankfully, there's still a few exciting prospects for the series that we'd like to see come to fruition. Here's four that could still — fingers crossed — come about.

The Wall will be destroyed thanks to the White Walkers — and Bran. Poor Bran Stark: It's not enough that his actions inadvertently consigned young Hodor to a tragic fate, but he'll almost certainly be a catalyst for the Wall's eventual destruction.

Hodor's death was a direct result of the Night King touching Bran during a vision, leaving Bran "marked." Bran's presence in the Three-Eyed Raven's cave with this mark nullified whatever vaguely defined magic was in place to protect the area — and with that spell broken, the Night's King and his army of undead wights were able to break the seal and enter the cave.

That was bad, yes. But many fans are theorizing that whatever magic was protecting the cave is likely similar to the magic that protects the Wall. Remember: The Children of the Forest helped the First Men build the Wall. What is Bran doing when we last see him in season six? He's being escorted to the Wall by his long-lost uncle Benjen, a White Walker-human hybrid who A Song of Ice and Fire readers might recognize by his "cold hands." When he passes through with his mark, it's quite likely whatever magic was protecting the Wall will cease to work, or exist.

Though it spells bad news for Westeros, it would make a lot of sense. The White Walkers are a foreboding presence for the entire series, but they'll never be a tangible threat to the rest of the realm if they're incapable of venturing south of the Wall. For the sake of the plot, the White Walkers need to go south. As the Starks have so often reminded us: "Winter is coming."

Tyrion Lannister is actually a Targaryen. There has been less on-screen evidence for this theory, but subtle hints in the books suggest that Tyrion Lannister is a Targaryen — and, of course, has no idea that's the case. This goes back to the "Mad King" Aerys Targaryen having a lustful ambition for Tyrion's mother, Joanna. As the theory suggests, the Mad King and Joanna were both in King's Landing at similar points, including her wedding night — and he could have forced himself on her.

It could explain the disdain Tywin Lannister had for his son, who is described as having hair so blonde, it's almost white in the books by other characters. Though in fairness, that hatred Tywin has for Tyrion could simply be from Joanna dying while giving birth to him.

The most telling on-screen evidence to support this is Tyrion's fascination with dragons. He didn't just dream about them as a kid: He is the only person aside from Daenerys Targaryen to approach the dragons in the show and have some kind of connection with them. Granted, it's not that much; the two we've seen him encounter just stare at him while he talks about his love of dragons, at least long enough for him to release the creatures from their shackles. But considering most characters who go anywhere near them end up getting burned alive, it's pretty significant.

An extension of this theory is that Tyrion, along with Daenerys and Jon Snow, would fulfill the three-headed dragon prophecy that Daenerys hears in season two at the House of the Undying. Dany is one head; Jon as a half-Targaryen should be the second. Could Tyrion be the third? Based on more set leaks from season seven, it's looking like a possibility.

Jaime is going to kill Cersei. Did Jaime Lannister look happy to see his twin sister — and incestuous lover — Cersei on the Iron Throne in the season six finale? No, he did not.

Cersei, having lost all three of her children, now seems to be driven by rage alone — a terrifying notion for all of Westeros. It's the type of monarchy that bears some likeness to the "Mad King," whom Jaime killed to protect the kingdom, earning him the "Kingslayer" moniker that's haunted him since.

In turn, many fans are theorizing that Jaime will be the one who ends up killing Cersei in a short-lived reign on the Iron Throne. The irony here — aside from the parallels to Jaime again saving Westeros from a maniacal ruler — is that Cersei has been troubled by a witch's prophecy from her childhood. The prophecy states that a "valonqar," which is High Valyrian for "little brother," will choke her to death.

Her treatment of Tyrion clearly suggests that she's always assumed he would be her undoing, but Jaime is also technically her younger brother, if only by a few minutes — and thus could technically be the prophesied valonqar. Game of Thrones is full of twisted irony, and Jaime killing his twin sister — who spent her life believing that their brother Tyrion would be her foretold killer — fits that mold.

Game of Thrones is a story being told by Samwell Tarly. It turns out the weird spinning calendar/astrolabe/gyroscope/"Sun-thing" from the show's opening credits is probably related to the Citadel, where maesters are trained in Westeros. Similarly, one maester is seen using magnifying glasses that could also be seen from the credits.

From one perspective, then, the opening credits could be a maester telling a historical account of Westeros.

But who would that hypothetical maester be? It could very well be Samwell Tarly. Sam is one of the few innately "good" characters still alive in the series, and his main purpose seems to be finding a way for the realm to defeat the White Walkers (he's also the one who makes it to the Citadel at the end of season six).

If the White Walkers are defeated, and some semblance of a happy ending occurs in Westeros, the whole Game of Thrones narrative could be Sam's retelling of the story many years later. But don't take our word for it: John Bradley, who plays Sam, is aware of the theory, too.

"I think it could mean any number of things," Bradley told the Hollywood Reporter in July. "One theory is that what we're seeing now and how we're experiencing Game of Thrones is Sam telling the story of Game of Thrones. If you take the logic of the story now, the story of Westeros and the story of the battle for the Iron Throne, it would be a book in that library. The visual motif of that is you're about to be told a story — the sense of an idea of being told a story, and people gaining that knowledge, the way Sam is absorbing knowledge in the library."

It would be a touching way to end Game of Thrones, but it's far from a guarantee. As chief sadist and worst character in modern television Ramsay Bolton callously reminded us, this isn't the type of series that doles out happy endings. For now, let's err on the side of caution.