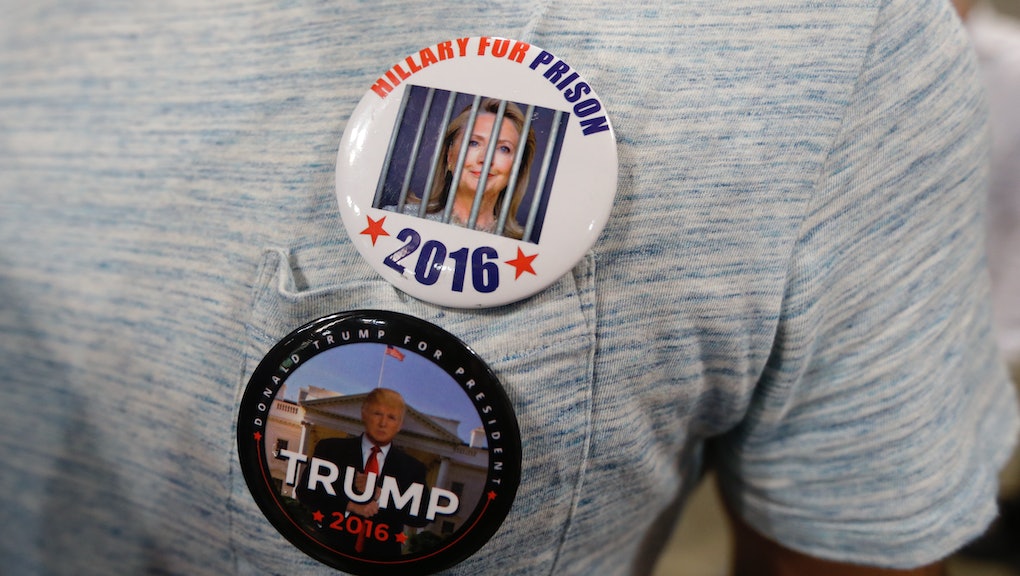 Every time Donald Trump says something terrible about a particular group of people, one wonders if it'll be the final straw — if he's finally said the one thing that will offend his supporters. So far, though, they've backed and reiterated his racist statements and his xenophobic rhetoric and shrugged off his misogyny.

So perhaps it should come as no surprise that according to a new study, people who are more hostile toward women are more likely to support Trump for president. Go figure!

As Vox reported, University of Michigan researchers Carly Wayne, Nicholas Valentino and Marzia Oceno examined "hostile sexism" within the Republican nominee's support base and found it was a more reliable predictor of Trump fervor than racism or authoritarianism.

The researchers interviewed 700 people in June 2016, which happened to be before much of the nation heard a hot-mic recording of Trump being disgusting about women. Participants reported whether or not they agreed with four questions, according to Vox:

1. Most women interpret innocent remarks or acts as being sexist.

The more sexist the participant, the greater the odds the participant stood in Trump's camp, the study found. As the researchers wrote in the Washington Post, voters' sexism — and their racism, and their Trump support — was fueled more by anger than by fear. That could be dangerous, because as the researchers wrote in the Post, anger "can powerfully mobilize voters and lead them to take greater risks and reject attempts to correct their misperceptions or process new information."

The research suggests that Trump's campaign is buoyed by rage-driven sexism, rather than the traditional values espoused by the Republican party. According to Vox, the researchers tested hostile sexism against benevolent sexism, which means buying into archaic and — as benevolent sexists will tell you — chivalrous gender roles that subjugate women to men. Researchers gave participants another set of four questions designed to gauge their benevolent sexism:

1. In a disaster, women should be rescued before men.

Men who purported to cherish women did not tend toward Trump. Hostile sexism, on the other hand, was a definitive feature of Trump supporters polled.

It's not surprising. In fact, it likely has something to with why, when that hot-mic recording of the candidate saying some deeply gross and troubling things about women leaked in early October, Trump's voter base didn't flinch and Clinton's lead didn't balloon.

Many of Trump's mostly white, mostly male supporters didn't seem to care about the tapes. After they surfaced, the ABC and Washington Post polled 740 likely voters; asked if they believed Trump forced himself on women, 68% replied yes — but 63% said that it wouldn't change their votes. Granted, some of those people — 47% of those surveyed — were Clinton supporters. But some — 43% of those surveyed — weren't.

However, Trump supporters aren't universally male. There are some Trump-loving women in there, too. So you have to wonder: What's motivating them to "dismiss" their candidate's — and his supporters' — woman-hating ways?