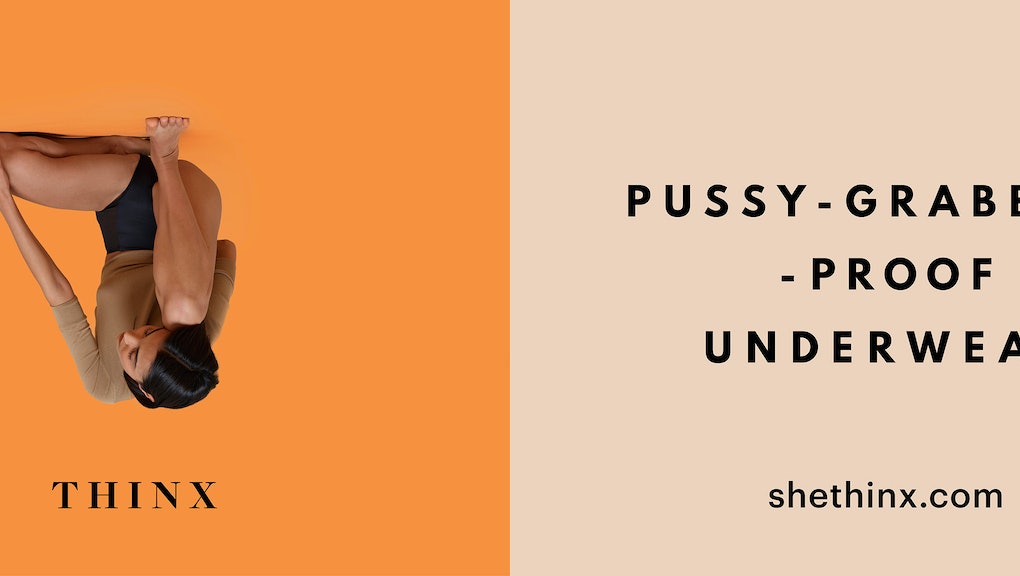 Donald Trump got the world saying "pussy." Should these ads get to say it too?

As we near the end of an election which has been full of unforgettable (and often unbelievable) comments, it is somehow not that difficult to predict which phrase of the campaign will remain in the public consciousness. That phrase, my friends, is "grab them by the pussy."

Donald Trump and his unyielding supporters have proven, talking about grabbing pussy isn't enough to disqualify a reality TV star from running for president. So should it disqualify an advertisement that condemns sexual assault from appearing in the subway?

The team at Thinx, a company that sells alternative menstrual products, doesn't think so. As part of an ad campaign for the Bay Area Rapid Transit system, in San Francisco, the woman-owned and operated business decided to update its ad campaign for "period-proof" underwear with language adopted directly from the Republican candidate.

In a proposal submitted to BART and its advertising liaison, Intersection, Thinx included an advertisement for "pussy grabbing-proof" undies, reasoning that if Trump can add "pussy" to the political lexicon, the company should be allowed to use the word in an ad to oppose sexual violence.

Thinx CEO Miki Agrawal argues that the phrase is fair game not just for people who promote rape culture, but for those who fight against it as well.

"The fact that ['grab them by the pussy'] was uttered by a presidential candidate, the Republican nominee, but 'pussy' can't be used by a feminist company ... speaks volumes to the patriarchal double standard we live in," Agrawal said in a phone call with Mic on Tuesday. "More people in that party would be offended by the word 'period' than they would be by 'pussy grabbing.'"

BART, however, disagreed. In an email to Mic, BART spokeswoman Alicia Trost explained how the transit authority and Intersection concluded use of the word "pussy" violated the transit authority's marketing policies. She cited BART's restrictions on ads that "contain words recognized by the community as vulgar, indecent or profane for display in a public setting that includes minors."

"This is not the kind of atmosphere we feel is appropriate to generate inside BART stations," Trost said. "While we understand the spirit behind 'reclaiming' vulgar words, our advertising standards make it clear that BART is not the suitable setting to begin such a campaign."

Agrawal and her staff of fellow feminists are no strangers to butting heads with advertising administrators over the limits of appropriate signage, particularly in public transit systems. In 2015, Thinx became enmeshed in a controversy with New York City's Metropolitan Transit Authority, which opposed the company's imagery and use of the word "period" in a series of proposed subway ads.

Facing widespread outrage over what appeared to be arbitrary enforcement of its advertising standards, the MTA eventually approved the Thinx campaign — but it doesn't look like BART will follow suit.

"Thinx is a company that stands against sexual assault and also isn't willing to be quiet about it."

Thinx brand director Veronica del Rosario said the reason that "pussy" is inappropriate for a public display doesn't make sense when the word has been tossed around and has more than one association.

"'Pussy' is not a profanity, as not only has it been seen in popular culture in movies or shows like Josie and the Pussycats, in band names like The Pussycat Dolls, in children's books such as The Owl and the Pussycat ... in nature as Pussy Willows," del Rosario wrote in an email exchange with Intersection, obtained by Mic, "but it has also been uncensored, printed, and spoken aloud in every major news outlet and network over the past few weeks."

When Intersection suggested Thinx resubmit the ad using symbols (to make the copy read "Pu*$%" instead of "pussy"), Agrawal maintained that would defeat the point of the campaign.

"We told them that ... anything like that is not an option; symbols defeat the whole purpose," she said in an email. "It's okay for a candidate for POTUS to use this language and for it to be reproduced and repeated uncensored, but a female-run company can't use the same word? It doesn't make sense."

Of course, Thinx has an interest in selling its product, she explained, but the company is also trying to make a statement about women's rights to their own bodies. Although Agrawal and her team agreed to pull the "pussy grabbing" ad — to be replaced with one that says Thinx are "glass ceiling-proof" — her brand still hopes to send a specific message: Sexual violence is unacceptable, but talking about it shouldn't be.

"[We are selling] pussy grabbing-proof underwear," Agrawal said. "We are saying, 'You don't have the right to touch my body without my consent.'"