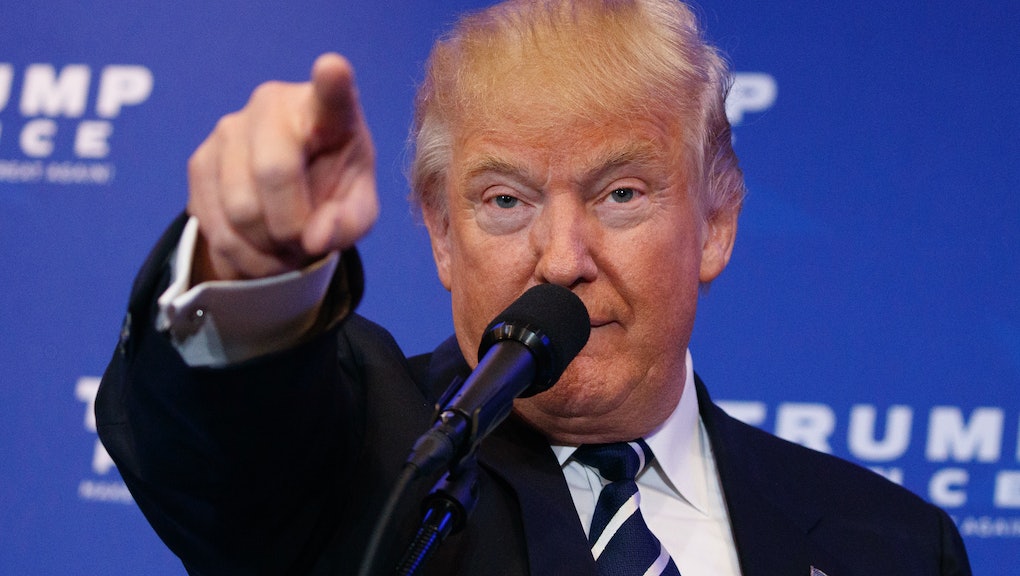 Here are the states Donald Trump needs to win the election

With a week to go until the 2016 presidential election, the candidates are campaigning hard in battleground states that are key to locking down a victory. For Donald Trump, things are looking up, after a new ABC/Washington Post tracking poll put Trump ahead of Hillary Clinton by a single point. While the slide might sound grim for Democrats, Trump's path to the White House is peppered with obstacles, namely Florida, North Carolina and Ohio.

If Trump can't secure Florida, he's basically a goner — a reality Clinton took advantage of Tuesday, when she returned to the state and took aim at Trump's treatment of women. Even though the Republican candidate was ahead of Clinton by 2 points last week, losing that ground would be catastrophic for the Trump campaign. Without Florida, Trump only stands a 2% chance of winning the election, according to FiveThirtyEight. Even if he manages to secure it, the win would only give him a 49% chance of taking the election — compared to a 98% chance for Clinton if she secures it, according to FiveThirtyEight.

Trump and Clinton are currently neck-and-neck in North Carolina, where each candidate boasts 44% of the vote, according to Politico. North Carolina is another swing state where, even if Trump wins, he'll still only have a 46% chance of winning, according to FiveThirtyEight. However, if he can't hack it, the loss will probably mean the presidency, since his election chances drop down to 4% without the state. (By comparison, if Clinton wins North Carolina, she's looking at a 96% chance of winning.)

But Trump can stay optimistic about his chances in the Tar Heel state: The North Carolina poll wrapped up the day before FBI Director James Comey announced plans to look into a Clinton aide's emails — a weak point in Clinton's campaign that Trump attacks whenever he's able. If there were ever a time to drill the point, this is it.

Historically, Ohio tends to alternate between parties almost every two presidential elections: Ohio voted for Democrat Barack Obama in 2012 and 2008; Republican George W. Bush in 2004 and 2000; Democrat Bill Clinton in 1996 and 1992; and Republicans George HW Bush in 1988 and Ronald Reagan in 1980 and 1984. It would follow that Ohio would vote Trump in 2016.

Even though the polls are tight in Ohio, that's typical for Ohio at this point in the race. Clinton is giving Ohio everything she's got, going after Trump's temperament and judgment, according to Politico. As it stands, Trump losing Ohio would hit him worst of all. According to FiveThirtyEight, an Ohio loss for Trump would translate to a 99% chance of a Clinton presidency.

If you're Trump, or a Trump supporter, the amount of tide-turning that would have to happen for a Republican in office right now is damn-near condemning. But never say never — even if you really, really want to.