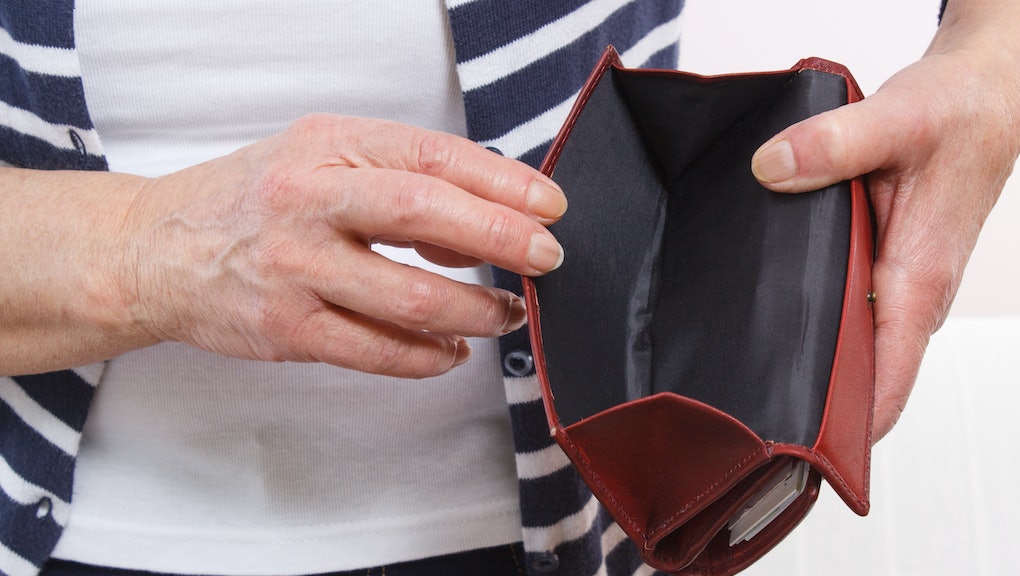 The scary truth about saving for retirement: Women may need to save twice as much as men

By now, you may have heard a few "rules of thumb" when it comes to saving for retirement: Some experts say you need to save 10% of income every year, while others say 22%.

But no matter whom you listen to, there's a big problem with following "one-size-fits-all" rules. Why?

These rules were written for both men and women — and women need more.

On average, women earn less, work for fewer years, and tend to make more conservative investments, which means they get lower returns. Then in retirement, women live longer and spend more on health care.

For the reasons above — plus the fact that women are more likely to take time off work for child and elder care — women actually may need to save nearly twice what men do to have enough money for retirement, according to an October paper by Diane Garnick, chief income strategist at TIAA, sent to Mic via email.

For many women, "relying on an average retirement savings rate set by their company may not result in enough savings," Garnick wrote.

"You should not think about being on par with your peers," she said in a phone interview with Mic. "You should think about the unique needs that you have."

Here are three big reasons women need to be careful — and how they can make sure they are actually saving enough.

The average man in America lives 76.4 years and the average woman 81.2 years, according to the Centers for Disease Control and Prevention.

This means you can't simply apply the same assumptions to men and women's savings, regarding how long a person needs money to last in retirement.

Because of this longer life expectancy, a 30-year-old woman should be saving about 37% more than a man each month, according to financial adviser Nicki Blignaut of Innov8 Bluestar Financial Services.

Women must use different salary assumptions than men.

Most of us are familiar with the well-cited number: Women earn about 78 cents to a man's dollar. But this disparity is even bigger in high-skill professional fields, where women are earning a comparative 72 cents, Bloomberg explained.

And that's not the only reason women can't use the same salary assumptions as men: Women are also less likely to get promoted — and promotions tend to come with pay raises.

A lot of generic retirement financial advice is predicated on the notion that a person's work life will span 40 years. However, according to Social Security data, men tend to work 38 years, while women on average are working 29, Garnick wrote.

For that reason, Garnick contended, if a male college graduate needs to save 10% of his lifetime income to have enough for retirement, a female graduate would actually need to save 18%.

The span of a woman's work life is often curtailed by the need to care for children and older or ill family members — one reason women are 80% more likely to live in poverty once they're in retirement, according to the National Institute on Retirement Security and reported by the Associated Press.

Women are not just living longer and working less than men; they're also more likely to be single parents and to use their savings to take care of family, the AP reported.

While men actually tend to earn a premium for having a child — and their chances of getting hired increases with a family — women are penalized financially.

"While the gender pay gap has been decreasing, the pay gap related to parenthood is increasing," Michelle Budig, a University of Massachusetts Amherst professor, wrote in a paper for Third Way.

Budig explained that men with kids get over a 6% bump in their pay, while a woman loses 4% of her salary for each kid — and the penalty is even worse for low-income women.

How can women fight back — and save enough for retirement?

For starters, information is power.

"We live in an era where gender equality is increasingly becoming the norm, but we also happen to live during a time with ample access to the data and tools necessary to draw conclusions. The data enables us to identify the obstacles women face during their savings and retirement phases. The tools enable us to provide the clarity necessary for resolving the problem at hand," Garnick wrote.

One tweak that might be smart? Ample evidence shows that men are more aggressive investors and — when it comes to choosing retirement funds — women are more likely to use target-date funds, which get less risky over time.

Garnick encourages women to be a little more aggressive and high-risk with their investments; that might mean ticking up exposure to stocks, for example.

Other than that, and making sure your investments are low-fee, your best and most realistic bet is saving more — a lot more.