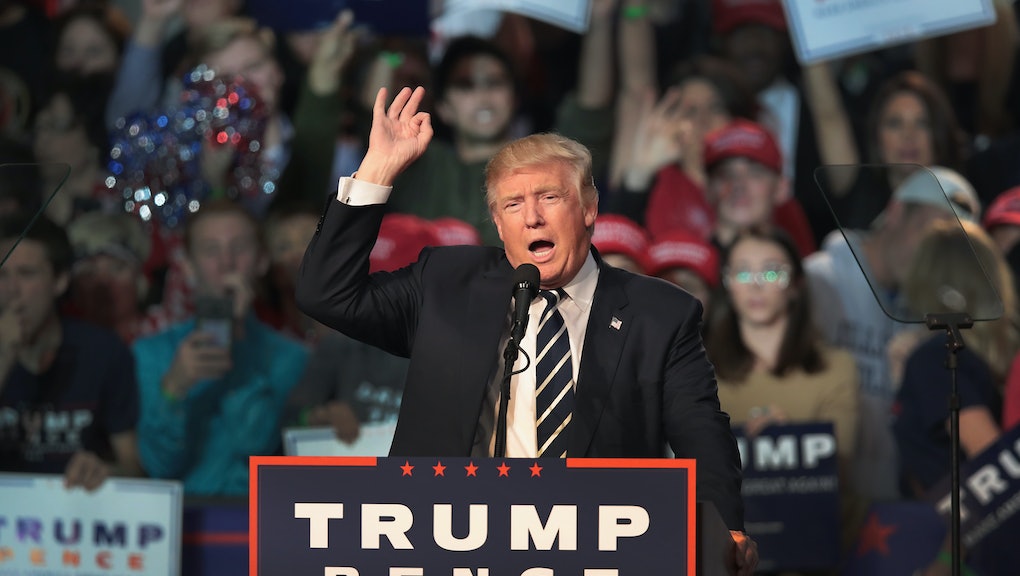 3 signs Donald Trump is a threat to democracy

There's a peril in claiming Republican presidential nominee Donald Trump is uniquely dangerous and unqualified for the White House: It's been said so often that it has started to lose meaning.

But the sentiment bears repeating — and the reasons deserve close attention.

And it's no small matter that Trump's record as a businessman suggests a penchant for bending and even reshaping rules for personal gain and at the expense of others.

Despite spin from his campaign, Trump is neither the kind of establishment Republican that normally buoys regulation-hating markets — nor is he, really, the authentic populist with the qualifications to fight for the little guy that his supporters seem to see.

His decades of business dealings and flirtations with misinformation during the election paint a very different picture: Trump's behavior reflects a worldview that is antithetical to democracy.

Here are three pieces of evidence that he is a threat.

Trump's misinformation about the benefits of isolationism is working.

Immigrants are essential to America's democracy.

Past and current immigration "has done so much to enrich American culture, invigorate democracy, and stimulate our economy," said Daniel Griswold, an expert in trade and immigration with Mercatus Center at George Mason University, in a phone interview with Mic.

Despite what Trump might have you believe, the argument that healthy immigration improves a country's economy is not especially controversial — even undocumented workers help pay billions of dollars into Social Security.

But Trump's rhetoric plays to our worst instincts as a nation: 61% of Americans think that immigration "jeopardizes the United States."

That's one reason why 370 economists together signed a letter that accused Trump of "misleading" the public on issues like immigration and trade, and that his statements "reveal a deep ignorance of economics."

Indeed, Trump has also successfully peddled misinformation about the dangers of free trade: Two thirds of Trump supporters say that free trade is a "bad thing" despite the fact that historically, open trade policies have tended to benefit people around the globe — including Americans.

Let's set aside the fact that it's unlikely Trump would be able to bring back manufacturing jobs, even if he raised barriers to outsourcing. Even in the best case scenario, consumers would likely be hurt: Research shows free trade greatly increases purchasing power, especially for the poor.

"Mr. Trump's stance on trade shows not only ignorance of basic economics but also an ignorance of America's whole post-war foreign policy architecture," Griswold said. "A big reason for our turn toward free trade from protectionism after World War II was to get closer to our allies and hopefully prevent another war, and that's been very successful."

Trump's behavior suggests he believes in gaming the system.

If you believe democracy depends on a respect for the rule of law, it should trouble you that Trump brags about avoiding tax.

During the first presidential debate, Clinton accused Trump of not paying taxes, alluding to reports that he may have avoided paying federal tax for decades.

Trump fired back, "That makes me smart."

Though he still has not released his tax returns, the first nominee in decades not to do so, new details which shed light on how Trump may have been able to avoid tax — released by the New York Times — suggest Trump's methods involved the "legally dubious" application of a practice called an debt-for-equity swap.

Throughout the 1980s, the Times reports, Trump borrowed from banks to open casinos in Atlantic City. Then, when the casinos were unsuccessful, he got his debt forgiven by swapping it out and giving the banks equity in his casinos — which then went bankrupt.

By using equity, Trump would have been able to get out of a major tax bill: If the banks simply forgave the debt, he'd owe tax, because forgiven debt counts as income. The swap, on the other hand, would not count as income.

While this alleged maneuver was not illegal at the time, it has since been outlawed by Congress. This loophole would likely have allowed at least some of Trump's earnings to go untaxed, explained Kyle Pomerleau of the Tax Foundation in a phone interview with Mic.

Trump declined to comment on the Times story, but has said to CBS: "Nobody knows debt better than me. I've made a fortune by using debt and if things don't work out, I renegotiate the debt... you go back and you say, 'hey, guess what? The economy just crashed. I'm going to give you back half.'"

Trump's defenders certainly can argue that because the alleged tax moves were not illegal at the time, criticism is unfounded; they can claim the moves were merely "aggressive" and even "innovative." It is not like anyone wants to pay the IRS more than it is owed.

But even if you are impressed by legal tax avoidance, it might be harder to stomach the discovery, via an International Business Times investigation, that yet another one of Trump's perfectly legal maneuvers — beating a lawsuit against investors whose money he lost — may have helped changed case law for everyone.

The IBT reports that Trump's case helped codify the "bespeaks caution" doctrine, which holds that if companies include enough fine print, they can't be held liable for selling products based on ultimately incorrect financial predictions — that end up causing investors to lose money.

Trump's use of the doctrine was actually cited in a bill passed shortly after the 1994 Republican-led takeover of Congress. Then-president Bill Clinton tried to veto the law on the grounds that it would have the "effect of closing the courthouse door on investors who have legitimate claims," the IBT reports, but his veto was overruled.

Trump has praised leaders and leadership styles that would undermine democracy.

"Is Trump a threat to democracy?" wrote Kenneth Winston, an ethics lecturer at the John F. Kennedy School of Government at Harvard, in an email to Mic. "You bet."

Trump's claims, without evidence, that the system is rigged delegitimizes "the whole electoral process," Winston said.

Indeed, it does not seem like a fluke that Trump has insinuated he won't accept the results of the election if he loses.

"To a political scientist who studies authoritarianism, it's a shock," Harvard professor Steven Levitsky told the New York Times. "This is the stuff that we see in Russia and Venezuela and Azerbaijan and Malawi and Bangladesh, and that we don't see in stable democracies anywhere."

But Trump's words are less of a shock if you zoom in on his patterns of his past language seeming to defend or praise dictatorial leaders like Kim Jong Un of North Korea, Bashar al-Assad of Syria, Vladimir Putin of Russia, Saddam Hussein of Iraq and Muammar Qaddafi of Libya.

Trump has even described China's Tiananmen Square massacre as demonstrative of "the power of strength": "When the students poured into Tiananmen Square, the Chinese government almost blew it. Then they were vicious, they were horrible, but they put it down with strength," he said in a 1990 Playboy interview.

This attitude is all the more troubling when you consider the fact that Trump has suggested the U.S. would be "better off" if more countries had nuclear weapons.

Each of the three major factors above are worrying in their own right: Together they paint a picture of a leader that would undermine America's history — as a country built by immigrants, as a place where stakeholders are asked to play by the rules and pay their fair share, and as a nation that promotes democracy and peace.

But to be sure, even if Trump loses, these concerns will not disappear.

Whichever candidate takes the presidency will need to be held accountable: America needs more transparency in government, not less, and less violence and war — not more.

The Trump campaign did not reply to a request for comment.