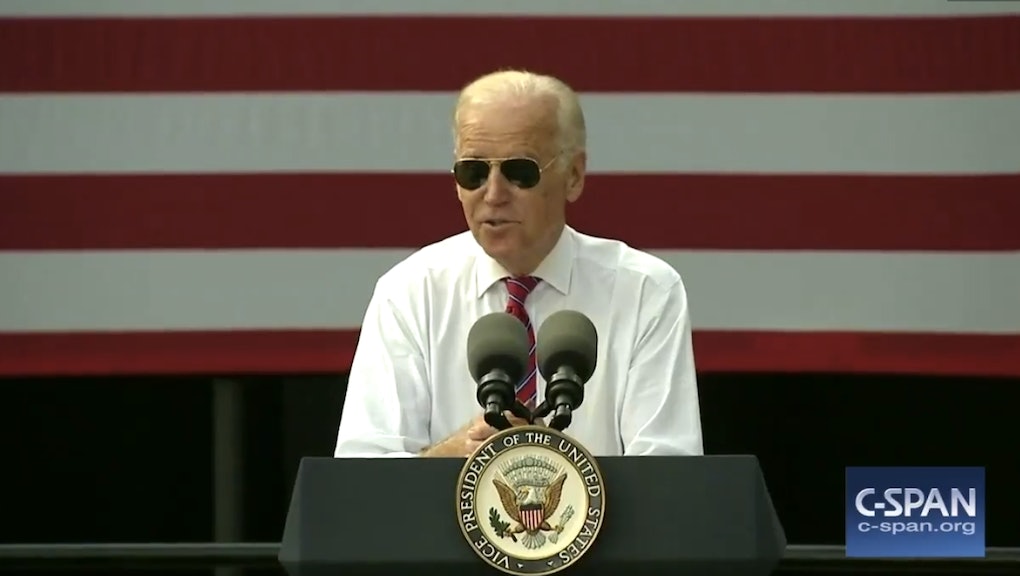 Please. Someone, anyone, give Joe Biden a Ray-Ban campaign.

It's no secret that in just a few months, Vice President Joe Biden may be out of a job. Sure, there have been whispers of him being named secretary of state by Hillary Clinton, but let's not get ahead of ourselves here.

Come January 2017, Joe Biden will surely have more time to himself to pick up a few new hobbies. Maybe he'll start to fish more, or golf. Maybe he'll discover his love of cross-stitching, or baking. Or maybe, just maybe, he'll take this free time as an opportunity to break into the fashion industry.

This fantasy became more pressing and slightly more possible on Wednesday afternoon, when C-SPAN tweeted out a video of Joe Biden making a speech in support of Clinton in Tampa.

He's standing there, talking all this political mumbo jumbo, but then... But then! He reaches into his back pocket, pulls out a pair of Ray-Ban aviator sunglasses and slips them onto his face.

The crowd, and we're not being hyperbolic here, went fucking wild.

Given that enthusiastic response, Biden hinted at his possible intentions.

"I'm doing this because maybe when I need a job, Ray-Ban may have me as a sponsor," he said, probably just half-kidding.

Well, well, well, Mr. Vice President. Look at the date and the fucking time. We think that maybe now, sir, your time has come.

"I've been wearing these since I've been 15 years old, I don't know," he continued.

Now doesn't that sound like a man completely ready and prepared to be the face of a Ray-Ban campaign?

Joe Biden, listen to us. On January 20, you may be out of a job. After you spend some quality time with your wife, Jill, you could very well be bored.

We mean, really. Look at this.

Honestly, who wouldn't want to buy aviator sunglasses from this 73-year-old man?

Just look at that smile.

America is ready, Ray-Ban. Give Joe Biden a chance.

Mic has reached out to Ray-Ban in hopes that they fully understand the importance of this plea.