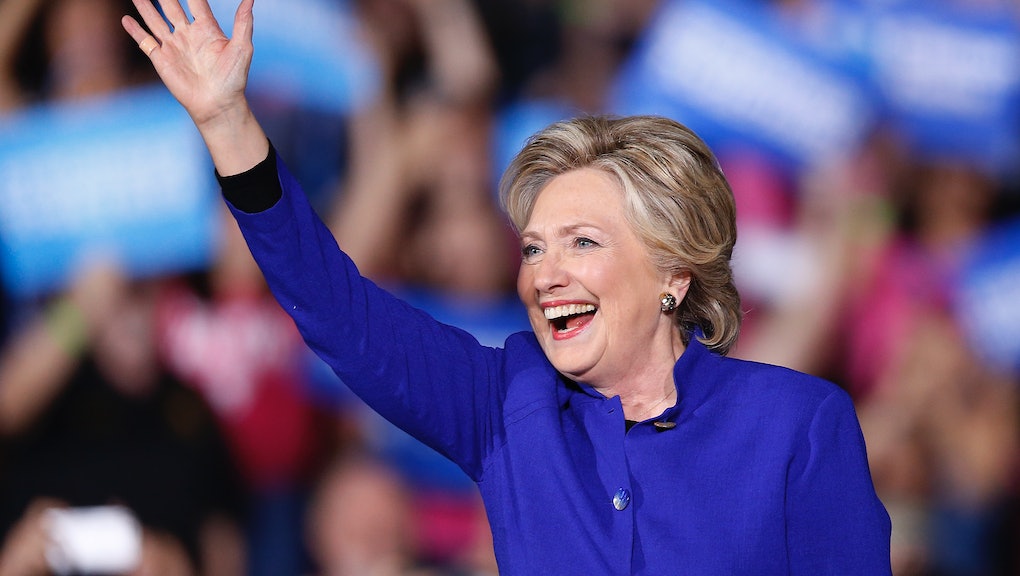 Hillary Clinton Polls: What the latest figures say about the Democrat's chances on Nov. 8

With less than a week to go before Election Day 2016, Hillary Clinton maintains her lead in the polls. According to the latest head-to-head match-up by RealClearPolitics, the Democratic candidate is just under two points ahead of her opponent, former reality television star and real estate mogul Donald Trump. The gap between the two candidates has narrowed of late, but that's no reason for Democrats to panic.

On Friday, FBI Director James Comey casually and vaguely mentioned to Congress that the bureau was revisiting the issue of Clinton's private email server. Comey closed that case in July, but is reconsidering after emails he deemed possibly "pertinent" to the Clinton investigation surfaced in the course of a separate investigation of Anthony Weiner for his alleged sexting relationship with an underage girl. Agents found tens of thousands of emails to and from Weiner's estranged wife, top Clinton aide Huma Abedin, on his laptop — and so here we are.

Critics have accused Comey of trying to influence the outcome of the election by unnecessarily dragging Clinton's albatross back into the media's spotlight, but the surprise announcement doesn't seem to have hurt her standing much.

According to a New York Times/CBS News poll released Thursday, Clinton leads Trump with 45% support among likely voters polled to Trump's 42%. The 3-point difference is negligible, within the survey's margin of error. Roughly 60% of those polled reported that neither the news of Clinton-related emails, nor the release of the so-called Trump Tapes — on which the candidate can be heard saying some appalling things about women — would influence their votes: Indeed, about 20% of participants had already cast their ballots. The poll found that enthusiasm for the Republican nominee seems to be climbing once more, while Clinton's has remained steady since September.

It may be the case that slow and steady wins the race: The New York Times' election forecast gives Clinton an 86% likelihood of winning the White House. The FiveThirtyEight's prediction is similarly optimistic albeit slightly less rosy, giving the candidate a roughly 67% chance of becoming the next president.

According to the final Marquette University Law School poll that came out Wednesday, the Democratic nominee is ahead of her opponent by 6% in the tipping-point state of Wisconsin. About 16% of those polled had already cast their votes, 64% of them for Clinton and 25% for Trump.

Another Wednesday poll, this one by CNN/ORC, put Clinton ahead in the key states of Pennsylvania and Florida. In Pennsylvania, Clinton is up by 4 points; in Florida, her lead is smaller — just 2 points. The poll also showed Trump winning in both Arizona and Nevada, although that's not a huge surprise: Both states are typically red.

According to the latest Quinnipiac University swing state poll, also released Wednesday, Clinton is also ahead in North Carolina, where she polled 47% support to Trump's 44%. Quinnipiac gives her a 1-point edge over Trump in Florida — 46% to his 45% — and a 5-point margin in Pennsylvania. Notably, it gives Ohio to Trump: 46% of likely voters polled backed Trump while 41% were with Clinton.

Every president to have won the election since 1964 has won Ohio. However, since the state's makeup is mostly white and Clinton's voter base is racially diverse, the state's importance in the 2016 election has been muted somewhat. Clinton could win the presidency without it.