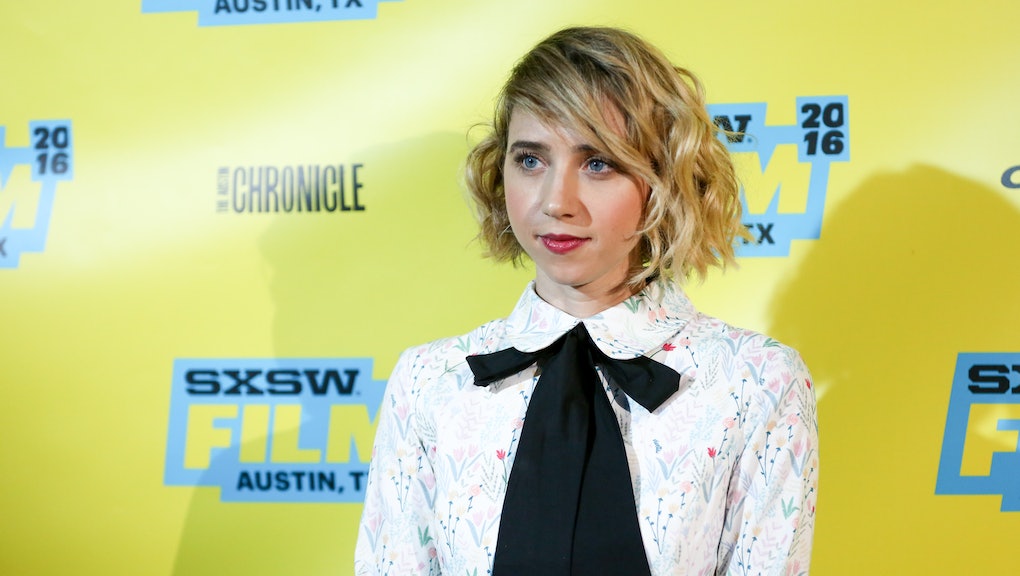 Zoe Kazan explains why she's #WithHer — and why she thinks you should be, too

I like Hillary Clinton. I think she is the most qualified person to be president of the United States, and I am heartened that — partially due to the success of Bernie Sanders' campaign — she is running on a fairly liberal Democratic Party platform. I also think that, with her A-student personality, her attention to detail and desire to create actionable plans, she will make an excellent commander-in-chief.

First and foremost, I am not voting for Hillary just because she is a woman. Yes, of course, I am excited she may be our first female president. Representation matters. She may not be the perfect candidate; she cannot lift everything we want to put on her shoulders. But Hillary can only be what she is: a 69-year-old white woman with a mixed record on some of the issues that concern liberal voters.

When someone helps break a barrier in a system we perceive to be broken, we have the desire for them to change everything that is wrong with that system. We want them to be perfect. But we have to hope that, by being who she is, Hillary can make it easier for all women — and by extension, all people — to enter the White House. It is our job to keep fighting for representation, and for what we believe in, past this election.

I have to admit, I laughed when Donald Trump questioned Hillary's stamina in the debates. It seemed preposterous: this 70-year-old man, given every advantage in life, who literally lives in a gilded palace, questioning the constitution of a woman who has given her life to public service. Consider the perseverance and strength it has taken for Hillary to get where she is today. Women born in the 1940s were not expected to have political careers. They were expected to get married, have children, support their husbands. What bravery does it take to embark on the path Hillary has taken, without a single role model to point to? Think what a thick skin you would have to grow, to ignore derision and belittling from the white men in power who don't want to let you into their ranks. And you still expect her to be "likable"?

There is no room for "likable" when you are among the first of your kind — when you have to work twice as hard to get half as far. "Likable" can even be a liability when you are trying to surmount feminine gender stereotypes. Remember how much flack Hillary got for covering her mouth while watching the capture of Osama bin Laden? God forbid she should ever cry.

I understand the criticisms leveled at Hillary; what I don't understand is the idea that she's the "lesser of two evils." But let's look at the other candidate: Here we have a man who began his campaign declaring all Mexicans to be rapists and who views immigrants as a threat rather than an asset to our country. He sees women as objects, has promised to repeal Roe v. Wade and marriage equality, and has spoken against LGBTQ rights. He casually mentions the use of nuclear force, bullies anyone who speaks out against him and he has rallied, retweeted and relied on white supremacists and neo-Nazis during his campaign.

When I first heard the tape of Donald Trump and Billy Bush on the bus, I felt ill. I flashed back to every time a man has attempted to exert power over me by touching me or speaking to me inappropriately. There have been too many times for me to count, starting when I was so little I didn't yet have language for what was happening. The way Donald Trump treats women is personal for me. It should be personal for all of us. This is our country.

Remember "love thy neighbor as thyself"? I don't have to be black or Latina or Muslim to be horrified at the way Donald Trump disparages people of color in our country. Yes, we are still very far from equality in practice. But we can and must continue to try for better, together — to strive for empathy, not hatred and fear. We must work to get closer to the ideals our forefathers set out, ideals that reached beyond the racial and sexual politics of their own time, that cast a challenge out into the ether that we are still striving to reach: "that all men are created equal."

Donald Trump and his defenders keep excusing what he says as "just words." But words matter. Donald Trump's casual use of racist, sexist and bigoted language means something. That's true when he says he respects Putin, threatens to put his political opponent in jail or implies that all black people live in "inner cities." It means something when he calls for "extreme vetting" of Muslims. We had internment camps in this country not very long ago. Have we forgotten?

At first, when I heard people say they would not vote, I thought, "You must not have anything at stake." In other words, you must be a white, straight, middle-class Christian man, who lives in a bubble of your own privilege. But now I just think, "You must not understand what you have at stake." Our democracy is on the line; the best of ourselves is at risk. This is why I'm with her. For all our sakes, we must vote for her.

#WhyImWithHer is a series of essays in support of Hillary Clinton written by Alfre Woodard, Tracee Ellis Ross, America Ferrera, Constance Wu, Yara Shahidi, Uzo Aduba and Zoe Kazan. This is a project of EMILY's List, the nation's largest organization dedicated to changing the face of power by electing pro-choice Democratic women to office at all levels. Read more here.