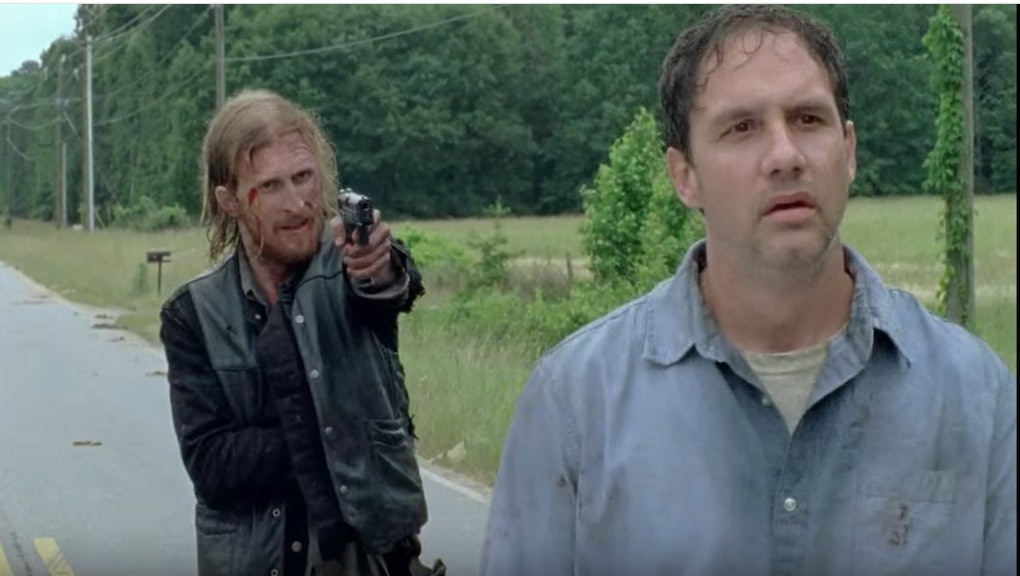 If one was thrust into the post-apocalyptic world of The Walking Dead, could we agree that the Kingdom is where we would want to live? As the seventh season's second episode showed, they are ruled by a campy, ostentatious faux-monarch in King Ezekiel; he has an awesome tiger named Shiva who enjoys sunbathing and other tiger things; there are movie nights and a choir; and every meal at the Kingdom is cobbler. It sounds heavenly.

Contrast that to our first look at the Sanctuary in season seven's third episode, "The Cell" — the home of Negan and the Saviors — and you're essentially looking at hell. Especially if you're a prisoner like Daryl Dixon.

The consequence of Daryl punching Negan in the face in the season premiere, which subsequently resulted in Negan brutally killing Glenn as punishment, is withering. At first, Daryl is naked, confined to a cell that blasts annoyingly jovial music so he's unable to sleep. There's no cobbler for Daryl: Dwight feeds him dog food sandwiched between bread, and when Daryl eventually gets a prisoner's uniform, it's emblazoned with the letter "A." Presumably, this is The Walking Dead's second reference to The Scarlet Letter, which would probably have Nathaniel Hawthorne turning in his grave.

But for any viewers who have since forgiven Daryl for inadvertently getting Glenn killed, this is an unpleasant sight. In turn, some expressed their exasperation at Daryl's suffering through Twitter.

Unfortunately, The Walking Dead has executed an interesting concept with poor execution. Focusing on Daryl and the Saviors — particularly Dwight, who has a genuinely compelling comic book relationship with Negan — is ripe for character development, which is paramount for a villainous group the audience still doesn't know much about.

The episode's failures, however, mostly fall on Negan, and it has little to do with Jeffrey Dean Morgan's portrayal of the character (he's trying his best!). Morgan can only do so much with comically poor writing; he spends most of the episode spewing out lines from his bloody introduction to the series. Another, "Are you pissing your pants yet?" addressed to Daryl, and yet another monologue on the importance of rules.

All of this, mind you, while carrying his barbed wire-covered baseball bat, Lucille, mostly for show. Granted, the bat's with him throughout the comics, but the on-screen adaptation is akin to Zach Galifianakis sporting a satchel in The Hangover for a punchline. Negan's a comic book villain, yes, but the show's Negan is essentially a caricature of himself. As Vox's Todd VanDerWerff explained after the season premiere, Negan's ruining what made the series great in the first place.

"The Cell," like the previous two episodes of the show's seventh season, opted to stick in one setting for its entirety (Negan's killing of Abraham and Glenn in the premiere, and the Kingdom in episode two). The show is world-building, setting up the comic book's All Out War arc, but that's also been its downfall. Not much has happened — aside from answering the season six cliffhanger — and by keeping Rick and Alexandria (remember Alexandria?) out of the picture, it's hindered the narrative.

We still haven't seen the fallout of two major characters' deaths; in fact, Daryl is the only protagonist in the past two weeks shown on screen who's been affected by it at all. The weight of the moment has faltered, and it feels like The Walking Dead can't move forward — or, even more indicting, doesn't have much else to offer its viewers. If you've seen their promotional material for season seven, which entirely focused on its poorly executed cliffhanger, you'd likely make the same conclusion.

If this concerns anyone else, AMC has announced that the fourth episode will be a whopping 85 minutes. At best, it can jumpstart season seven with a balance of clever writing, character development and world-building, rather than a disjointed storyline.

At worst, well, why are you still watching?