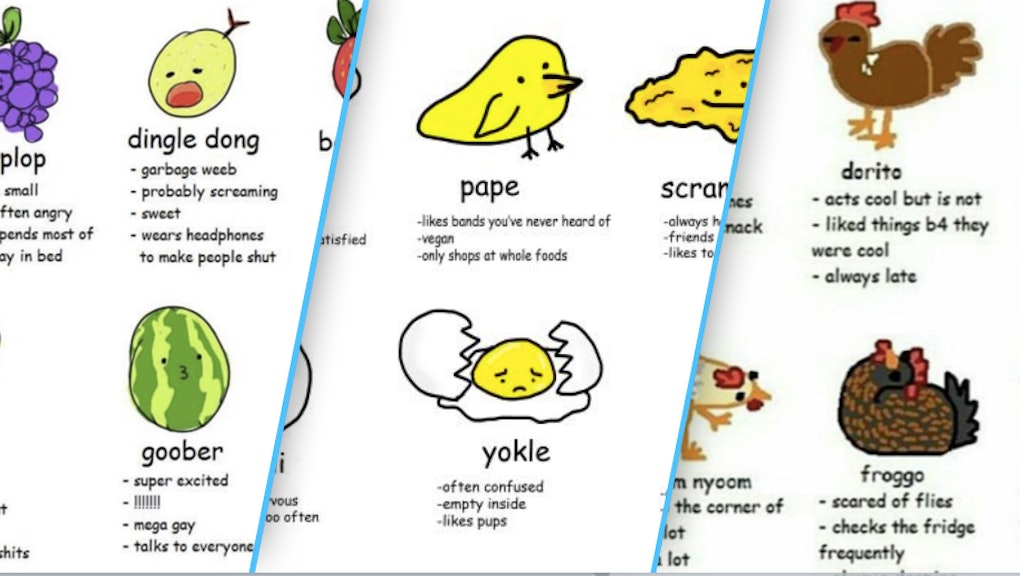 Tumblr's "Tag Yourself" meme, explained: Why the best meme of 2016 is so relatable

If you spend a lot of time deep in the trenches of Tumblr and love #relatable content, then you've probably seen some Tag Yourself memes.

Tag Yourself is like those Facebook-friendly web quizzes like "Which Sex and the City Character Are You?" — but these memes are side-splittingly funny, purposefully anti-establishment and actually relatable.

What are they, exactly?

The Tag Yourself memes feature a slew of cute pop-culture references, prompting you to pick the one you most identify with. The memes are often recognizable thanks to the "poorly drawn avatars of the characters and ill-phrased descriptions of their traits in Comic Sans," reads the Know Your Meme page for the meme.

The history of Tag Yourself

According to Know Your Meme, the meme can be traced back to Jan. 24, 2016, in which a Tumblr user posted "MS Paint-style illustrations of six bird-like original characters with the caption challenging its viewers to 'reblog and tag which bird you are.'" The post got over 101,000 notes in the first 72 hours, and the meme exploded.

The Daily Dot's Gabe Bergado rounded up some of the best examples of the meme right when it started to go viral. Tag Yourself, like the Zodiac-themed "Signs As..." meme that blew up in 2015, was all about "sense of identity — whether it's being able to pick it or figuring out an extension of your real identity," Bergado wrote.

In a way, it's a natural extension of 2014's "me irl" meme and other "relatable" internet memes — like 2012's What Should We Call Me, which gave rise to ubiquitous phrases like the ironic "I'm this guy" and the slightly more earnest "that feel when..." or, more simply, "when..."

Anyway, Tag Yourself is a fun little meme that is made up of all the fixings needed for virality: It makes you laugh, it feeds your narcissism and it'll probably get a lot of likes and shares. Soon you'll be tagging yourself in everything, from posters on the subway to links your co-workers post in Slack.

It's also dangerous. This is the real you, exposed. Once you tag yourself, there's no turning back.

"I'm such a Kob!" you might proclaim if you're living in the valley of the dead and dying.

"You're so post-impressionism!" you might hear your friend tell your other friend who most certainly is a cooler older sister who likes cranberries.

Go ahead, soul search even more. Tag yourself: