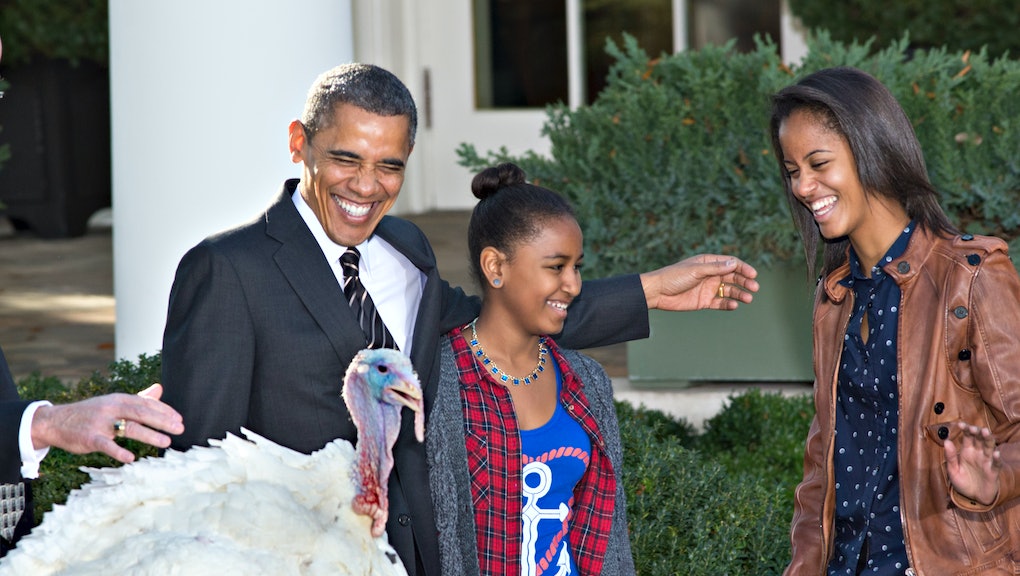 Before every Thanksgiving, at least one lucky turkey is spared its fate of ending up roasted on a platter and is officially pardoned by the president of the United States.

After being elected president in November 2008, Obama spent his first Thanksgiving in the White House in 2009. For his first pardoning on the day before Thanksgiving, he waved awkwardly at the turkey whose life he was so graciously sparing. He also mentioned prior Presidents Eisenhower and Johnson eating the birds gifted to them saying, "You can't fault them for that, that's a good looking bird." That's one nervous looking bird, if you ask us.

After a year of experience — and we're sure plenty of feedback from his daughters, who could re-watch their dad very publicly deal with live fowl on YouTube — Obama started getting the hang of this whole pardoning thing. He even pet the turkey!

The event was even replicated near Obama's wax likeness in England, for some reason.

Obama was actually pretty joyous at his third turkey pardoning, and let his daughters take some of the spotlight in the ceremony while silently praying, five more years!

Recently elected for four more years in the presidency and in the White House, Obama appears not only relieved that he doesn't have to move come January, but also secretly happy he gets to interact with four more live turkeys after this one. He was so happy and thankful that it hurt.

This turkey, Popcorn, waited its entire life to be pardoned by President Obama. Here are both Obama and the turkey living their dreams. The YouTube video of the special event captures some of Obama's best dad jokes. "The office of the presidency — the most powerful position in the world — brings with it many awesome and solemn responsibilities. This is not one of them," he joked of the event we all know he counts down the days to every year.

This turkey was lucky enough to make it inside the White House, though most of the pardonings are held outdoors. It remains unclear if the bird was able to socialize with the presidential pets, Bo and Sunny Obama.

This was also the year that Malia official became too cool for turkey pardoning, as the image below depicts. Teenagers!

So confident, Obama is a pardoning pro by 2015. As he mentioned in his seventh pardoning speech that year, "Time flies, even if turkeys don't."

Outside in the Rose Garden once again, Obama pardoned Abe, the turkey, and an alternate turkey, Honest. Puns intended. Opening his remarks, Obama noted that lately there had been a "fierce competition between a bunch of turkeys trying to win their way into the White House." Think about it.

Obama declared Abe TOTUS, i.e. Turkey of The United States, though he does not permanently reside at the White House. You can catch up with Abe here.

We can't wait to see what Obama brings to the table (or rather, saves from the table) for 2016's turkey pardoning.