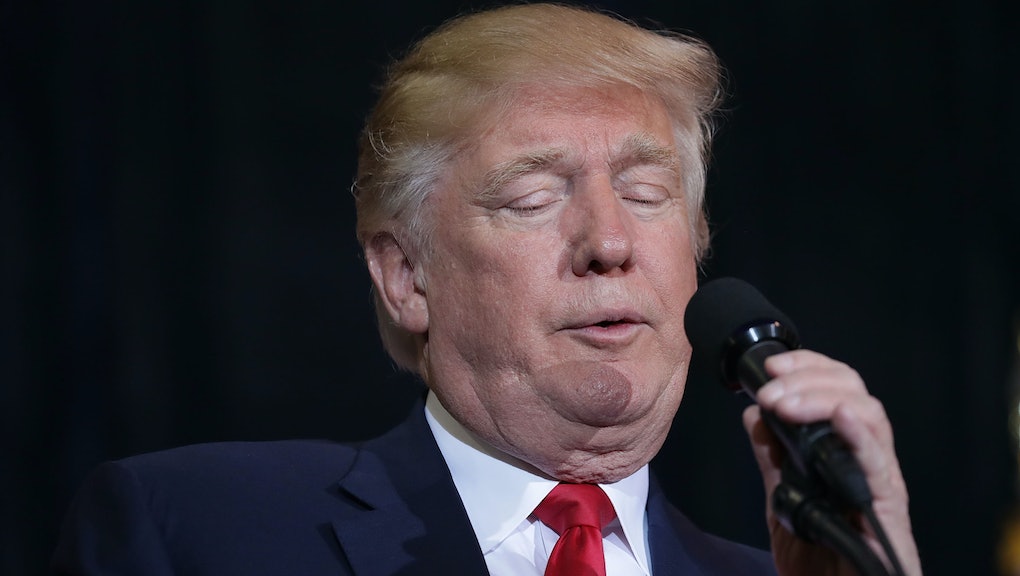 Here are all the promises Donald Trump broke during his campaign

Donald Trump has made a lot of promises during his year-and-a-half-long quest for the presidency.

And with just three days to go before Election Day, it appears many of those promises will be broken.

From releasing his taxes to his plan to combat the Islamic State, here are all of the promises Trump has broken as a presidential candidate.

Trump will officially become the first presidential candidate in more than 40 years to not release his tax returns.

In January of this year, Trump said he would "absolutely" release his tax returns.

In Feburary, that target moved to releasing the returns "over the next three [to] four months."

We still haven't seen those documents.

Because of this, the American people have no concrete answers on questions like how much he's donated to charity, where his money is invested and how much he's paid in taxes throughout his life.

What we do know is that Trump owned up to inflating his net worth at a deposition in a lawsuit, an admission Trump made under oath.

We also saw the state portion of his 1995 tax return, after it was leaked to the New York Times.

The findings from that leaked document don't paint a pretty picture for Trump, showing he lost nearly $1 billion that year — likely exempting him from paying federal income tax for nearly two decades.

Donald Trump has claimed to have given more than $100 million to charity throughout his life.

But the campaign has provided zero evidence to back that up.

Because Trump and his campaign have refused to disclose his charitable giving, Washington Post reporter David Fahrenthold has worked diligently to contact hundreds of charities Trump could have given to throughout the years.

Fahrenthold found Trump personally gave less than $10,000 in a seven-year period, amounting to .0001% of the charitable funds Trump claims to have given out.

Donating $100 million to his own campaign

It's a constant refrain from Trump on the trail: He tells us he's personally contributed $100 million to his presidential campaign.

However three days before the election, Trump is falling $44 million short of that promise, according to filings with the Federal Election Commission.

Even more, a large portion of what he put into his campaign went back into his own businesses.

According to CNBC, Trump spent $8 million of his campaign funds at Trump owned or operated companies.

Trump has said he will defeat ISIS.

He's said he knows more about ISIS than the generals do.

But with three days to go before the election, all we know about Trump's plan is that it's "extremely tough."

Other than that, his plan is secret.

In his words, we just have to "believe" it exists.

Disclosing where his money is invested

As president of the United States, Trump would have to deal with the American economy as well as with with foreign leaders and foreign countries.

This is why presidential candidates release their taxes and reveal where they have money invested, so the American people can know whether the president has conflicts of interest as they propose policies.

But as of today, just days before the election, we have absolutely no idea whether Trump has financial ties to major banks or foreign countries that could impact his policy decisions.

If he has money invested in China, for example, we have no idea if he'd decide against certain trade deals or monetary policy with the country that would have an effect on his own bottom line.

In August of this year, Trump promised he'd release a list of the banks he had mortgages with, for example.

Trump launched his campaign by calling Mexicans "rapists" and "criminals."

He then vowed to start a deportation force to round up and expel undocumented immigrants, and then keep them out of the country by building a wall (that Mexico will pay for).

When it became clear that wasn't a winning message with the country's growing Hispanic population, Trump dialed back his rhetoric.

In July, the Republican National Committee announced Trump would launch a Hispanic outreach tour after the party's convention in Cleveland.

That tour never got off the ground, after events were canceled for various reasons.

Now, it turns out Trump is paying for that broken promise.

They were overwhelmingly Democratic.

In fact, Hispanic turnout was so high that Jon Ralston, the dean of the Nevada press corps, felt comfortable saying Trump now has no way to win the state on Tuesday.