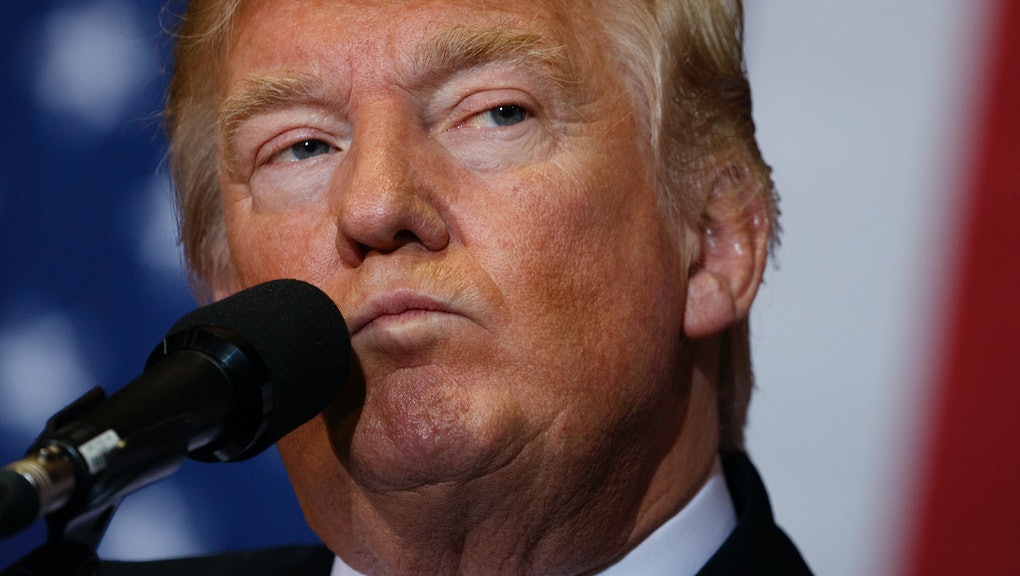 Donald Trump's Twitter privileges have been taken away, apparently to keep a bad situation from becoming worse.

On Sunday, the New York Times published a detailed report on the final days of the Trump campaign, spotlighting the ever-widening gap between the Republican candidate's boorish public persona and his current mood. The nominee is allegedly quite freaked out about opponent Hillary Clinton's lead and is struggling to reconcile his jangly nerves with his "bottomless need for attention," according to the Times.

And so his aides "have finally wrestled away" Trump's Twitter account, in the Times' words, apparently acknowledging that his interior anxiety could translate to some pretty bad tweets. Certainly, it's happened before.

According to Deadspin, this was the last tweet Trump sent out himself:

According to the Times, Trump has been replaced by a rotating cast of his now-"unfireable" staffers, at least online. While he is still allowed to consult on the content of his tweets, the ability to hit send has been snatched away from him, for his own good.

Looking at Trump's Twitter feed since the Thursday morning regime change, a change in tone is immediately obvious — @realDonaldTrump is no longer disparaging House Speaker Paul Ryan, and even his Crooked Hillary rhetoric has cooled somewhat. In place of the pointed, bullying rants are rally announcements and shared articles, with some caps lock thrown in to up the authenticity.

Comic though the news may be, it's probably also smart: This is, recall, a candidate whose camp feared he'd announce his running mate on Twitter before telling his staff. And with two days left before the election, avoiding embarrassing social media moments is a must.

The Trump campaign is slouching through a surprise-ridden final stretch, in which aides seem as feckless as the candidate himself, if the Times piece is anything to go on. In the kerfuffle that ensued after FBI Director James Comey announced his renewed — and, it turns out, pointless — interest in Clinton's private email server, Trump's aides immediately "agonized over which words to feed into the teleprompter." The situation become so chaotic that it took some time before chief campaign executive Stephen Bannon noticed the smoke issuing from his pant leg.

So, according to the Times, the Trump campaign has become so tumultuous in its eleventh hour that it is literally going up in smoke.