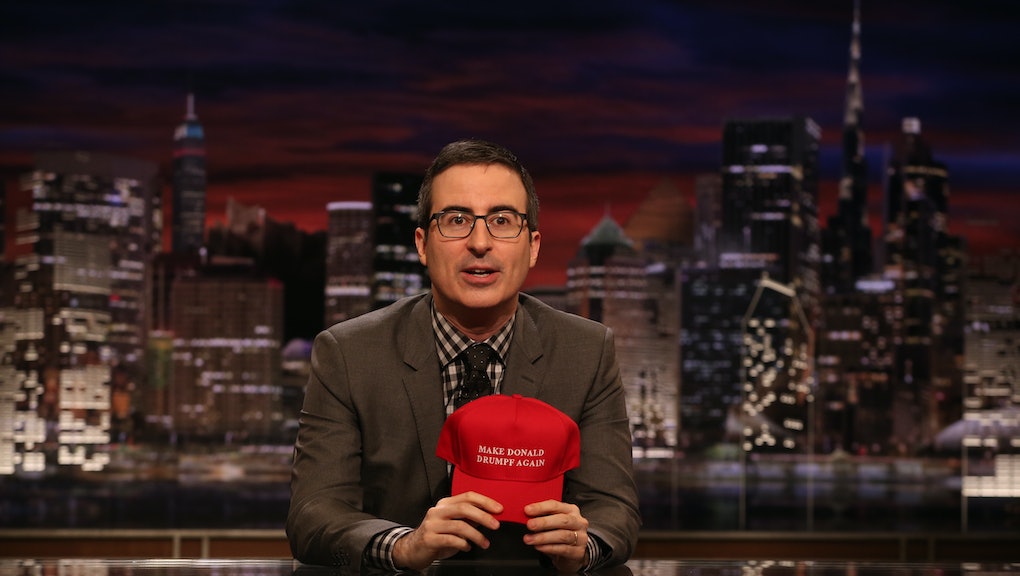 John Oliver blames himself for Trump’s candidacy, urges people to go out and vote

The alternative solution Oliver presents for Americans is pretty simple: Go out and vote. He admits that he can't help anybody watching the show who's still, somehow, an undecided voter. What's even scarier is that Trump's slowly risen in the polls since the FBI reopened their investigation into Clinton's email (which, on Sunday, they have since dropped and cleared her of any charges).

"There is a lot to consider on Tuesday and then, barring recounts, this nightmare of a campaign will be over — which is good, because this election hasn't so much appealed to our better angels as it has groped our better angels, mocked their weight, and called them 'sixes at best,'" he said. "We are at a point where this man has a genuine shot at the presidency, despite having blown up a political party, undermined confidence in our electoral system, declared open season on journalists and unleashed a river of racism and misogyny. Also, and I feel like we've lost sight of this: He has really stupid hair."

To really harp on that idea that anything could happen on Tuesday — including a Trump victory — Oliver points to himself joking about the potential of a Trump candidacy back when the comedian was on The Daily Show in 2013. He didn't just support it; he jokingly suggested he'd write a check to his campaign.

Oliver also said the Chicago Cubs would never win a World Series, so by his own admission, he's an "idiot." But he uses it as a good justification for people go get to the polls on Tuesday.

"That clearly shows, no outcome is certain," Oliver concludes. "So if you are thinking you don't have to show up on Tuesday because there is no way the impossible could happen, take it from somebody who has learned from painful experience: You are wrong about that."

Watch the segment from Sunday's episode of Last Week Tonight below: