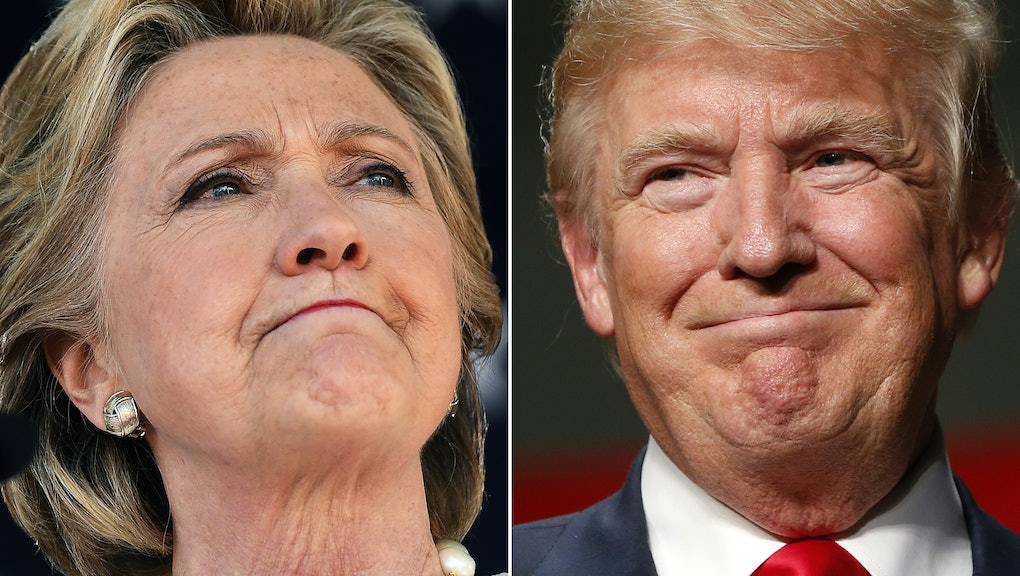 Presidential Odds: The likelihood of a Donald Trump or Hillary Clinton presidency

With less than 24 hours before the polls open, pundits and pollsters are whipping themselves into a frenzy in an effort to predict who will win the presidency: Republican Donald Trump or Democrat Hillary Clinton?

FiveThirtyEight — run by all-star statistician Nate Silver — predicts Clinton has a 65% chance of winning, with Trump at 35%. The site also predicts Clinton will win 292.4 electoral votes (a candidate needs 270 to win) while Trump will win 244.8.

As far as the popular vote is concerned, FiveThirtyEight forecast Clinton will win 48.5%, with Trump at 45.6%.

A number of pundits have used the "firewall" argument to buttress their predictions — this theory suggests Clinton will win Colorado, Pennsylvania, Michigan, New Hampshire, Virginia and Wisconsin, all of which would create a blue firewall for Democrats. Winning these states in conjunction with the staunchly Democratic ones would allow her to win the 270 electoral votes she needs.

However, in the weeks running up to the election, a threat emerged of losing three of the "firewall" states: Pennsylvania, Michigan and New Hampshire. Polling in the first two of these states showed Clinton's lead diminishing, and some polls in New Hampshire even showed Trump ahead. However, New Hampshire has been fluctuating, and the latest polls show Clinton is regaining her lead.

RealClearPolitics, which provides an aggregate of most major national polls, shows Clinton with a slight lead. The average of the 12 polls featured gives Clinton a 44.8% chance of winning and Trump 42.1%. She is also leading in 11 of the 12 polls, with the exception of the IBD/TIPP Tracking Poll, which gives Trump a 43% chance of victory compared to Clinton's 41%.

Despite the majority of polls showing Clinton with a small lead, it is still conceivable Trump could win the White House if enough of the states in flux, such as Michigan and New Hampshire, end up swaying Republican.