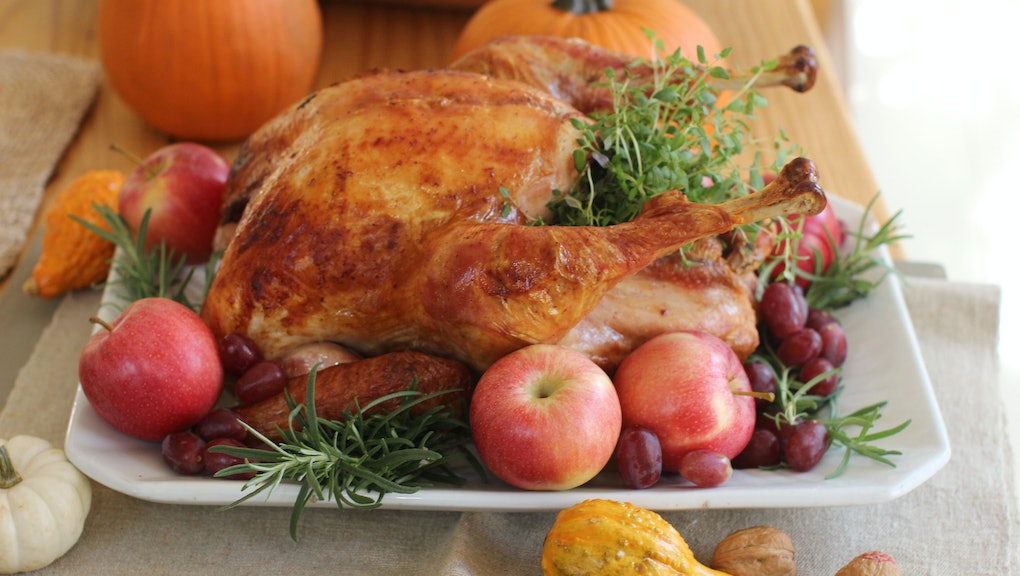 How to carve a turkey: Your basic guide to cutting the Thanksgiving bird

So you've made your first turkey. Great work! It looks fantastic, smells even better and everyone is ready to dig in.

But how do you actually get to the meat? Well first things first: Before carving, the turkey should rest outside the oven for at least thirty minutes, to help the juices resettle in the meat and to prevent you from scalding your hands on an extremely hot roasted bird.

To carve your turkey once cooled, you'll need:

Intuitively following the lines of the turkey's carcass will help you know where to slice, but Howcast has an easy step-by-step tutorial to make sure you get that carving right and secure your legacy as the Michelangelo of Thanksgiving poultry. Follow the steps below and impress your guests with one heck of a bird.

Step 1: Put your turkey on a cutting board, breast side up and pull the leg away from the body

You'll cut through the turkey's skin, meat and joint to separate it from the turkey. Repeat with the other leg. This step removes the drumstick and the thigh, i.e. most of the dark meat on the turkey.

Step 2: Separate the drumstick and the thigh

Once separated, put the drumsticks on the serving tray and cut slices of thigh meat away from the thigh bone, cutting against the grain of the meat and about half an inch thick. If the meat starts shredding, you're doing it wrong.

Step 3: Pull the wings away from the body and cut them off

See how this works? You're just removing all the extremities to get to the main part of the bird: the breast. After removing both wings, plate them with the drumsticks and thigh meat to somewhat resemble where they would be on a whole bird. If you've ever seen a Thanksgiving movie you know how this is supposed to look.

Step 4: Make your first slice into the breast meat

Cut along the left or right of the breast bone to remove half of the meat and repeat on the other side. Put both breast halves skin side up on your cutting board.

Step 5: Cut the breast meat into slices about a quarter of an inch thick

Cut against the grain again for this part. Note: It's okay to eat the bits the fall off!

Step 6: Plate your turkey and serve with your favorite gravy

Step 7: Get excited for leftovers!