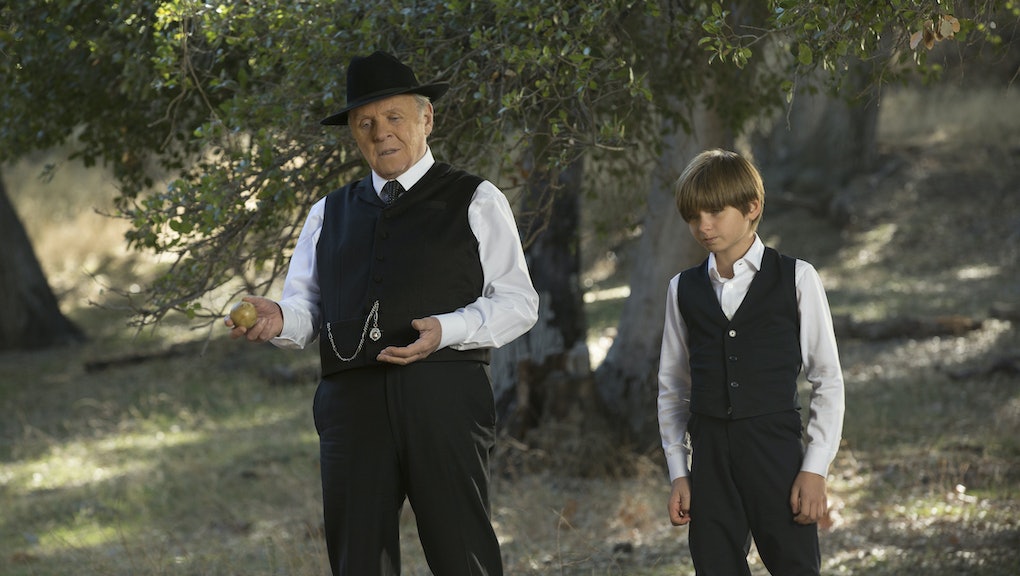 If Westworld is the heir apparent to the similarly mystifying Lost, is the HBO series' supposed behind-the-scenes orchestrator Arnold the Smoke Monster equivalent? There are a lot of questions about Westworld, to be sure — Vulture has dedicated a "biggest questions" after each episode that's always warranted.

But perhaps none bear more intrigue than Arnold, who, if we're to believe the delightfully scheming Ford (Anthony Hopkins), was the co-creator of the park alongside Ford. But Arnold's aspirations for the park were a touch different than Ford's: He wanted the robotic Hosts to achieve a human-like level of consciousness. Ultimately, per Ford's intimation, Arnold killed himself in the park, and his involvement at Westworld was subsequently deleted from its history.

However, as any Westworld viewer is keenly aware, Arnold could still be shaping the park to his whims. Dolores and some of the other Hosts are hearing voices in their heads — could it be Arnold speaking to his creations? — and are being persuaded to abandon their predetermined park narratives. Whatever the ultimate goal of the Hosts rebellion, which seems inevitable, ends up becoming, Arnold is ostensibly involved even if we haven't seen him.

Or have we been with Arnold the whole time?

One of the prevailing theories for Westworld is that Bernard (Jeffrey Wright) isn't what he seems, the general consensus being he's secretly a Host (even if he doesn't know he is). But an extension of this theory is the idea that Bernard is somehow the embodiment of Arnold, perhaps in Host form. The episode only adds fuel to the fire that something's up with him.

Take Bernard's stroll into the park to investigate unregistered Hosts in one quadrant. When he enters a cottage in the middle of the forest he sees a family: a man, a woman and two sons. He asks, rather astoundingly, if this man happens to be Arnold. He isn't, but instead the entire family is a robotic portrayal of Ford's family built by Arnold.

One of the boys happens to be a young Ford, and the man is his father.

But why would Bernard assume that the man was Arnold? Curiosity for one, but the photograph Ford shared of he and Arnold back in episode three included the Host version of his father.

Going back to the Bernard is a Host theory, we know that the Hosts are only able to see what they're meant to see, and what they can process. That's why Dolores (Evan Rachel Wood) has a blank expression to discovering a photo of a woman at Times Square in the show's pilot, and why Maeve (Thandie Newton) temporarily shuts down after learning about her own existence in episode six.

Perhaps there's something from that old photo that Bernard's not meant to see. As redditor ndotny explains, the photo of Ford and his Host father is off-centered — there's a lot of blank space to the right of the Host. If we're looking at the photo from Bernard's point-of-view, it could mean he's actually in the photo on the far-right. He just can't process what he's seeing.

At the very least, this seems to confirm that we still haven't seen what Arnold actually looks like (unless he's Ford's father, which is honestly too much to bear). Arnold could still be alive in the park; Arnold could secretly be a Host; Bernard could be Arnold; and Arnold could've been the person who snatched Elsie (Shannon Woodward) at the end of the episode.

Westworld is still offering more questions than answers — and Arnold is certainly at the center of many theories. But if the series can be this engaging every week, we're all for it, and can't wait until Sunday.