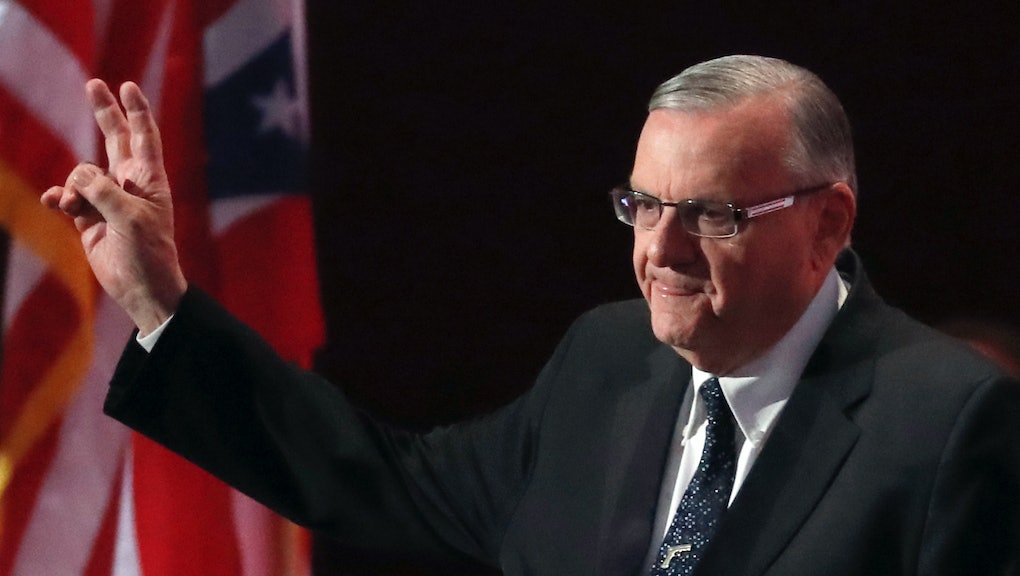 What to know about Arizona Sheriff Joe Arpaio: Immigration enforcement record and polls

According to a report from the Arizona Republic, deputies working under Arpaio had "continued to arrest and deliver undocumented immigrants to federal authorities when there were no state charges against them, long after [U.S. District Court Judge G. Murray] Snow banned the practice."

If convicted, Arpaio could spend up to six months in jail, according to the Los Angeles Times — but voters could still re-elect him for a seventh term on Tuesday.

Following news of Arpaio's criminal charges, the New York Times editorial board took stock of the Arizona sheriff's long history of dubious practices, recalling "years of racial profiling, the tormenting of immigrants and Latinos, the physical mistreatment and humiliation of inmates and defendants [and] the beatings and neglect and deaths behind bars."

This excerpt of what the Times ed board calls Arpaio's "rap sheet" provides just a snapshot of Arpaio's treatment of people of color in Maricopa County. Arpaio has made it clear that he's happy to arrest and imprison as many undocumented immigrants as possible. In 2011, he said in an MSNBC interview that he would even go out of his way to make jail accommodations for "illegal aliens."

"I put up tents, Korean war tents in 1993," Arpaio said at the time. "Seventeen years we've been doing it. I just extended an area of the tents for those that would have been arrested under that new law, but that's on hold, but I still have 200 illegal aliens in our tents anyway doing their time. So, I have plenty of room for any cop that wants to arrest people."

Arpaio's officers seemed to make good on that promise when, a year later, they arrested a 6-year-old girl suspected to be an undocumented immigrant and turned her over to Immigration and Customs Enforcement.

Is Arpaio likely to be re-elected on Tuesday?

At the end of October, Arpaio was losing to opponent Paul Penzone by 15 points as news of his criminal charges broke. And Penzone supporters are as determined as ever to end Arpaio's 23-year reign.

According to the Arizona Republic, the Bazta Arpaio campaign, a Latino-led organization against Arpaio, is partnering with local transportation companies to help bring voters to the polls on Tuesday. They have also set up a hotline for people to call if they need a ride, or need someone to deliver their ballot to a polling site. The services are available to anyone, no matter how they vote.

"I know all of the damage he's done," Daphne Cervantes, a high school student in Maricopa County told ThinkProgress. "It's time we show him that we're not going to stand for it any longer. ... We, the people that he's targeted, are not going to let him do it anymore."