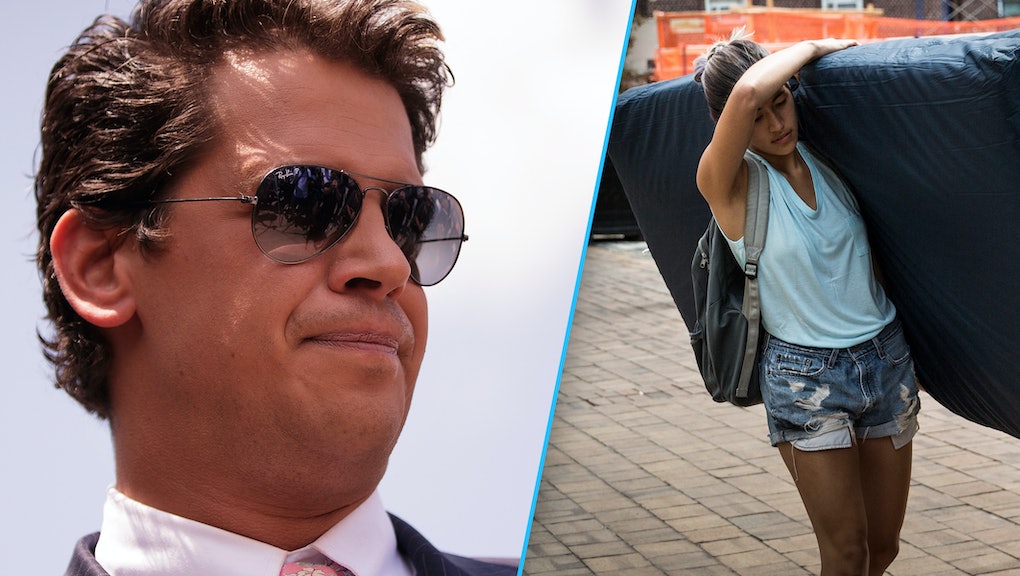 Banned from Twitter, Milo Yiannopoulos is taking his trolling on the road: On Monday, the Breitbart editor told Politico he'd be dressing up as sexual assault survivor and advocate Emma Sulkowicz during an appearance at her alma mater next week, one stop on his months-long "Dangerous Faggot" speaking tour.

"I can't think of a more perfect outfit for Columbia than a mattress and a fake rape claim," Yiannopoulos told Politico in an email. "See you soon!"

Sulkowicz, who graduated from Columbia University in 2015, spent her senior year lugging around a 50-pound mattress as part of her thesis project, entitled "Carry That Weight." The performance art piece was her response to what she called the school's mishandling of a rape allegation she'd made against another student. She resolved to carry the mattress until the student was expelled or left.

Yiannopolous does not believe in rape culture, thus his own subtle protest, which will be given a platform thanks to the efforts of the Columbia University College Republicans group. His speech is scheduled for Nov. 16, open only to Columbia University ID-holders. It's sold out.

Several other schools, including nearby New York University, have cancelled Yiannopoulos' appearances after the alt-right darling sparked unruly protests on many of the college campuses that have hosted him.

On the long list of people and groups Yiannopoulos has bullied are actress Leslie Jones, who temporarily left Twitter in July following a targeted campaign of racial harassment launched by Yiannopoulos and his internet minions. As a result, Twitter booted him from the platform, an action his followers did not take well.

Yiannopoulos openly detests feminism in all its forms and has architected a special grant to restore white male privilege to its former glory, "available to white men who wish to pursue their post-secondary education on equal footing with their female, queer and ethnic minority classmates." He has referred to feminism as "cancer."

It should come as no surprise, then, that he's no friend to Sulkowicz in particular: In a June 2015 review of Sulkowicz's video, Ceci N'est Pas un Viol (This Is Not a Rape) — a commentary on consent — Yiannopoulos referred to "Carry That Weight" as Sulkowicz's "previous psychiatric outburst" and rolled his eyes at the "absurdities of Title IX legislation." Title IX, to be clear, exists to counteract sex-based discrimination in education. Lately, it's been invoked mostly in the context of sexual violence complaints on college campuses, after schools bungle, say, a student's sexual assault report.

But for her part, Sulkowicz was unfazed by the news that Yiannopolous would be channeling her for his Columbia stop.

"He is dressing in drag as me?" she said in an email to Politico. "And carrying a mattress? He'll get a sense of how it feels. That's fantastic. I hope he carries a real one, and doesn't cop out with an air mattress."