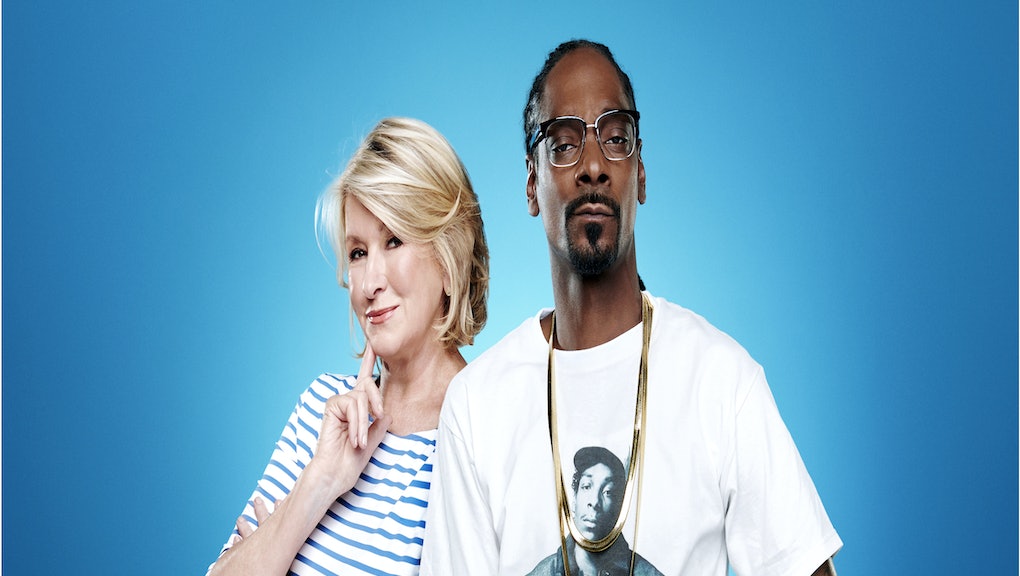 Q: What do you get when Martha Stewart, Snoop Dogg, Wiz Khalifa and Seth Rogen host a cooking show?

A: Tons of weed references, a couple of cute dance moves and too many racist jokes that come off as forced.

VH1's Martha and Snoop's Potluck Dinner Party, which premiered Monday at 10 p.m. Eastern, held a lot of promise for its stars' quirky friendship and entertainment possibilities. And yet, the pilot episode fell flat, relying too much on cheap tropes. Instead of focusing on how the pair defines #friendshipgoals and pleasantly bewilders their fans, the show centered mostly on Martha and Snoop Dogg's differences.

In episode one, the "King of Kush" and the "Queen of Cuisine" compete in a fried chicken competition. (Seriously? Fried chicken of all things?) Though Martha is well-versed in all things culinary, Snoop announces his confidence in facing off against the lifestyle empress, insisting he was raised on fried chicken.

"My pacifier was a drumstick," he says, which gets laughs from the show's live studio audience, and seemingly sets the tone for the rest of the show.

It's funny! It's light-hearted! The premier definitely offers some ripe, witty moments. Seth Rogen notices he's the only person on stage not wearing a necklace, so he pops on one  of Wiz Khalifa's chains — the two serve as the first episode's celebrity guests and sous chefs — and several other cute instances, like Martha and Snoop's promotional body rolls, make the episode joyous and stand out from a typical cooking show.

But, it's all downhill when things start to get competitive. Martha adopts a kind-of-mean streak (and not in that #NastyWoman kind of way), telling her assistant Wiz Khalifa that she has to win because she "can't lose to the hood." Even in this pre-recorded hourlong episode, the moment is uncomfortable; there's a noticeable pause from the other hosts as well as the studio audience. "I'm from the hood too, Martha," Wiz Khalifa retorts after absorbing it all.

As a viewer, you might consider Martha's comment a one-time gaffe. Had this reference to "the hood" been the only mention, it could be shrugged off. Sadly, later on in the show, Ice Cube shows up — because, why not? — and emphasizes the differences between the competitors, deeming Snoop's side of the kitchen the "hood," and Martha's "Hollywood."

It's this well-timed and well-rhymed line that alludes to the possibility that the show's focus on class is both intentional and scripted. Later, while coating a piece of chicken in a buttermilk mixture, Martha says to Snoop, "If you took a buttermilk bath, you'd be whiter," as if she'd been told by producers to play some race card. Professional comedian Rogen says, "I'm not touching that one," probably because the joke is flat out bad. If the racial play was, in fact, encouraged, it's a real bummer, because Martha and Snoop are celebrated for the love they have for each other, and milking that aspect of their relationship would have made the pilot more of an indisputable success.

In November 2008, the rapper appeared on Martha's cooking show to compare mashed potato recipes. Back then, Martha professed her admiration for Snoop's vocabulary, and it was Snoop who mentioned the "hood," and his preference for black pepper. It was much less uncomfortable coming out of his mouth.

The relationship seems sweet. And in a September interview with Rolling Stone, Snoop said he's never met anyone quite like Martha. "When we come together, it's a natural combination of love, peace and harmony."

It would have been a delight to see that peace and harmony on the pair's cooking show debut. Instead, the premiere is lazy at best, and feeds on the juice from low-hanging comedic fruit that has served less-smart comedy for far too long.