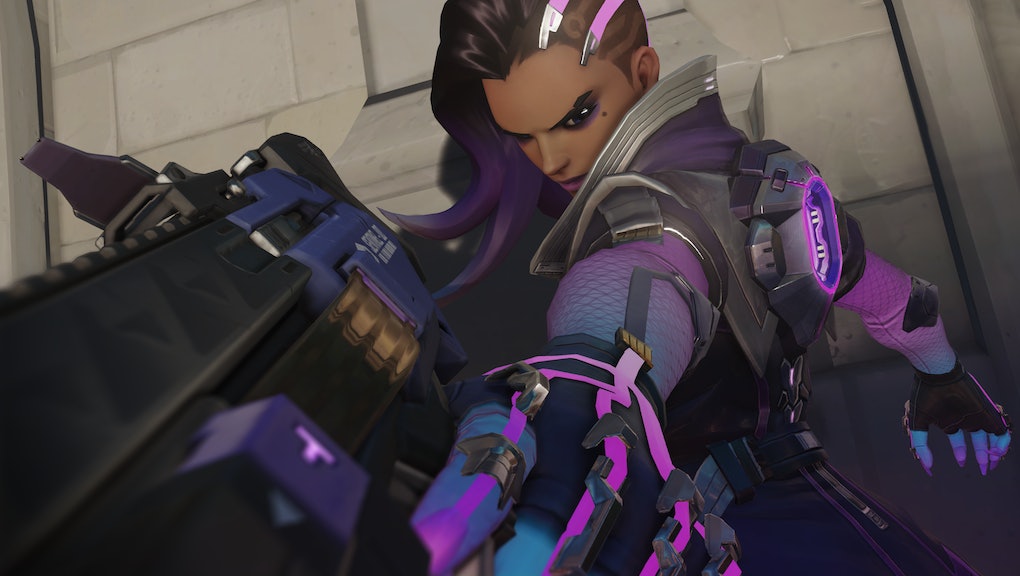 Many Overwatch players are already intimately familiar with its most recently announced character — the stealthy, offensive hacker Sombra — despite the fact she still has yet to be released.

That's because a dedicated subset of Overwatch fans known as the Game Detectives were following an alternate reality game that Blizzard was orchestrating in the months leading up to Sombra's official reveal. In this ARG, Blizzard would sprinkle breadcrumb trails around the web for players to find, all of which was structured to look like Sombra herself had left the clues there.

One of Sombra's emotes — a short animation the character can perform on command — called "Amused," references a dead-end ARG theory about a so-called "sky code" that was so misguided that Blizzard had to step in and set players on the right course again. In the emote, Sombra conjures an image of this sky code, chuckling to herself and shaking her head, as if to say, "Wow, remember that sky code theory? Yikes."

When Overwatch director Jeff Kaplan was asked about an ARG theory that involved some kind of compass assembled from various frames of other YouTube videos, he said, "That sounds like deep CIA level stuff. Way above our heads."

Some ARG participants interpreted that remark as a clue in and of itself, which sent them looking skyward — literally above their heads — within each of Overwatch's maps for clues.

Someone took a screenshot of a section of sky on the Dorado map, that, when manipulated in a certain way, seemed to reveal some kind of barcode much like the one at the end of the YouTube video that revealed Ana.

Players spent days trying to decrypt the blips and bars of this so-called "sky code" to no avail — though one person managed to convert the image into a song, which they were convinced was the same song that plays on the Dorado map itself.

It turns out this was all just a big dead end that didn't lead anywhere. Blizzard eventually released an image on their website of the Dorado map that, when decoded, said, "Why are you looking at the sky? The answer isn't over your heads, it's behind you. Sometimes, you need to analyze your previous achievements."

Basically, it was Blizzard saying, "Holy shit, the sky code theory isn't a thing. Stop trying to make it a thing."

It's important to note here that Blizzard's clues in the ARG were always absurdly obtuse — in one case, a blip of static at the end of a YouTube video was decrypted to reveal a QR code that revealed a message from Sombra — so to think that Blizzard could have hidden a clue in the sky of one of its maps isn't too out there.

Still, it's pretty great that the ARG's most infamous misstep is preserved forever in one of Sombra's emotes. The sky code makes a second appearance in one of her sprays, too:

All of Sombra's skins, emotes, victory poses, highlight intros and sprays in Overwatch

And that's just two of her unlockable items! Check out the YouTube video embedded below for a full look at all of the goodies you can unlock for Sombra in Overwatch.

When will Sombra be released?

Owners of Overwatch on PC are currently putting Sombra through her paces on the public test region, where changes to the game are tested before being fully implemented, but you can probably expect Sombra to be officially released sometime in the next week or two.

Until then, be sure to check out the secret quirks of Sombra's abilities to make sure you're ready to dominate the competition once she's officially released.