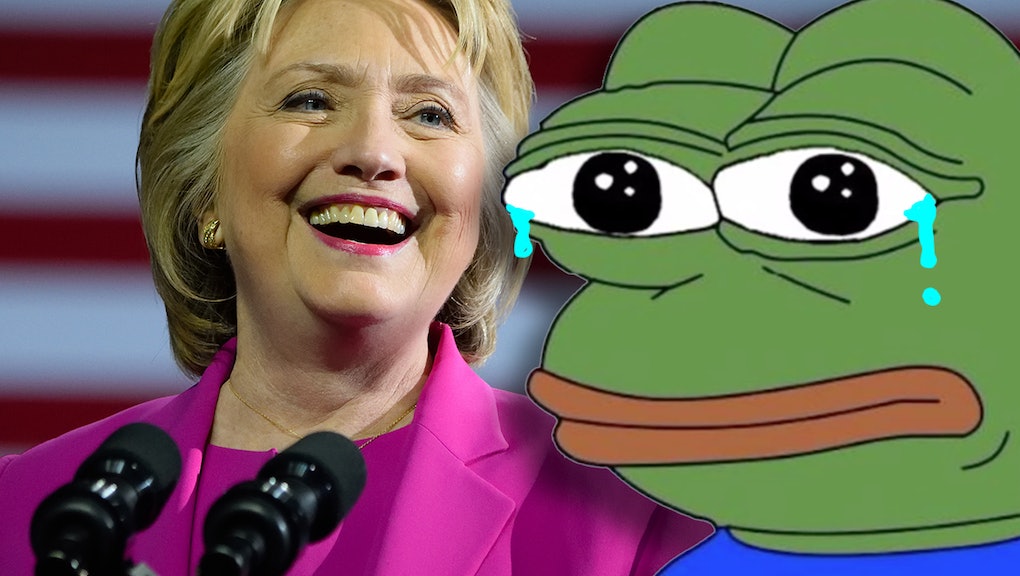 Throughout Election Day, Donald Trump's most rabid fans have been flailing in presumed defeat. On right-wing-friendly online hangout 4chan, something remarkable happened: The group of bullies who spewed violent, racist threats in Trump's name showed something like vulnerability, weakness, shame and regret.

It was all the more entertaining for the sheer irony: The army of trolls who fought for traditional American values admitted they failed to make America great again. Sad!

Even more ironic, many of them had an embarrassing confession to make: The same trolls who railed against the "rigged" system of American democracy weren't very good at this whole voting thing, by their own admission.

One user admitted they accidentally voted for Hillary Clinton but didn't want to look stupid asking for help, so they submitted their ballot with a Clinton vote — then whined about it on 4chan with a crying Pepe the Frog cartoon.

Multiple users said they showed up to the polls expecting a ballot and were shocked when they learned they had to register to vote in advance.

One 4chan user, a self-described 23-year-old virgin, said they were "embarrassed" and regretted his support for Trump because they were afraid they'd never get laid. "I wore my MAGA hat today and was getting stares and snickers from people (mostly girls my age)," they said.

Others expressed their sadness through memes.

As the day went on, users linked to fake maps that showed a glimmer of hope for a Trump victory, noted BuzzFeed's Joe Bernstein.

4chan, the anarchic web community that's been home to internet trolls over the past decade, has hosted the pulsating orb of conservative rebellion and white nationalism called the alternative right since it first latched onto Trump. This year, 4chan trolls have crafted several campaigns to sabotage Clinton voters and harass black people, Jews, women and other marginalized groups, all in the name of obliterating a culture of "political correctness."

On Election Day, however, their once-gleeful Pepe the Frog avatars wept.

Will the eventual outcome lead to a kindler, gentler community? It's doubtful. As their world appeared to be falling apart, supporters on 4chan fantasized (jokingly?) about taking back their country in a violent coup.