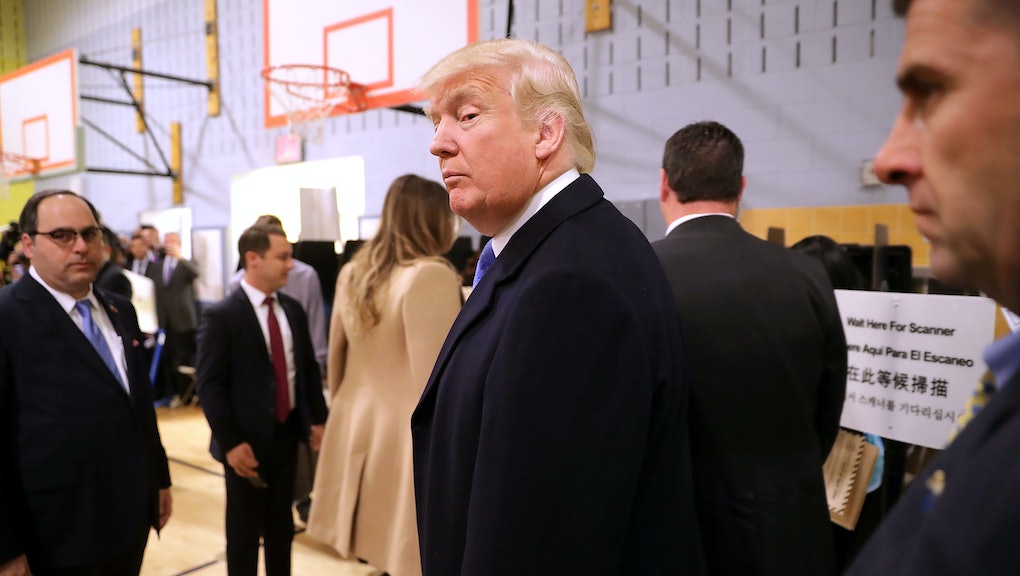 Can Trump win the presidency? Here are his 3 (questionable) paths to victory

Polls and projections alike give Hillary Clinton a clear edge on Election Day, while Donald Trump has only a few paths to an Electoral College victory — and all of them are questionable.

As election results pour in Tuesday night, Mic will monitor the wins and losses for Clinton and Trump to determine how many routes, if any, Trump has left to victory.

The Republican presidential nominee's easiest path to the White House runs through the southeastern and the southwestern U.S. With victories in Arizona, Georgia and North Carolina — states Mitt Romney won in 2012 — along with Florida and Nevada, Trump can get close to victory. Polls before election day showed a tight race in those states, though some have argued early voting among Hispanics in Nevada put the battleground out of reach for Trump.

To put him over the top in this scenario, Trump would also need victories in Iowa, Ohio, New Hampshire — states where he was running competitively — along with all 5 of Nebraska's electoral votes and 1 from Maine.

A shift in the Rust Belt

The above scenario was a key challenge for Trump from the start of his campaign. With a loss in one or more of the states above, Trump must pick up electoral votes elsewhere to make up for that loss of votes. He has recently hunted for that support in traditionally Democratic Rust Belt states like Pennsylvania and Michigan.

Trump's argument for this scenario seems to make sense, even if polls fail to back it up. By attracting the support of working class white voters in states that are not as diverse as Florida or Nevada, Trump could flip states that have not supported Republicans since the 1980s.

This could go a few ways. With Clinton victories in Nevada and North Carolina, Trump could make up ground by turning Pennsylvania and Michigan red and winning Arizona, Florida, Iowa and Ohio.

The reality is Trump victories in Pennsylvania or Michigan are unlikely. While polls there have tightened, they are historically blue states that have not supported a Republican since George H.W. Bush in 1988. There is precedent for a Republican to go down the rabbit hole and fail to emerge in these states: Four years ago, Romney's campaign felt he was within striking distance of victory in Michigan. He lost there by nearly 10 points.

All eyes on North Carolina

As in the above scenario, this requires something unprecedented: A Trump win in a longtime Democratic stronghold, like Michigan or Pennsylvania. (For this exercise, we'll turn Pennsylvania red as polls were slightly tighter there than Michigan going into the election.) If that happens, and Trump manages victories in aforementioned key states, the map quickly gets strange.

Clinton could win Nevada (and even New Hampshire, though we gave that to Trump in the map below) but lose if she loses a large blue Rust Belt state, then cedes Florida and Ohio to Trump and does not win North Carolina. From Trump's perspective, a win in one of the large midwestern states (beyond Iowa and Ohio, which are must-wins for him in every scenario) could offset a few small losses elsewhere.

In this scenario, all eyes would turn to North Carolina.

While these paths to victory are varying degrees of unlikely for Trump, what is more likely is a Trump loss driven by the extremely challenging map he faces. The maps below show that a loss in either Florida, North Carolina or Ohio, or a combination of Nevada and New Hampshire, would spell game over for Trump, even with a previously discussed unlikely win in Michigan or Pennsylvania.

Trump will need a whole lot of luck, which polls and projections do not suggest is headed his way, to pull out a win.