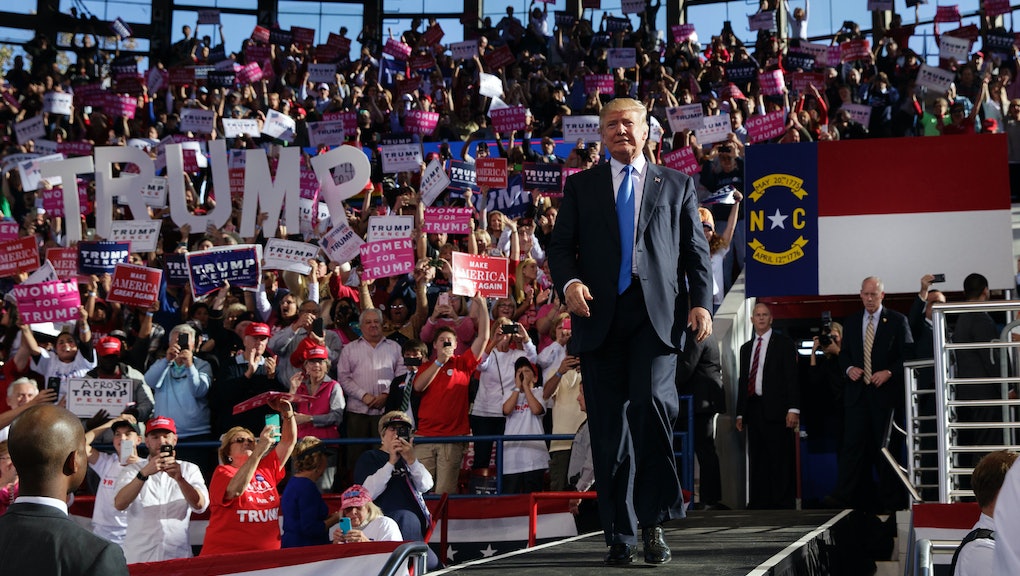 Only white people could have prevented a Donald Trump presidency

The white person I knew best growing up, my father, set a standard few others have met. Unlike many white Americans, nobody had to convince him racism was real. He'd lost family to it. His own father disowned him in 1979 for marrying my black mother.

My grandfather wrote a letter to my dad saying that marrying her would keep him from moving ahead in society, my mom told me. "How he wouldn't move up the corporate ladder," she said, "how he wouldn't be able to move to a good neighborhood."

By the time he died in February 2015, my dad was more intimately familiar with the costs of white supremacy than any white person I've met. He died not having seen his father in 36 years. He couldn't even convince my grandfather to meet his black grandchildren — my sister and me — through the day that cancer killed him.

I've thought about my dad a lot during this election. Four months after he died, Donald Trump announced his candidacy for president and launched an 18-month campaign defined primarily by its racism. The Republican nominee singled out Muslims and Mexicans as safety threats so serious as to warrant locking them out of the United States entirely. He vowed to deport millions of undocumented immigrants. His pitch to black voters entailed deploying police to prowl their neighborhoods and subject them to random and unconstitutional body searches.

According to the Washington Post in 2014, 75%of white Americans have no friends of color.

Now, he is our next president. This is so largely because of a platform that represents so much of what my dad stood against. Where the GOP nominee and his supporters have proffered irrational fears and white ethno-nationalism, my father responded to getting disowned by burying his mind and heart in racial justice work. He founded anti-racism organizations at his church and in his communities. He read and wrote obsessively on the topic and filled our home with ceiling-high stacks of his books: academic works, histories, novels, essays.

Most importantly, my dad did his work in predominantly white spaces. He was far from perfect — ask my mom — but he worked tirelessly on himself and his people. This was not always convenient. We did not live in a white neighborhood, so my father criss-crossed Los Angeles County on a near-weekly basis to be where he felt he was needed the most. He put into practice his understanding that if white supremacy were to be defeated, it needed to be reckoned with at its source: white people.

It's an undervalued part of the work — and our only hope if we want to emerge from a Donald Trump presidency a more tolerant and equitable nation. The hordes of angry and frightened whites the president elect has rallied to his cause — nine out of every 10 Trump supporters are white, and according to the last pre-election polls, and Trump led Clinton among whites by 20 percentage points going into Tuesday — signify that white people as a whole have largely failed to confront the racism festering in their own communities.

To this day I marvel at how many well-meaning white Americans will parachute into remote villages and slums in Africa, Asia and South America to do charity work, but won't set up anti-racism projects in places like Logan County, West Virginia, where at least 96% of residents are white and most believe Trump is all that stands between them and racial oblivion. It's hard to fathom how many white-run think tanks, foundations and charity organizations exist in the U.S., but how few focus specifically on deeply studying white racism and eradicating it.

This is not work that people of color can shoulder alone. White spaces are isolated by design. According to the Washington Post in 2014, 75% of white Americans have no friends of color. We're not going to get past a nation where between 40 and 50% of Trump's supporters think black people are lazier and more violent than whites and nearly 70% dislike Muslims if anti-racist white people don't penetrate the communities from where this thinking originates.

It will not always be a comfortable process. At dinner recently, a white friend told me about a community group that gets together in Asheville, North Carolina, regularly to talk about racism. I don't know what the group is called. I do know Asheville is 76% white, and that the group mirrors those demographics.

"It doesn't seem like the group is actually fixing anything," she said skeptically. "It's such an example of white privilege."

I disagreed. I understand that the optics of white people talking with other like-minded white people about how not-racist they are may seem self-indulgent. But there's real value to be found here. We complain about the siloed echo chamber that is American political discourse, but we ignore how starkly racialized that echo chamber still is, and how easily we might harness it for good if only the right people were to make their voices heard there.

We're not going to get past a nation where between 40 and 50% of Trump's supporters think black people are lazier and more violent than whites and nearly 70% dislike Muslims if anti-racist white people don't penetrate the communities from where this thinking originates.

Change won't happen by itself, and it's far from guaranteed otherwise. As dusk sets in over our nation's first black presidency, it's become clear that the white America my dad worked so hard to guide into reckoning with its own bigotry has not suddenly become less racist, as some thought. Instead, it has spent the eight years since President Barack Obama was elected huddled in segregated neighborhoods with like-minded whites, railing to one another against the erosion of their power.

To say Trump struck a nerve with them is selling him short. The notion that white Americans are losing ground to people of color, that a lost and elusive "greatness" is owed them, is the most potent and enduring myth in American culture — from Reconstruction through today.

If you're not scared of this, you should be. My dad certainly was. For years, my father wrote in journals, and for one of his final entries before cancer shut down his brain, he wrote a sobering passage assessing his life and work.

"I thought I'd be able to change people's lives with my story combined with the stories of others and the 'literature' that has accrued over the years," he wrote, "but now I know better. The only life I can change is mine."

I want to prove him wrong. But Tuesday night's election revealed him to be more right than perhaps even he could've imagined. As long as white America remains so easily susceptible to the charms of a racist demagogue like Donald Trump, what happened last night may just be the beginning of something far worse. Dark times are ahead either way. And white folks have work to do.