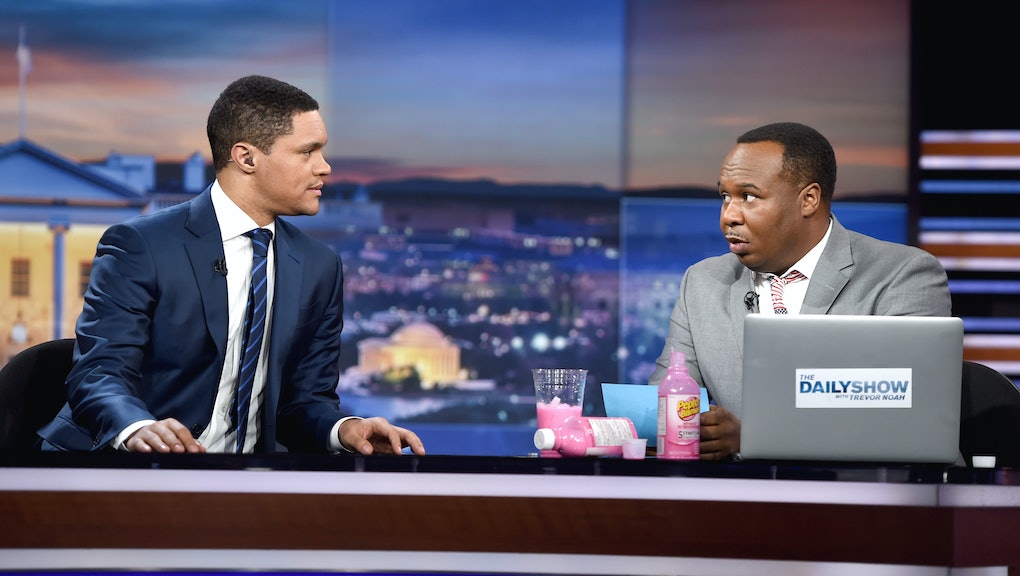 NEW YORK — An oft-promoted tagline for The Daily Show's coverage ahead of the 2016 presidential election was made in jest: "The Series Finale of America." But looking at the slogan in retrospect — on the eve of the show's live election special with Donald Trump inching closer to the presidency — was equal parts sobering and terrifying.

The live episode was to begin at 11 p.m. Eastern, but the audience was seated much earlier, glued to a plethora of television screens offering up-to-date results as they came in. Trump had taken the battleground state of Ohio; he was soon to be confirmed for Florida. By the time host Trevor Noah came out to greet the audience, minutes before air, an aura of uncertainty permeated in the studio.

"We're in this together," Noah told the audience. "This is the first time I've been nervous all year ... I won't hold it against anybody if they don't laugh."

Noah opened the show in a similarly disquieted fashion, akin to The Daily Show's dystopian Halloween special that envisioned what a Trump presidency would feel like four years down the road. The difference: The joke was slowly turning into a reality.

"This is it: The end of the presidential race, and it feels like the end of the world," he said. "I genuinely don't understand how America can be this disorganized or this hateful — I don't know which one it is."

Correspondent Roy Wood Jr. was at Noah's side throughout the night, offering (mostly bad) state results as they came in, with a bottle of Pepto Bismol as a fitting election night libation. Pre-recorded segments from the campaign trail for Jordan Klepper and Desi Lydic didn't offer any respites, either.

Both correspondents had interviewed Trump supporters — at the time, surely a way to get a final, apprehensive laugh at some of the worst elements of his voter base. But watching it in real-time, knowing he was now a clear frontrunner over Hillary Clinton, there was little humor in knowing their beliefs were being validated in a presidential election.

"Puerto Ricans and Hispanics voting in there several times," a male Trump supporter told Lydic, when asked about what he'd look for while monitoring polls on Election Day. "They're not immigrants; they're invaders. They're Hispanic, Roman-Catholic invaders ... And it's not just them, it's going to be others that are going to do it. Hispanics, blacks, left-wing Socialists, Communists, pro-homosexual, pro-black, anti-white, gun-grabbing, pro-Muslim — all these different factions."

Between Noah's interviews with guests, Wood provided more updates from the election — though at times, they felt a bit dated compared to the results being streamlined to the phones from members of the audience. (For example, Florida was called well in advance of Wood's announcement.)

At tapings for The Daily Show and similar late-night programs, having your phone out — even during a commercial break — isn't allowed. However, many in the studio routinely checked their phones. It was oddly paradoxical: People came here to watch the show and have a laugh, but as the results came in, we wanted to be informed of a foreboding decision that could go down as one of the most shocking moments in modern American history. The jokes were, by and large, a secondary concern.

The Daily Show, and Noah, much like Stephen Colbert on his similarly unsettling live election show, had clearly prepared for a Clinton victory that the pollsters assured Americans would happen. What we got instead was a living nightmare; one that the audience and Noah's team couldn't escape from.

Trump's victory wasn't confirmed by the time the show wrapped up at midnight, but it was inevitable. Noah was aware of this, and his closing words were strikingly buoyant, and necessary. They made his election special not one of the funniest episodes of Noah's Daily Show, but one of its most consequential.

There are so many thoughts that we have right now, so many ideas. We can only wait to see what the results will be. I will say this, from chatting with some of the people here, from seeing the audience, and from feeling maybe what you're feeling at home: You can be dejected. You can be sad. But, I will say this: Don't let it turn into fear. Because that is the thing that Donald Trump has used to get his side to do something that they never should have done. So, stay strong. Stay positive.