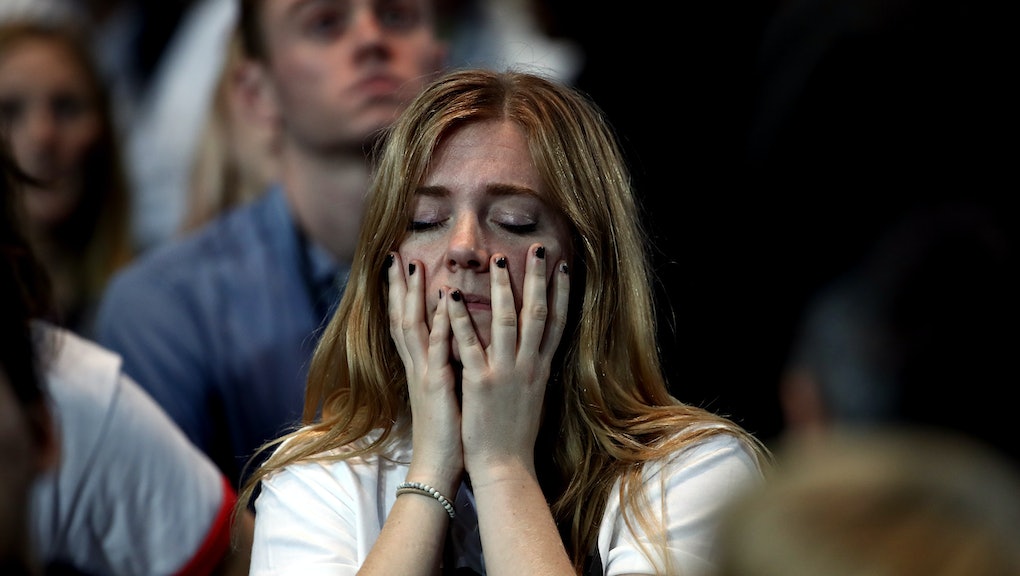 Does a Donald Trump presidency mean the end of abortion?

In August 2012, I was barely 23 and weeks away from a move to Berlin, Germany. The possibility that Mitt Romney, then the Republican presidential nominee and an "unapologetically pro-life" candidate, might unseat incumbent Barack Obama looked real; that women's reproductive rights might well be decimated by the time I returned, one year later; that the election of a GOP agenda might mean losing control over my uterus.

Were I to get pregnant during the Romney administration, odds seemed to suggest I'd be carrying that pregnancy to term. That just wasn't something I was in a place to do.

So I scrambled to get an IUD, eventually succeeding thanks to a round-the-clock stakeout of Planned Parenthood's phone lines after multiple New York City doctors declined to provide one.

On Nov. 9, 2016, my fears feel quaint. The American people have voted into the White House a pair of men who could not be unfriendlier to the humanity and reproductive rights of women if they tried. Will a Trump presidency, emboldened by a GOP-controlled legislature, mean an end to abortion? According to Dr. Willie Parker, Board Chair of Physicians for Reproductive Health, the outlook is grim.

"My colleagues across the country are deeply disheartened by the election of Donald J. Trump," Parker said in an emailed statement. "A Trump presidency will mean that attacks on access to abortion and all other reproductive health services will continue at the federal level and in states all across this country."

Parker vowed that his organization would "remain vigilant" in protecting access to reproductive health care, but implored the president-elect to "oppose all policies that harm the health, well-being and dignity of our patients." Unfortunately, the hope that the Trump administration will listen seems made to be broken.

Lacking even a modicum of the relevant experience his opponent, Hillary Clinton, possessed, Trump offers no clear indications as to what we can expect from him as a leader. Some conservatives, perhaps looking to comfort themselves while they held their noses and voted for their party's untoward nominee, told themselves Trump didn't mean most of what he said during the campaign. Bill O'Reilly, for example, attributed Trump's bloviating to "emotion," advising people not to take his rhetoric "literally."

But let's take him at his word. It's the only way we can best prepare for what might come. During the third and final debate, Trump made a frightening display of his dearth of knowledge when it comes to abortion: what it is, how it works and the terms of Roe v. Wade, the landmark 1973 Supreme Court case that guaranteed a woman's right to terminate a pregnancy up until viability. Emphasizing his intention to overturn Roe, he painted a graphic and fanciful picture of late-term abortion.

It is entirely possible that Trump was pandering to a zealous anti-abortion electorate: Before he became the quasi-politician he is today, Trump was unequivocally pro-choice. In a 1999 interview on NBC's Meet the Press, Trump explained that, while the thought of abortion made him "cringe," he absolutely respected women's right to terminate unwanted pregnancies. "I am pro-choice in every respect as far as it goes," he emphasized.

Then, in 2015, Trump the candidate presented with an entirely different position, declaring his intention to defund Planned Parenthood. He later posited that there should exist "some form of punishment" for women who get abortions, a statement he eventually walked back. But in June, when the Supreme Court issued its landmark ruling defending abortion rights in Whole Woman's Health v. Hellerstedt, guess who declined to comment.

Trump is a man whose actions have repeatedly demonstrated his disregard for women. He is a man who, it's been alleged, once threw a pile of cash at a 13-year-old girl he'd raped, telling her to use it for an abortion if she became pregnant.

But he is also a man of hazy intentions and murky values. What he as a president will mean for abortion rights is difficult to discern at this juncture. We can make some educated guesses, though.

In July, sources close to Trump's former opponent in the race for the Republican nomination, Ohio Gov. John Kasich, told CNN that one of Trump's sons had attempted to coax Kasich onto the ticket. Donald Trump Jr. offered to make Kasich "the most powerful vice president in history," in CNN's words, giving him free reign over all matters foreign and domestic. Which is to say, Kasich would have been the Dick Cheney to Trump's George W. Bush, but presumably with more responsibilities — Bush, after all, came into the White House with political experience.

Kasich turned down the offer, and Trump turned to Indiana's deeply unpopular governor, Mike Pence, a man who has built his career on torpedoing women's right to a safe and legal abortion. If Kasich's sources are to be believed, Pence is now stepping into Cheney's role. Women should be worried about that.

Before he became Indiana's governor, Pence was a U.S. Representative. In that capacity, he introduced six separate pieces of legislation aimed specifically at taking down Planned Parenthood, including a 2011 namesake amendment — the so-called Pence Amendment — that would have cut funding for the healthcare provider entirely. Considering that Planned Parenthood serves as an invaluable resource for millions of women, primarily low-income and minority women, each year, its disappearance is a harrowing prospect indeed.

"I long for the day that Roe v. Wade is sent to the ash heap of history, when we move past the broken hearts and broken minds of the past 38 years," Pence said while defending his amendment in 2011. In pursuit of his goal, Pence has been willing to shut down the U.S. government. He has proposed the redefinition of rape to fit his aims. He has backed narrowing the types of health insurance available to women. As governor, he threw his own state under the bus, allowing Indiana to plunge into what he later declared an HIV epidemic, solely so that he could close Planned Parenthood's doors. And, of course, as governor, he signed into law some of the nation's most extreme anti-abortion legislation.

Now that Pence is heading into a role that may well be a presidency by default, he has every tool he needs to tear Roe v. Wade to the ground. We are still looking at a Republican-controlled Congress, which — when one considers the outright assault the GOP has launched on abortion rights in recent years — is ominous.

The Guttmacher Institute summed it up in a July 2016 report:

Despite the impending entry of its number one opponent into the White House, Planned Parenthood stands committed to keeping doors open. In an emailed statement, Cecile Richards — President of Planned Parenthood Action Fund — pledged that the healthcare provider would continue to ensure that "people in this country can get access to basic reproductive health care, no matter their zip code, income, sexual orientation, race, religion, gender or country of origin."

"We will fight alongside our partners to make sure that the progress of the past eight years, including emerging from the worst recession we've had in close to a century, expanding healthcare coverage to more than 20 million Americans, breaking down barriers of discrimination and racism and upholding marriage equality, is protected," Richards said. "We cannot allow the acceptance of institutionalized racism, sexism and discrimination to become our new normal."

Still, Richards — who endorsed Clinton for president — added that "there are almost no words to capture the threat that this election result poses" to the country and its people. Because even as abortion providers continue their fight against the right wing, Trump's presidency raises the urgent problem of the Supreme Court.

The death of conservative justice Antonin Scalia in February left an opening on the bench that, so far, Congress has refused to let Obama fill with moderate candidate Merrick Garland.

Trump will undoubtedly fill that role with one of the conservative candidates on his list, meaning the court will continue to lean right. But what poses a greater liability for proponents of abortion rights is the age of a handful of current justices. Ruth Bader Ginsburg, 83, and Stephen G. Breyer, 78, are both liberal; Anthony M. Kennedy, a moderate conservative, is 80. It is not hard to imagine a scenario in which we suddenly find ourselves with three more openings for Trump to fill, which means the rulings Democrats have long defended — Roe chief among them — stand in peril, and will long after Trump has left office.

Does a Trump presidency mean an end to abortion? In all likelihood, it does. At least for a time.

In March, Romney stood on stage at the University of Utah and roundly denounced Trump's candidacy. He suggested that a Trump victory would portend the country's journey "down a darker, less free path." Vote for Trump and sacrifice your freedoms was the gist of Romney's warning.

In that speech, the former Massachusetts governor did not touch on the topic of abortion. Certainly, it seems hard to imagine he'd shed a tear at Roe's demise. But even Romney, who is far from a champion of gender equality, has condemned Trump's treatment of women. When, in early October, the Washington Post leaked a hot mic recording of a 2005 conversation in which Trump bragged about grabbing women by the genitals and forcing himself on them without waiting for consent, Romney took to Twitter.

"Hitting on married women? Condoning assault? Such vile degradations demean our wives and daughters and corrupt America's face to the world," he wrote.

Looking back on 2012 from the vantage of 2016, I cannot fathom how we got here: How we elected a man who is openly racist, sexist, xenophobic and also patently inexperienced, seemingly because he is racist, sexist, xenophobic and inexperienced. And I cannot fathom how I came to approximate agreement with Romney — who compelled me to seek a 12-year shield against potential pregnancy — on anything, but here we are.

And we can bet that in a Trump-Pence administration, women's rights do not have a place.