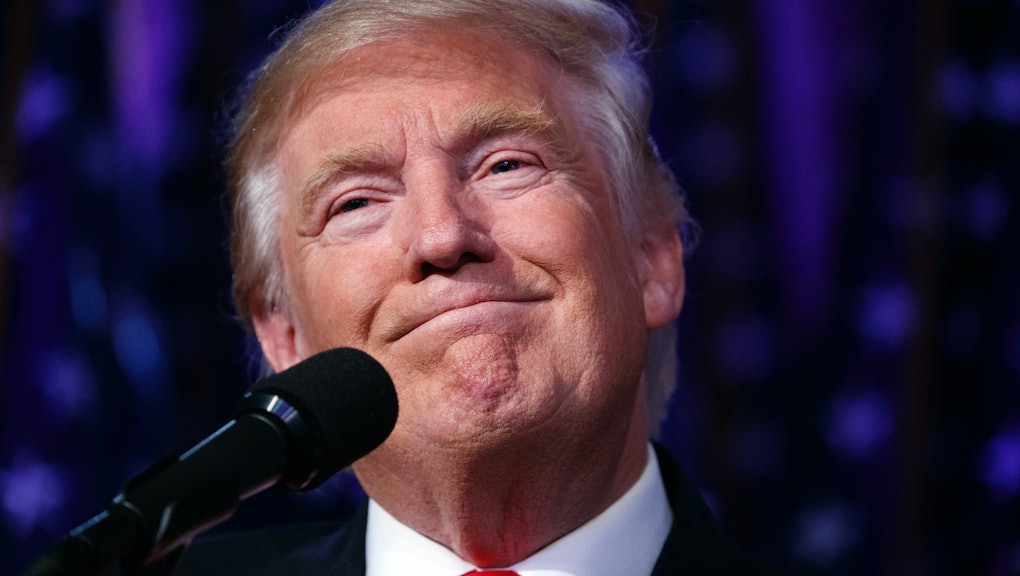 The electoral system was rigged — for Donald Trump

Donald Trump spent more than a year and a half claiming the system was rigged.

But it was rigged for him and against Hillary Clinton.

Trump won the election Tuesday night in an upset for the ages thanks to the Electoral College.

But he lost the popular vote to Hillary Clinton.

In plain terms, Clinton won more votes, but Trump will be president.

When all the votes come in, Clinton will have won the popular vote by nearly 1 percentage point, according to the New York Times' Upshot forecast. That amounts to hundreds of thousands of votes — a total that's likely to grow as California's votes trickle in.

When the Founding Fathers created the Electoral College, they were seeking to prevent candidates like Trump — a populist who struck a despotic tone as he vowed that he alone could fix the country's problems — from winning elections.

Alexander Hamilton wrote in one of his Federalist papers that the idea of the Electoral College was to prevent a tyrannical leader from taking power by allowing educated electors to determine the outcome.

"It was also peculiarly desirable to afford as little opportunity as possible to tumult and disorder," Hamilton wrote of the reasoning behind the Electoral College. "This evil was not least to be dreaded in the election of a magistrate, who was to have so important an agency in the administration of the government as the President of the United States. But the precautions which have been so happily concerted in the system under consideration, promise an effectual security against this mischief."

But the outcome of the 2016 election is exactly the opposite of what Hamilton and the rest of the architects of American democracy intended.

Trump, who educated elites have warned is too ill-prepared and ill-tempered to be president, has won.

Even more ironic is that in 2012, after Mitt Romney lost the presidency to Barack Obama, Trump tweeted that the Electoral College was, "a disaster for democracy," despite the fact that it is now what will allow him to occupy the Oval Office.

And for Clinton, who voters by a wide margin thought was the most qualified and prepared for the job, according exit polling, winning the popular vote but losing the presidency is one final indignity she must suffer.

It is now the second time she won the most votes but lost an election.

In the 2008 presidential primary, Clinton won more votes than Obama in the primary, but still came up short.