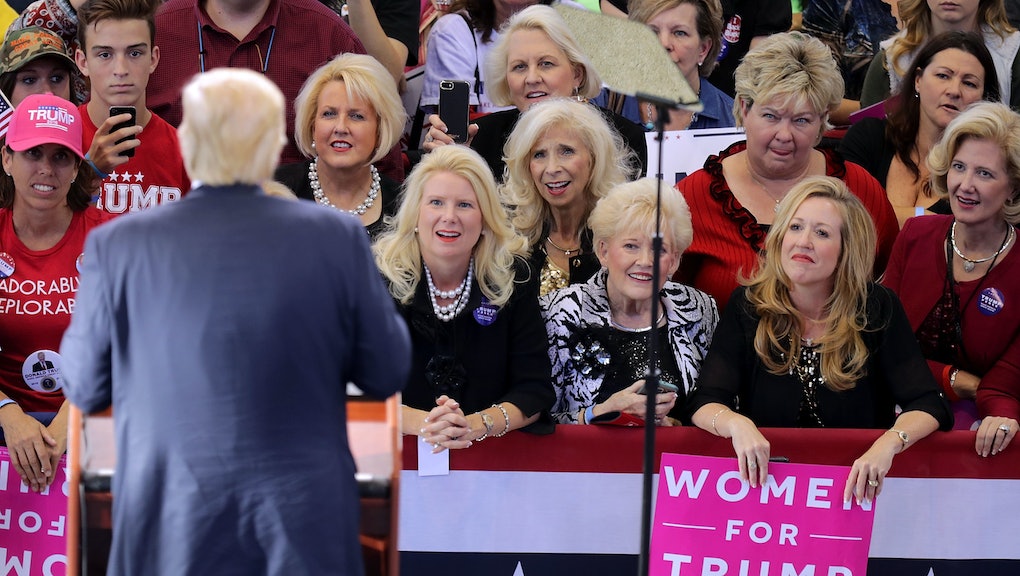 I wanted Hillary to cry the day after. I wanted to see that fierce, strong, inspiring woman — a woman who has fought so much harder than I ever thought I'd have to fight for anything, because I am a young, privileged white woman — I wanted to see her shed tears with dignity. I wanted to see her normalize an expression of pain that isn't masculine rage, but a more "feminine" display of turmoil. I wanted to have her represent me one last time.

Instead, Hillary Clinton smiled and apologized when she gave her concession speech on Wednesday. The first thing she said to the American people was "I'm sorry." Her response to the outcome of this historic election wasn't tearful, but it was markedly feminine. Women are always saying sorry. We are always trying to make amends for taking up space in the world.

And yet, the ascendancy of Donald Trump to the nation's highest political office happened, in part, because of the unapologetic actions of female misogynists. Many, many women — most of them white — voted for an accused rapist, a known bigot, a paragon of toxic masculinity, to be the next president.

According to exit polls, 53% of white women, many of them college-educated and many of them young, chose Trump. In doing so, they didn't just turn their backs on an opposing candidate who happened to look like them, a fact that is in and of itself historic; the female misogynists who voted for Trump stood on the backs of others — people of color, immigrants, LGBTQ people — to maintain a social order in which they too are second-class citizens.

These women haven't been hiding. In the early aughts, the feminist writer Ariel Levy popularized a term to describe women who objectify themselves and others, thereby contributing to a culture in which men can also demean and diminish them. She called them "female chauvinist pigs." Trump's win wasn't borne of chauvinism alone, of course: It is the result of a brutal combination of misogyny and galvanized white supremacy. It is hatred. It is disdain. It is disrespect and dehumanization.

It is a sign that a plurality of Americans don't believe anyone who isn't a cisgender, heterosexual white man deserves full personhood.

Female misogynists were with us — or, more specifically, with Trump — throughout the campaign. The "Ivanka voters" who didn't deign to attend Trump rallies, wear MAGA hats or put signs in their yards largely stayed quiet until election day out of political expedience. They tried to save face and avoid allegations of racism and sexism by tuning out the facets of the Republican campaign that would make them racist and sexist by extension.

"Most of these women aren't at these rallies, because Donald Trump's entire campaign, including the circus that's accumulated around it and the rhetoric that's flooded from it, is an inconvenient truth they'd rather ignore," Anne Helen Petersen wrote in a recent piece for BuzzFeed. "The best way to ignore it, of course, is to stay silent — and thus ensure they don't have to have a conversation, or articulate a defense, of what their vote implicitly endorses."

Make no mistake: A vote for any part of Trump's platform is a vote for the entire gamut of bigotry on which he's run. The proportion of white women who supported him is a damning and disheartening example of how intersectionality works, and of why a unified feminist movement is merely an idea. We each see the world through an individual lens of our overlapping identities, and for white voters of any gender, white won over everything else. Maintaining white supremacy required upholding sexism; it also required female voters.

White masculine dominance was never going down easily. And white men were never going to be the only ones to protect it; that's not how our prejudiced patriarchy has stayed intact for so long. White men are powerful, sure, but they can't maintain institutionalized sexism, racism and xenophobia all on their own. Women have helped them — a lot of women. This time, providing that help required female misogynists to ignore their own humanity and the humanity of others by necessity. Taking the country back means giving control back to the people who have always had it.

So many of us should feel used to having leaders who don't simply fail to represent who we are, but who do not care to understand us either. Leaders who don't just fail to see us, but who stand against us too, resolute to treat anyone who is different from them as less-than for as long as the electorate will allow. We should be used to this feeling, but this time it's different. Everything feels changed now because things stayed exactly as they've always been.

Neither the male nor the female misogynists who voted for Trump will be forced to apologize for choosing to keep hatred and division the status quo, just as the president-elect has never been forced to apologize for his violent treatment of women. Love, such a vulnerable, feminine emotion, did not trump the self-hatred that propelled this election. For that, Hillary Clinton apologized. But we should all be sorry.